Who is "solarspawn"? Four days and a 43-page thread after his first appearance on the Something Awful Forums, it's still hard to say for sure. But here are some KNOWN FACTS: solarspawn has several Web sites, all of which should be of great interest to Awful Link of the Day enthusiasts. (Navigate them with your number pad!) solarspawn writes many, many inscrutable words on the Internet every day, and has been doing so for years. Will SA ever hear from solarspawn again after his [in?]auspicious introduction? Many Goons are already hoping not! 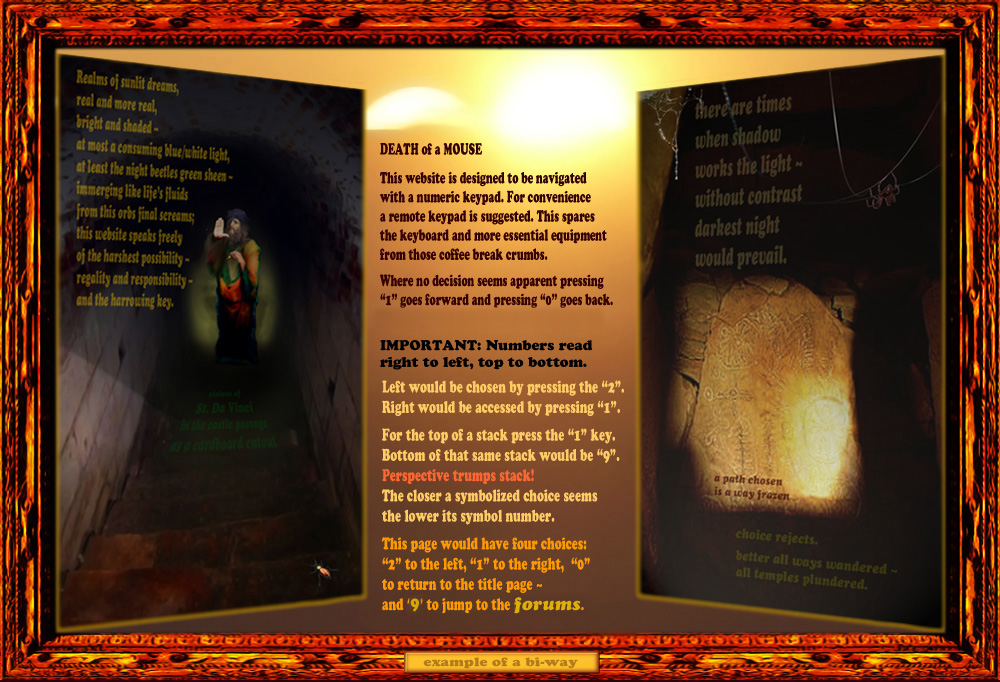 solarspawn first appeared on the SA Forums last week, with a thread titled "The ARTS applied to real problems." While seemingly well-intentioned, the thread was a poor fit for the comedy-minded General Bullshit forum, and solarspawn's writing was a poor fit for readers of English (and presumably other languages). The tl;dr version: solarspawn obliquely solicited suggestions on how to use creative processes to rehabilitate the brain-traumatized.

"The arts generally are applied to real problems, if round about sometimes, but I am looking for input on applying creative energies in artistic mediums towards resolving issues more consciously. Some I address in my own work are more efficient encapsulated solar energy applications, devices to aid artists stricken with physical disabilities, software and graphic aids for brain trauma therapy, new approaches to layout and execution of graphics for 3d sky boxes, new concepts in web presentation and navigation, sculpting methods that can be applied to manufacturing methods (and the reverse), just to name a few.

Much of my work is becoming centered around human rehabilitation, but the concepts are the same across the board. I went through a period of applying artistic sensibilities to doing manufacturing facility rehab. It begins with the conviction that what we are as artist can be aimed at far more than a canvas.

The project on at least one front burner right now is brain trauma rehab in high/low functioning victims. The most recent I am working with lost sight, speech, and mobility, but fought her way back to low functional on her own ~ no small feat. She needs some therapy more engaging to progress further and I do have her on my own odd regimen, but am looking for some/any input to develop exercises for her and others that can be worked into a website. Would sure appreciate any suggestions, even if farfetched. She and I have scorched out some doozies, but compromised them down to some very workable concepts. With others in the past, in desperation I have attempted some rather zany tricks I really can claim no science for. With nothing more to lose one tries more than can be proven. It is like prayer; I don't hold that it works, but in a foxhole... maybe." 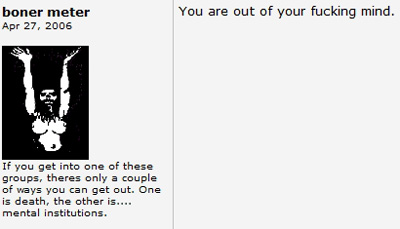 solarspawn's retort: "I like to think so. But, the down and dirty is, in or out, this is the fucking bestest most fun place to be. Take a look at my work and output. You should be so out of yours."

solarspawn returns fire: "Look kids, this is a serious request for input for serious work to help those in serious need. You really do not need to respond if you have nothing to offer. PLEASE, try to post like fucking grownups."

It looks like PopeScotttheOnly finally got a chance to check out solarspawn's links:

And it looks like a frustrated solarspawn has already reached his boiling point: "I didn't realize I had thrown ten bucks into a pile of dirty diapers. I thought this was a board for grown ups. I will leave you brats to your playpin."

solarspawn has already left for good! But that doesn't keep the ol' diaper pile from shitting up his thread, even though he will obviously never see their trenchant barbs, because he is gone, dammit, and he isn't coming back!

Madcosby: "I'll translate. Creating art has potential as a medium to help people overcome physical disability. As you can see from my websites, I am mentally disabled and am part of the program. Like Shutter Island, I think I'm part of the doctors and services provided by the rehab clinic, and not a patient. "

solarspawn: "That website is just begun. Even when well along it is not going to be easy for the mentally lazy to navigate. If I were you I would stick to a standard HTML format for dummies. Standard HTML is designed for those of low intelligence. My websites are all experimental. They are not designed for ease of use. The are designed to push the envelope. Most of it you cannot view because you do not run Incubator and it will not be the web standard until (at least) the end of this year."

Madcosby: "I look forward to the arrival of Incubator: The Browser To End All Browsers. Finally, I can get rid of my childish, preschool scroll wheel and start mashing my numpad like a gentleman."

The Worst Unicorn: "Look man, not every one of us has a magic pony muse. You should be more sensitive, I had to press 9 a lot to find your wellspring." 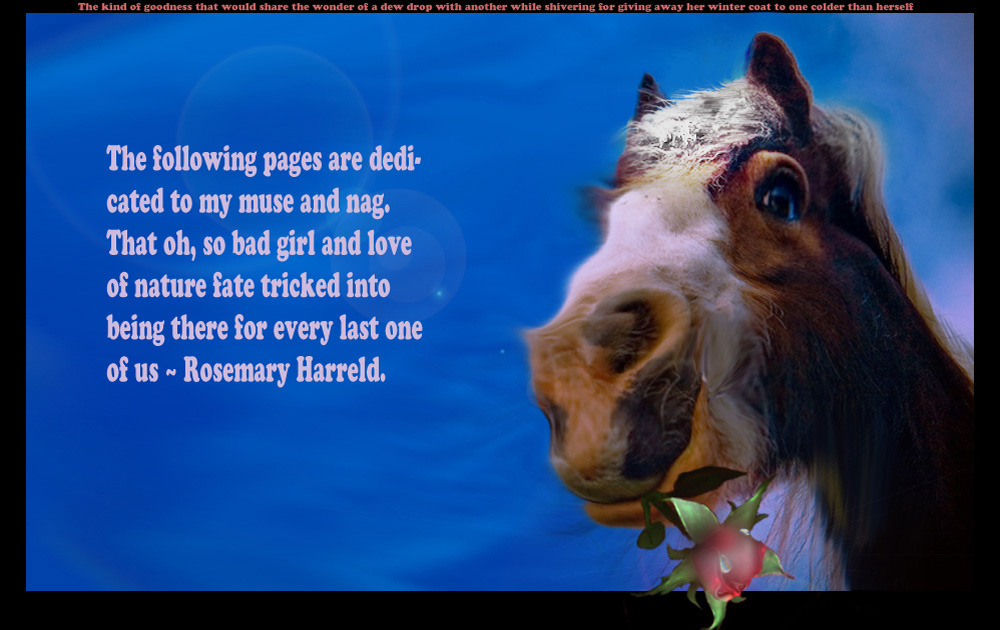 Pope Mobile: "Horses don't eat roses what it wrong with you?"