I'm a big fan of metal. Also, I've always been rather indifferent to cruises. I never thought these extreme points of enthusiastic support and profound disinterest could ever intersect, but somehow they have, and apparently I round down to not giving a fuck. 70,000 Tons of Metal places 40 bands (10 of which have been announced) on "The Majesty of the Seas," a Royal Caribbean cruise liner booked for a five-day voyage from Miami to Cozumel, Mexico. You can even "hang out with your favorite artist in one of the hot tubs," because who hasn't wanted to get bubbly with Sodom? 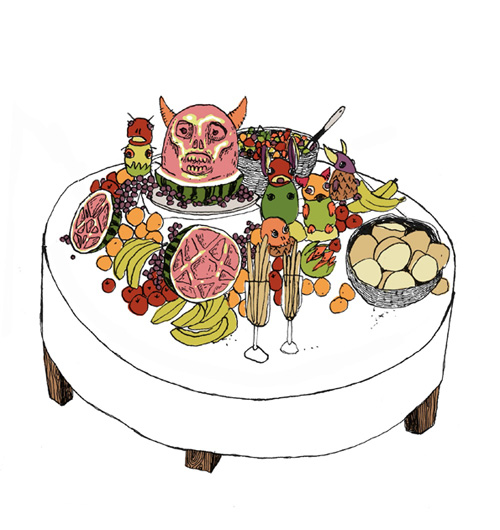 At first, it might seem excitingly appropriate to watch Amon Amarth perform Viking-themed songs on a sea vessel. But some of the more impressionable spectators might actually start believing themselves to be Vikings, and then you've got a rape-and-pillaging spree on your hands, on the lawless international waters. This event might make sense at first, given that the average metal fan is clearly a wealthy adult with a craving for exotic luxury recreation, but it seems inevitable that this will end with people leaping overboard, then gnawing their own arms bloody in hopes of finding sweet escape in a shark's gnashing jaws. At least casualties can be immortalized by a Finntroll sea shanty. 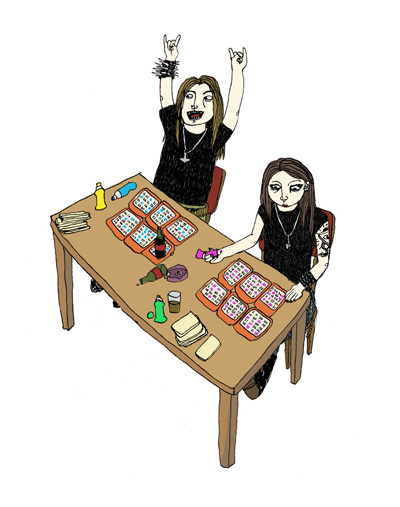 Passing the time between bands with a little bingo.

Thanks to Ali Horn for these awesome illustrations! Visit this site to see more of her work.