Dungeons & Dragons had its share of superfluous source books prior to Second Edition, but it was in the 2E era that the practice dragged TSR down. 1991's Tome of Magic is considered by many one of the best source books of the era, introducing Wild Magic, new spheres, and tons of spells and magic items. Was it essential D&D or a grab for more money? Does a bugbear shit in the woods? 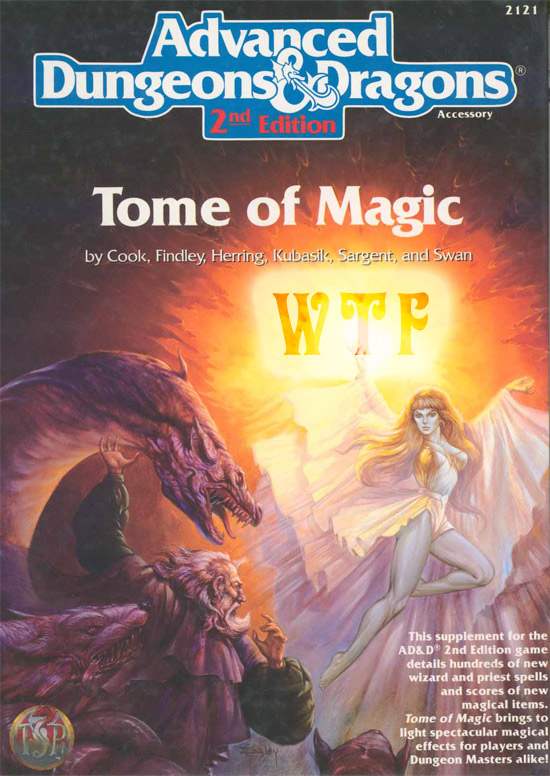 Zack: Nothing sexual going on there, just a wizard preparing to assault a woman in lingerie with his purple serpent.

Steve: Hey, you know what, it's a fantasy game, and my fantasy is a hot ghost babe flying around a cave shooting magic at a wizard.

Steve: Ugh. More women? Table girlfriends are the worst dude. Jamie used to bring his girlfriend Cheryl to my Waterdeep campaign and she always forgot her character, always made a cleric, always got bored after like an hour and would just roll a pencil around and draw little flower designs on her character sheets. Usually we had to end early because she would get in these whispery conversations with Jamie and he would remember he had to do something the next day.

Zack: You're not listening to me, Steve. Maybe she would have taken a greater interest if the adventures offered up something that would interest a young woman.

Steve: Alright dude I get it. Spend the first half of the session in the tavern trying to eat yourself past your problems, then ride a horse around and craft a magic item. Then spend the second half talking about that.