Home of Us, submitted by Nothing. This site was created by a group of teenage Australian girls who spend their free time drinking lawn fertilizer and whacking each other in the face with 2 x 4's. At first I thought that this was just another teen site talking about girls who like boys like they're girls but they're boys. Those are the ones which you normally find on Geocities or Angelfire that inspire suicide by self-immolation. But upon closer inspection, this site revealed itself to be even more hideous and appalling than I had ever expected. The levels of stupidity and overall ignorance necessary to create this disaster are beyond even my comprehension, and boy can I comprehend high levels of stupidity. If you don't believe me, remember that incident with Lou. 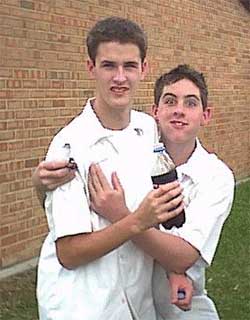 A special greeting from the site's creators:

Welcome to our site, hope u like it.
This is by our group of guyz n galz that go to Narara Valley High (australia) in year 11. We made this so we have something to do when we are bored and its ended up huge!!
If ur here and u don't know us, look at our About Us page (which is under construction!) ... and say hello to us in the guestbook or message board cos we love visitors!!
I'm suprised if u can be bothered going through it all but theres some funny stuff here and there.
Tell us ur thoughts or just say helllooo on the guestbook or write on the message board... love to love ya and keep coming back!!
xxxxxx all of us

That just makes me feel all warm in warm places. But the best part of this site is its gossip page which details events in the lives of these sorry fast food employment-rejects Usually revolving around a couple, the chronology basically proceeds as follows:

Leisel & Joshy
What started off as a cute couple went a bit sour for a while due to an unknown problem, and now it seems they are getting back as friends. But does one of them want more than that? Time will have to tell...

UPDATE:
It is presumed over but Josh is still keen. Please Leisel, be opened minded, I KNOW Josh is!
UPDATE #2:
ITS ALL OVER... for now...
UPDATE#3:
Josh is more interested in cucumbers than he is girls. All those present on movie marathon night as witness's.

Leisel is mentioned at least 40 more times on the page as being with variously assorted men. Boy, that crazy Leisel sure gets around! She's faster than my Uncle Pete's lawnmower that he got on sale from Sears last month because it had a hole in the gas tank. 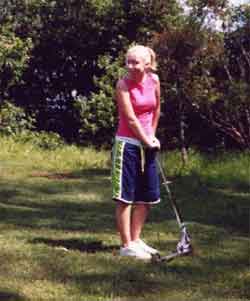 This site is absolutely full of worthlessness and crud, not necessarily in that order. In another section, aptly named "~*~Polls~*~," the gang debates deep theological subjects such as, "Did dinosaurs really exist?" The options in this poll are:

-hahahah - no way, where's the evidence!
-Come off it - just big birds!
-I dunno, maybe! but they are little too ugly to be real!
-Yes - all the research shows they did!
-What kinda question is that - of course they did!

The only thing that will be debatable is whether the creators of this heap of garbage actually existed after I grind their faces to a fine paste on the belt sander in the tool shed out back.

The monkeys write reviews, too!

SHREK
well i wanted 2 write about it

It was so funny, i wasnt FORCING LAUGHS OUT EITHER. i think i got stuff that sum other ppl didnt and i was like oh, but ahahahah anyway!
its funny, its a "Childrens" movie, but its not. Theres the things that kids would laugh at, and then things that Teenagers and Adults would laugh at and get. I got both.
But i think i would go and see it at the movies again, if i went with littler kids, no offence guys.
And i said "Hmmm maybe i shoulda waited for thsi to come out on video" meaning, maybe i coulda spent the same amount of money, got the movie and sum snacks and had as many ppl ove all for the same price. So i spose you can say that with any movie yeah?
Did i mentioned i loved the Donkeys head! Eddie Murphy was the voice, i was just waititng for him to laugh, but he never did!
Anyways i am giving shrek a **** outta 5

this was gonna go in the journal, but i chnage dit to here! by shannon