Funny Things to Say to a Guy Drinking out of a Sports-Style Bottle!

Hey, it's spring now, which means it's the start of what we in the Midwest call "water-drinkin' season." After a winter spent as a hibernating husk, it's time to brave the muggy heat with a canteen on your hip! If you're going to a gym, you should probably bring a sports-style bottle instead of a canteen, or someone will look you dead in the eye and say something like (mockingly) "hey buddy, take a hike with that thing!" or (poignantly) "you're a better man than I am, Gunga Din." However, if you do bring a sports-style bottle, be prepared to face these witty barbs from FYAD's list of hydration quips! 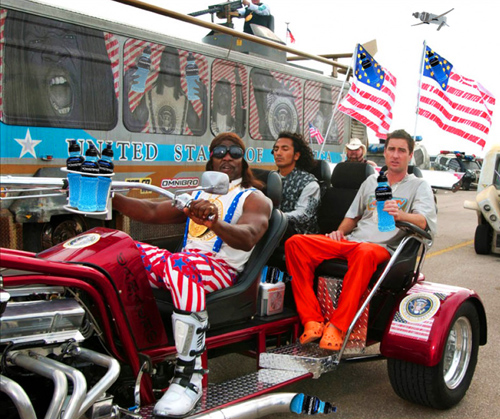 Football Guy: Sometimes we freeze up the sports drinks and make lil slushies out of em. Hydration and fun, woouah.

[at the gym] doing some reps on the water bottle huh. I prefer the bench press myself. Just kidding - stay hydrated.

*Searching pockets* Let me guess, plain water again? Jesus Christ. *Finds Crystal Light packet and tears it open* Yeah that's all well and good for some people, but me *Pours contents of packet into my own sports bottle* I actually like flavor in my beverages. *Shakes bottle, uncaps it and takes a long swig* Fucking homo.

[if the guy drinking is gay] hey, I see you're enjoying sucking on that water bottle. Sucking it right down and drinking the fluids. *mimes sucking a woman's titty* freud much