Wednesday, Jan 17, 2007 by Dr. David Thorpe (@Arr)
In the last edition of Your Band Sucks, I called upon my readers to send me their own CUSTOMIZED WEB 2.0-COMPLIANT picks for the worst music of the year. This week, I'm delighted to present the best of the reader submissions! There were way too many good ones to use, so don't be too offended if you sent one in and I didn't include it. I read and enjoyed all of them, and I'd like to thank my genius readers for all the great contributions. 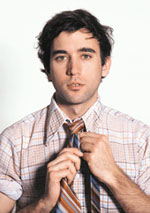 If there's one artist this year, whose music more than any other, has made me want to spend even less time with my indie listening friends, for dread that they'll somehow end up listening to that artist's music, it's this man.

Recognizable, in image, for doing retarded things like habitually wearing a dumb pair of wings during his concerts, and taking irritating press photos involving himself wearing a boy scout uniform, in what one assumes is supposed to make him look candidly dorky, quirky, earnest, and possibly a little ironic, but instead comes off looking either as if he's some sort of awkward, autistic man-boy, or a creepy, deranged member of the National Man Boy Love Associating, waiting at a troupe meeting for new victims.

He is hailed by his fans for his prolific work, here meaning Sufjan Stevens has the intention of recording 50 albums, one dedicated to each of the states in the US. Listening to just one of these records, with its insidiously precious-to-the-point-of-making-me-want-to-vomit, sugary, pseudo-pop bullshit, and knowing that there are at least 48 albums this fucker has left is enough to make me want to put on a baby blue sweater vest, and, grinning with his music's nauseatingly safe warmth, grab a kitten, the CD player and a toaster for good measure, and take a nice hot bubble bath, as I " Feel The Illinois", as the cover of one of his albums encourages me to do ( another hint that he might either be touched in the head or a pedophile).

Sweet mother of mercy, what necromancer in his/her right mind would take the time to resurrect the body of a dog faced British jaywalker and have it possessed by the souls of an unknown autistic child and the hilariously suicided Rob Pilatus (of significantly less hilarious Milli Vanilli fame)? Fergie looks like one of my sluttier aunts after a few dozen too many Botox injections, sounds like every dumb white suburban teenage girl who raps with her friends in a Spencers, and acts like the insentient survivor of a botched lobotomy. The most horrifying thing about this horrifying thing is that if my theory about her zombie-like corporeality is correct (and I'm assuming that it is because it's more likely than the terrifying notion that she may be a living, middle-aged human), she probably can't be killed by anything other than a machete/gunshot/rocket/weapon of mass destruction/nuclear warhead to the skull and will probably continue to exist long enough to upset us with a few more idiotic radio singles until her rotting flesh can no longer be preserved with zombie embalming juice.

While these 2 men aren't musicians, the amount of bandwidth taken up on their website by the worst "musicians" in the world deserves some recognition. In the pre MySpace days, it used to be that the myriad local bands would tack up flyers on telephone poles on their way to work at the gas station or the neighborhood indie record shop. But thanks to Tom and now Rupert Murdoch, the internet is the new telephone pole, and no one can rip the flyer down. Myspace is responsible for launching the "career" of Tila Tequila. If you don’t know who that is, don’t bother finding out, you’ll wish you hadn’t. Thanks to Myspace I know that (the) Plasmarifle is a death metal / hardcore / grindcore band from Montreal who are TOTALLY SERIOUS when they describe themselves as "five individuals, each having their own creative fingerprints and ingrained passion for extreme technical music" who have "set their sights on the world". If it wasn't for Myspace, no one outside of Tulsa would ever have to be subjected to the rock / alternative / metal stylings of Zen Hipster. This is really just the very tip of the veritable iceberg of shit floating around Myspace, waiting to tear a hole through the hull of your discerning ears and let the awfulness flood in. Thanks for giving these bands a platform, Myspace. Thanks for nothin' Tom and Rupert.

It hasn't changed at all since its birth, and neither has the winner of this award.

When listening to any of Wolfmother’s wankery one asks oneself “Who the hell do they think they are?” The question is answered even before it is asked: they think they are Led Zeppelin, and they’re trying their damnedest to fool everyone else. It’s like when that sad, geeky kid at school starts to adopt the mannerisms of one of the popular kids, only the popular kid is a dinosaur obsessed with white blues and Tolkien. Their lead singer even takes it a step further, looking like a hobbit as he does. Many folks have called their music “refreshing”, but it doesn’t take any significant amount of taste to realize that they would have been posers even in the early ‘70’s. Poseurs, even. Yes, I own Guitar Hero II, but if I have to play that piece-of-shit “Woman” song one more time I’ll have to try to make like John Bonham and choke on my own vomit. Youtube “Mike Patton” and “Wolfmother” and you’ll see his reaction to the song, which mirrors my own. He’s quite pretentious, to be sure, but he asks the questions Wolfmother inevitably provokes: “What year are we in?” “Are people this stupid?” Two thousand fucking seven. Yes. Oh, and they have a stupid name.

Imagine you are in some war torn African country, perhaps on a UN factfinding mission with other celebrities, where your sole job is to watch miles-long caravans of child sex slaves shamble across the desert wastes. Now imagine your horror when you discover that these children have been so thoroughly warped that they completely identify with their slave-drivers and want nothing more than to be beaten with elephant hide whips until their ribs fall out. This is what you should be feeling every time you watch the musical montage at the end of each episode of the show "Scrubs."

While this is not technically an award for a musician, it is appropriate to recognize the work of other media formats that contribute to the degeneration of music. "Scrubs" excels far beyond any other in this pursuit. Set to the neutered voice of Zack Braff, each episode features a music sequence in which every character has a moment of emotional 'authenticity' or something. That's lame and deserving of punishment but outside the purview of WGD. What's truly awful is the music used, or rather abused. It always sounds like someone trying to imitate the totally badass cover band they heard playing "Yellow" at a college bar ("Dude, the guitarist is the TA for my History of American Music class!"). What makes this even worse are the economics of the music and television industries. This means it is cheaper for the Scrubs creators to seek out these infinitely hollow copycraps and pay them instead of Coldplay to create a watery, nearly translucent excuse for a genuine turd. And every time this airs, some kid sitting in his dorm room sees it and thinks: I could do that. Oh, poor child, you are more right than you know. The only hope is that someone makes a computer program to do the work of refabrication for free, and then mails every rock critic a loaded handgun to kill him or herself with.