Men Who Stare at Goats bores man who stare at screen 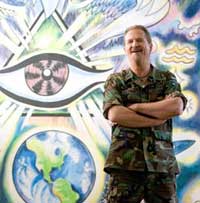 The Dude will save the world using his PSYCHIC POWERS!EXPECTATIONS: Ewan McGregor can't do accents. I find it baffling that he is consistently granted roles that require him to attempt an accent other than Scottish when he manages to fail consistently. I don't even know what kind of accent he was going for in Angels and Demons. That said, the trailer for this looks genuinely hilarious, with the rest of the cast in good form. Plus, Clooney is definitely on top of his game right now.

REALITY: You know that feeling where you're disappointed, but it isn't quite strong enough to justify its own explication? I wasn't ready for the light, mediocre fluff of The Men Who Stare at Goats, having been led to believe that it was some kind of comedy masterpiece from the trailers. During the film, my feelings about it kept shifting from "deeply flawed but great" to "really dull with some highlights". In the end, I decided that there is far too much wrong with the film for it to get a pass.

Ewan McGregor, fired by a mildly amusing pre-title cameo from Stephen Root, goes on a mission to find some psychic spies from the American government, except he doesn't really mean to, but he really does mean to. He finds George Clooney in Iraq, who is also on a mission to find someone or something or nothing, except he isn't really, but really he is. McGregor describes Clooney's flashbacks and flashbacks within flashbacks about how Jeff Bridges changed the world, but didn't, but did, and was at odds with Kevin Spacey, but wasn't, but was and then suddenly it's the third act and everything stops.

I feel like I may be being unfair, because I did laugh and there are some great performances herein. Clooney is especially superb, basically carrying the entire film on his shoulders. When he isn't on screen, you really wish he was, even when you're watching Spacey and Bridges.

The problem with the film's sense of humour is that it's just so damned obsessed with being wacky and zany and waaaaaaayyyyy out there that it forgets to connect with its audience, or doesn't know how to. Every moment of screen time that is constructed and programmed to be outrageously hilarious would've been better spent telling the damn story. We really don't need to know how Clooney learned his kooky knife-fighting technique, or how his father discouraged dancing because he was homophobic. It's kind of funny, but what's the point otherwise? 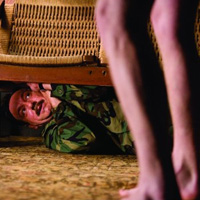 That's not a goat he's staring at.That issue -- pointlessness -- brings me back to the number one problem with this film: Ewan McGregor. I used to like McGregor a lot, but I've found him increasingly irritating as an actor in recent years, probably because of the whole accent issue. However, it's not necessarily his performance that is at fault here, but rather his character. I don't know why Bob Wilton was included at all, other than being based on the author of the source material. His sole reason to exist as a character is to subject us to an endless voice-over narration in McGregor's implacable space accent. The narration itself is painful to listen to, describing and explaining everything that is happening on screen, even reminding us of characters' names and motivations, just so we're not confused.

On top of that, having Ewan McGregor make constant Star Wars references felt a little self-serving -- no, make that very self serving. At one point he proclaims that Bridges' character "loves the Star Wars movies," and so the psychic spies are Jedi warriors and Spacey is a practitioner of the Dark Side. He even needs to have Clooney explain to him what a Jedi is. I know this might seem funny, but in reality there's no way a man of his age in this time period has not seen or heard of Star Wars.

The Men Who Stare at Goats offers plenty of laughs but no solid structure to hold them together. By the time the third act started, I thought maybe I'd dozed off or a reel had been skipped, because the film spends so much time filling your head with minor details that the sudden washing over of the climax is a real let-down. The second and first acts are pretty much presented in reverse order, which means that by the time we're done with the second act and are ready for the climax, we're still forced to wade through torrents of back-story before we can get there. This, this is the downside of nonlinear storytelling when it is improperly implemented.