You remember that feeling, don't you? Watching that Godzilla trailer, you thought, "Well, if anyone can deliver a film about a giant fucking monstrosity ravaging the Big Apple, it's the director of Independence Day. He knows how to blow shit up real good!" So you went to the theater, spent $10 on a ticket, spent another $10 on snacks (you fatass), sat down in a darkened theater and...gradually, you felt goddamn angry that you spent $20 on such a piece of shit.

Eleven years later, Hollywood still hasn't learned its lesson. YouTube is saturated with exciting trailers for Hollywood fare, 99 percent of which doesn't live up to the hype. Regular Awful Week at the Movies readers should know that we've given only one -- count 'em, one! -- positive review to a featured film; the rest have been delineated lists of the reasons why these movies were so massively disappointing. Well, we're mad as hell and we're not gonna take it anymore! From now on, each review will consist of the critic's expectations (which are usually positive) and the reality of the film (which are, at least this week, generally negative). Cleverly, we've called it Expectations vs. Reality.

As Sam Jackson said, hold on to your butts. It's about to get awful... 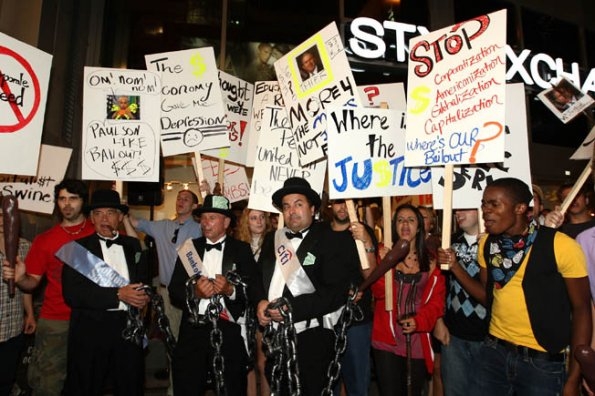 A few of Michael Moore's most devoted fans, eschewing rational discussion for hyperbole and slave iconography. Can't we just get past this partisan bullshit?

As he did during Sicko and Bowling For Columbine, Michael Moore will employ extremely hyperbolic stunts and dishonest editing techniques to get his point across. Some liberals will get fired up, but most will roll their eyes at the ammunition he's given the political right to target what they call the "radical left." Is it more effective to get a sit-down interview with a Wall Street executive, or to film yourself being thrown out of his office building after you yell at him over a megaphone? These films are, in a sense, not documentaries about social issues, but character studies on Michael Moore.

There's a certain frustration to be found in watching Michael Moore film a lower middle-class family being evicted from their house due to foreclosure. The amount they owe is a tiny percentage of this film's $1 million budget...and an even tinier percentage of Michael Moore's total wealth. He could have easily, with the stroke of a pen, paid off their bills and changed their lives. But that wouldn't have made a good film, would it? Instead, we watch Moore as he films the family getting kicked out of its house, ready to make millions on the backs of the evicted.

This sad truth is consistent with Moore's hypocritical hatred of the rich: Paying for their houses would present the wealthy in a positive light as benevolent people. Of course, there's no mention of any capitalist benevolence in the film, such as the $30 billion that Warren Buffett gave to the Bill and Melinda Gates Foundation in 2006.

There's a certain sense of irony in watching a man campaign against the very system that made him wealthy in the first place, like a fat man telling everyone to eat healthy only after he's had a chance to clean out the all-you-can-eat buffet -- an apt comparison, considering Michael Moore has no doubt given Dunkin Donuts its own golden parachute.

As in his previous films, Moore makes incredibly transparent "attempts" to get interviews with CEOs and politicians. Twenty years after he did the same in Roger & Me, Moore films himself walking up to the headquarters of General Motors, being stopped by the security guard and claiming that he wants to interview the CEO. When the guard tells Moore he needs a prior appointment for an interview, Moore makes his best attempt to feign shock at being unable to simply barge into the headquarters of a company and speak with a CEO. It's obvious that all of these half-assed attempts were going to end in failure. Otherwise, he might actually have to interview these CEOs for his documentary, and if he did that...well, he couldn't portray himself as some Robin Hood crusader being shut out from speaking with the big bad CEO. What does this accomplish? Nothing but a chuckle out of the latte-drinking liberals in the audience. Nothing to help his claimed cause of defeating capitalism.

Moore's political slant as a Democrat is obvious to anyone, and I was expecting such as I went into his film. Thankfully, he delivered.

His coverage of the TARP proceedings in 2008 portrayed it as a conspiracy orchestrated by Henry Paulson and the Bush Administration, only glossing over the involvement of the Democratic members of Congress. Moore portrays the passage of the bill as the Republicans "strong-arming" the Democrats two months before a Congressional election with tactics of fear and manipulation. This not only portrays the Democrats as spineless, but it also ignores the fact that half of these Democrats are recipients of millions of dollars in campaign contributions from the banking and housing industries, and that they are just as culpable in this crisis as the Republicans. Consider Democrats such as Christopher Dodd (D-CT), head of the Senate Banking Committee, who was involved heavily in the oversight of both Fannie Mae and Freddie Mac, and who receives the highest amount of campaign contributions out of anyone in Congress from said banking institutions. Or Barney Frank (D-MA), Chairman of the House Financial Services Committee, who pushed for reduced restrictions on home loans in the early '90s, and who received contributions from both Fannie Mae and Freddie Mac, the executives of which, like Dodd, argued that both institutions were financially sound all the way up to the collapse of the housing industry.

When Moore introduces Obama, it is accompanied by an angelic chorus, as someone who would save the day from the evil Bush administration. Moore even mentioned that Obama received his highest private donations from the banking industry, but, as Moore put it, the banking institutions were just throwing money at him to try to pay him off. He had no proof that Obama was not going to be influenced by the banking industry, only his unsound assumptions, two of which even James Hetfield could announce: "DEMOCRATS GOOD! REPUBLICANS BAD!" To his credit, Moore does cover the fact, early in the film, that Obama's Treasury Secretary Timothy Geithner, like former secretaries, was heavily involved with major banking institutions before being appointed to his post.

Moore's most frustrating miss, however, is ending the film without mentioning that nearly all of these people are still in power. Christopher Dodd, still in charge of the Senate Banking Committee. Barney Frank, still in charge of the House Financial Services Committee. The Democrats and Republicans who voted for the TARP funds and the bailouts, still in session. The recipients of the millions in campaign contributions, still in Washington. Most notably the President, the man who received the largest sum of private donations from banking institutions, still in office.

Moore ignores this as he wraps up his film. Perhaps it would anger his mostly liberal audience. Perhaps he ignores the truth of what is in front of him, that many of our politicians have been corrupted by campaign donations, by special treatment and by influence of the powerful institutions in this country. Does Moore wrap his film by arguing for increased regulation of the banking and housing industries? No. Does he argue for campaign finance reform? No. In a moment that would make any rebellious hippie teenager proud, Moore calls on you, the audience, to rise up against the capitalist evil. Instead of using his filmmaking to educate the audience, he proves once again that he is the master of making films that indict the right as masterminds of all that is evil in America, delivering another 100-minute slab of fat, greasy liberal pornography.

MINORITY REPORT: As a die-hard liberal, I imagine my experience watching Michael Moore films is akin to any rational, thinking conservative's experience watching The O'Reilly Factor. True to Matt's expectations, throughout Capitalism: A Love Story, I shrank further and further into my seat, wishing not to be seen in attendance of this train-wreck of a "documentary" by any future political opponents who might use said attendance to smear me. Moore's style, which was a precision tool of bombast and hilarity 20 years ago when he actually had something to say, has now become a parody of itself. Hell, Michael Moore could make a halfway decent documentary if he'd just stand outside his own house with the Megaphone of the Common Man. This isn't journalism, Mike; this is a cheap and divisive way to to inflame your legion of unthinking fans while inflating your own bank account (and Dunkin Donuts' coffers). -David "Data Core Devil" del Vacoté III