EXPECTATIONS: Having only seen one 30-second TV ad for this film, I feel like I know everything I need to know about this movie, mostly because despite being named Shark Night, it appears to take place during the day. Also, this film comes from the same guy who tricked the world into seeing Snakes on a Plane. He made that film R-rated just so Samuel L. Jackson could run around screaming "Motherfucker!" at snakes. This time, though, he didn't even have the decency to make an R-rated movie about sharks eating people. I expect Shark Night 3D to be a thoroughly forgettable experience on every conceivable level.

REALITY: I would like to think I'm man enough to admit when I've made mistakes. My first mistake was paying to see Shark Night (hard proof of the fact right here). My second mistake was assuming David Ellis was dumb enough to forget that his movie was supposed to take place at night. Finally, my third mistake was expecting this to be forgettable. While most of the movie is certainly a blur to me now, there are parts of Shark Night 3D that will be trapped within the crevices of my brain until the day I die. 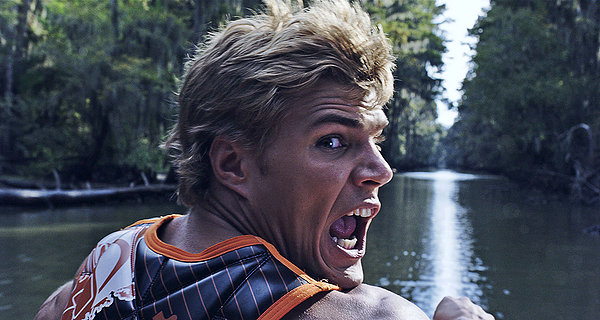 Like all good (read: terrible) creature features, Shark Night introduces us to an unlikely collection of young people on their way to an exotic locale, only to meet with an equally unlikely demise at the hands of some horrible, horrible creatures. In this film's case, the young people are students from Tulane University traveling to a lake house somewhere in the middle of the Louisiana bayou. Y'know, because nothing about that sounds like a bad idea. While having a totally awesome time wakeboarding, one of these students gets his arm bitten off by a shark. As it dawns on these people that there are sharks in the water, they slowly start dying off, because it never occurs to anyone to simply stay inside the lake house.

The first hour or so of Shark Night features people getting eaten by sharks. Seriously, that's all that happens for a good sixty minutes. This is broken up by scenes of our young people screaming at each other over whether they should go back into the water, but inevitably they do so because otherwise there would be no movie. In fact, the very first kill is almost a direct ripoff of the opening scene from Jaws. But until the big reveal as to why there are sharks in a lake in the first place, the film is stuck trying to coast on a handful of fairly bloodless kills.

Now here's where I'm going to spoil the twist to this movie, because those of you who would go see it probably aren't waiting for my seal of approval. So why are there sharks in the lake? It turns out some local rednecks want to cash in on the whole Shark Week craze. Their plan is to introduce a bunch of man-eating sharks into a populated lake area and then film the killings with shark-mounted cameras. Let's ignore the fact that these sharks are freakishly fast and seem genetically engineered by a team of brilliant scientists solely for the purpose of eating teenagers. This redneck twist turns the final act of Shark Night into a warmed-over pulpy mash-up of Jaws, Deliverance and Hostel. 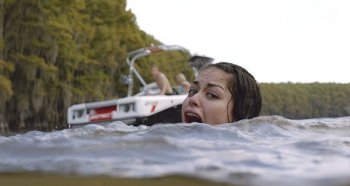 AAAAAAAAAAAAAAAGGGGGGHHHHHHHHHHH!!!Where director David Ellis really fucked up was in agreeing to make this a PG-13 shark attack movie instead of going for the R. Each of the films listed above plays one central conceit to its violent and sometimes gory conclusion. Shark Night tries to play all three at the same time, and the result is a film that has no idea which direction to take, and has scant little time to develop any of them anyway. Of course, it never occurred to anybody that since the movie is titled "Shark Night," maybe the focus should stay on sharks eating people. There's one decent scene in which a guy punches a hammerhead shark in the face and then stabs it with a whaling spear for good measure, but for the most part the film spends 60 minutes giving us shark attacks and the final 30 speeding through a get-rich-quick scheme.

I would have been willing to forgive the film for being so boring if the 3D shark attacks were at least interesting. They're not; in fact, I dare say they're the worst part of the movie. Half the kills take place off-camera, so right there we're cheated out of three or four potential 3D feedings. One character simply falls into the water, never to be seen again. I want to say Ellis is screwing with us, but he clearly just forgot. There's no gory dismemberment, no geyser of blood, nothing. Characters just unceremoniously exit whenever the budget demands they fire another cast member.

If I've learned anything useful from this ordeal, it's that Piranha 3D made way too much money. Any horror movie that makes more than twenty bucks is going to inspire copycats, and when the plot to that genre-spawning success is "Piranhas eat people in 3D," there's really nowhere to go but down. Shark Night features one cool 3D shot of a shark racing toward the audience, and then 89 minutes of me wondering why the hell I'm wearing two pairs of glasses.

For anyone unfortunate enough to be stuck watching Shark Night 3D, the film does have its moments. There's the previously mentioned hammerhead scene; there's also a scene where a guy gets shot, climbs a tree in the middle of the lake and then gets picked by a shark like low-hanging human fruit; there is also a wonderfully shitty rap video for those of you stupid enough to sit through the credits (guilty). If anything, I really hope that video finds its way to YouTube so it can become the ironic Internet sensation that it deserves to be. The movie itself, however, deserves to be sold off to SyFy Channel in time for its basic cable premiere next week.

MINORITY REPORT: The problem with sharks as movie monsters is that they're only as effective as the protagonists are stupid. Let's face it, The Shark Knight doesn't have a script even half as good as Jaws. - Ian "Professor Clumsy" Maddison, Esq.