Spy Kids: All the Time in the World in 4D

EXPECTATIONS: Robert Rodriguez seems to be operating under the illusion that smell is the fourth dimension. I think that's what happens when you're the kind of person who still thinks it's funny to have a talking dog sidekick that shoots metal balls out of its arse and then makes references to YouTube. It might also explain why he thinks Jessica Alba is a good enough actress that she should continue to appear in films. This is going to be an ordeal, isn't it?

REALITY: Ideally, this film would never be released in cinemas and all the students involved in its production would fail their classes -- apart from Jeremy Piven, but only because he outnumbers the faculty. I shouldn't leave a cinema feeling like I've been the victim of an assault, should I? Thanks to its ridiculous gimmick, this film assaults every one of your senses.

In spite of the fact that she is entering labour, heavily pregnant super spy Marissa Wilson (Jessica Alba) manages to apprehend super terrorist Tick Tock (Jeremy Piven). Some time later, she has retired and settled down with her new family. Her husband Wilbur (Joel McHale) is struggling to launch a television career, and her two step-children Rebecca (Rowan Blanchard) and Cecil (Mason Cook) are struggling to get along with their new step-mother. Suddenly, an international crisis rears its ugly head when Tick Tock reappears under the leadership of the evil Timekeeper (Jeremy Piven). Called back into action by her former boss Danger D'Amo (Jeremy Piven), Marissa leaves the kids alone only to have them discover the truth of her profession and spring into action as a new generation of Spy Kids with their talking robot dog Argonaut (voiced by Ricky Gervais). 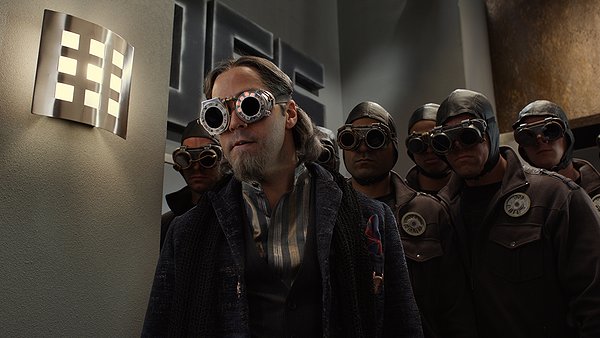 Let's get this out of the way right now, because I know your curiosity must be sated. The scratch-and-sniff smell-o-vision, or "Aroma-Scope" as this film has decided to call it so that it can fly under the guise of originality, is every bit as bad as you remember it being when it got done to death in the '90s. In this film you get to experience two different species of fart and three varieties of sweets. That's five out of the eight total smells you have to look forward to. I wouldn't worry about it too much, though, because everything smells like sherbert and cardboard anyway.

They don't even make much use of it, for all the publicity it has received as a terrible gimmick. We are constantly told by characters there is a funny smell or that they can smell something and it would seem like an ideal opportunity to introduce a new aroma, but I guess the budget was limited and they had to get all the farts in.

Now that we've got that out of the way, let's turn our focus to the even worse stuff: Everything else. Stuck for a place to start sifting through the shite, I thought maybe it would be a good idea if we began on the ground floor. So, how's the script? Well, I'm not entirely convinced there was one. In every scene, characters ramble endlessly about needing more time, taking the time to make the time for time when time is on time and out of time and gotta get back in time! The word "time" will lose almost as much meaning as the words "Jeremy Piven." In fact, just say "Jeremy Piven" a hundred times as fast as you can and you have some idea of how your brain will react to the third act of Spy Kids 4. 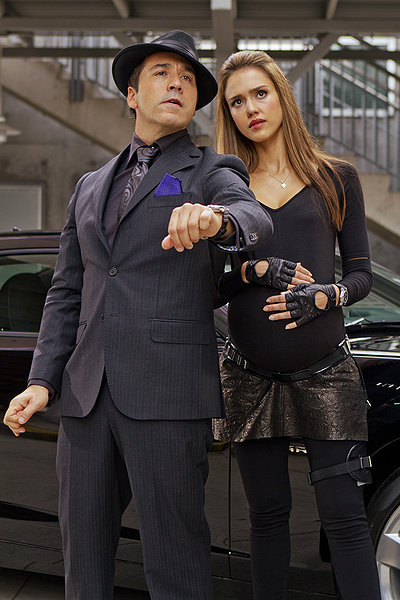 Jeremy Piven!!Even if there was a script, I'm pretty sure Ricky Gervais never received a copy. There are two kinds of talking animal in films: the kind that can talk directly to humans, and the kind that can only comment to the audience. Here, with Argonaut, it seems nobody could decide which one they were going for. The characters are aware that the dog can talk, and they do converse with it at times, but for the most part it simply comments endlessly on the events of the film and goes completely unnoticed by the rest of the cast. I imagine this happened because Gervais improvised a lot of his lines after the fact and nobody bothered to do anything to make it work.

Mind you, nothing else works here either. The visuals are so cheap and crappy that it makes you wonder why they bothered to set the action in such bizarre locations that can only be realised through green screen technology. Having said that, it's worth noting that the climactic set piece of the film takes place in the exact same location as a previous battle sequence. It seems a bit lazy on the part of the villains to just hang around in the same place after they already got blitzed there earlier. Maybe I'm overthinking it, as every set piece feels like a fight scene from the old 1960s Batman show, where the heroes approach the villain, a bunch of goons pop out, the heroes punch the goons and the villain makes comedic gestures and finally flees after all the goons are laid out. This happens about about as many times as there are Jeremy Pivens in this film.

At least Jeremy Piven is a good enough actor to pull off the multiple roles, even if his method of doing so is to overact with various digitally altered voices. At least we're not bombarded with multiple Jessica Albas. I've made my feelings about Ms. Alba known in no uncertain terms in the past, and I can assure you that I have not changed my opinion. The fact that Robert Rodriguez (or BobRodz, as I've decided to start calling him) continues to work with her is further proof of his failing mental faculties.

MINORITY REPORT: I tried to be a Spy Kid once. That's why I put a camera in the Current Releases bathroom. Mr. Jay Dub pees sitting down. - Tommy Simmons, Age 8