Jennifer's Body; The Informant!; Cloudy with a Chance of Meatballs 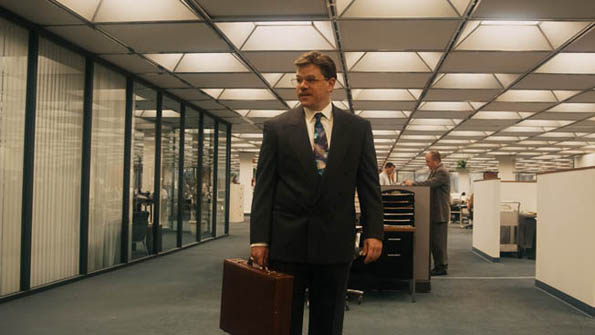 No, really, this upper-management schlub will take down a corporation. Really.

A couple weeks ago, I bitched and moaned about Extract being a comedy without any jokes. Steven Soderbergh's The Informant! is a similar comedy, only here's the catch: this film is actually funny. Instead of wallowing in his own blandness, the way Mike Judge did, Soderbergh takes the high road and turns his film into a sort of parody on the whole corporate-criminal genre.

Based on Kurt Eichenwald's book of the same name, The Informant! follows the real-life exploits of Mark Whitacre (Matt Damon), a biochemist and VP of a corporation that specializes in corn products. This gives Damon free reign to tell a series of lame corn jokes right up front. The film then settles into its plot, which involves Whitacre working with FBI agents (Scott Bakula and Joel McHale) when allegations of price-fixing start to surface.

On one hand, Soderbergh is riffing on movies like The Firm (which Whitacre watches and idolizes at one point in the film). Bakula's character explains things to Whitacre that are drowned out by Whitacre's inner monologues about shrimp or James Bond or wherever the hell his mind wanders. Stand-up comedians litter the film in brief, straight roles so that audience members will giggle and say, "Hey, Paul F. Tompkins! He's hilarious!" -- not to mention the random, wacky circus music.

On the other hand, The Informant! is an odd sort of character study. Matt Damon gives a remarkably genuine performance as a guy who may or may not be a few ears shy of a bushel (oh God, now I'm doing it). He's not the idiot-savant that the ads depict, but rather the textbook definition of an unreliable narrator.

The movie is rated R, but only because one particular character says "fuck" about nine times. This is a blessing, as it'll keep asshole high-schoolers from walking out because "it's totally not funny." The Informant! is funny, but only in that slightly over-the-top-yet-still-slightly-subtle way.