EXPECTATIONS: Mainstream American comedy doesn't exactly have what I'd call a wellspring of auteurs these days. Basically, you've got your Judd Apatows and you've got your Adam Sandlers. David Wain stands out as a modern comedy director with a very specific voice, but he's managed fairly limited success. He directed the recent classic Wet Hot American Summer, as well as 2008's surprisingly strong Role Models, which is the only good film anyone ever made about LARPing. I'm hoping Wanderlust will carry on Wain's offbeat brand of comedy, and that having Judd Apatow as a producer will help the film bring in the audience a David Wain film deserves.

REALITY: As punchline fodder, hippies are kind of played out. That's not to say that they can't be funny, but their comedic potential has been pretty much used up through forty years of incessant mocking and caricature. It's somewhat refreshing, then, to find that Wanderlust doesn't rely on that stereotype like a crutch. Sure, the hippies in this film are weird and do silly things, but everybody in this film is weird and does silly things. It's not nearly as thematically strong as Role Models, but Wanderlust definitely has its moments. 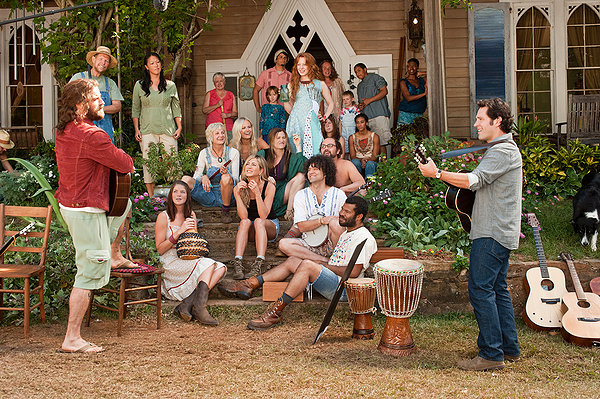 People relaxing and enjoying themselves in the daytime!? What next?

The current economic climate has not been kind to George (Paul Rudd) and Linda (Jennifer Aniston). HBO won't pick up Linda's documentary about penguins with testicular cancer; George's company is unceremoniously shut down by the Feds; and their glorified Manhattan studio apartment is losing value fast. The only thing for them to do is pull up stakes and head to Atlanta to live with George's asshole of a brother (co-writer Ken Marino). On their way, George and Linda spend the night in an "intentional community" named Elysium, a farm estate populated by hippies (Justin Theroux, Malin Ackerman, Kerri Kenney, Jordan Peele), nudists (Joe Lo Truglio), and Alan Alda. The two love the place so much they decide to stay a while and see if Elysium might be just the thing their big-city lives need.

The biggest problem with any comedy like this is that it lives and dies by how funny each individual scene is. With so much of the film's cast made up of veteran sketch comics, and so many scenes built around groups of people, Wanderlust might have seemed like an easy day's work. It's clear, though, that many of the cast members simply aren't trying that hard. A number of scenes lack any clear purpose, and half the cast winds up sitting around waiting to improv. The scenes between George, Linda and any one or two other cast members are fine, and funny enough, but when the whole group is together, the scene either devolves into chaos or remains inert. 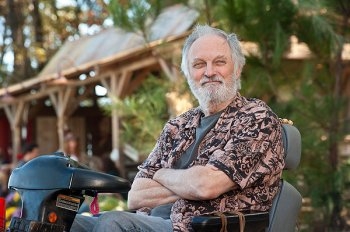 Today the role of Alan Alda will be played by Randy Quaid.Jennifer Aniston seems to have become a big comedic sticking point with some people, and I'm not exactly seeing where this is coming from. She's a fine actress when she's asked to be, but here it's pretty obvious that it's Paul Rudd's movie, so Aniston takes a back seat to Rudd's character development and winds up blending into the scenery. Sure, it might seem like a waste of such an A-list star, and perhaps it is, but she gets her share of screen time to be funny.

I find it interesting in this film that the white-collar suburbanites are every bit as neurotic and weird as the hippies of Elysium. When we meet George's brother, he's a surly alpha-male type who seems keenly aware of how easily he could lose everything the way George did, and losing the slightest bit of control in any situation drives him crazy. Of course, Ken Marino has always played this type of character, but here he's particularly good. There's something fundamentally broken about this man and his life, and yet he's achieved "The American Dream." He's got his own business, a wife (Michaela Watkins) whose name I'm fairly certain is pronounced "MRSA," and a son as surly and rock-headed as he is.

According to this film, that dream ruins people emotionally, and it's not just limited to the businessmen; alpha-hippie Seth (Theroux) has ulterior motives for Elysium that stand to gain him a lot of money (or at least what he thinks is a lot of money). It's striving for that perfect life that causes people to ruin the one they already have, and Wanderlust's ultimate statement seems to be that it's okay to be happy with what you have. It's a trite message, sure, but in a comedy that features a nudist-winemaker-novelist as a main character, I'll take my messages where I can get them.

Fans of David Wain and his co-stars from The State will find a lot to enjoy here, from the truly bizarre Truth Circle sequence, to Jennifer Aniston's peyote freakout, to comedy team Stella's cameo as a trio of idiot newscasters. There is plenty of oddball humor to be found throughout Wanderlust, though it never wanders as far outside the box as Wain's earlier sketch experiment The Ten. I hesitate to call anything in this film groundbreaking, but it's certainly the best absurdist mainstream comedy you'll see in theaters anytime soon.

MINORITY REPORT: Good job writing all these words here, Joe, but Wanderlust already made the greatest contribution to this website it possibly could. - Martin R. "Vargo" Schneider