Jennifer's Body; The Informant!; Cloudy with a Chance of Meatballs

Diablo Cody won an Academy Award for her work on Juno, but could Jennifer's Body be the first horror film to net a Best Original Screenplay statue? Probably not. 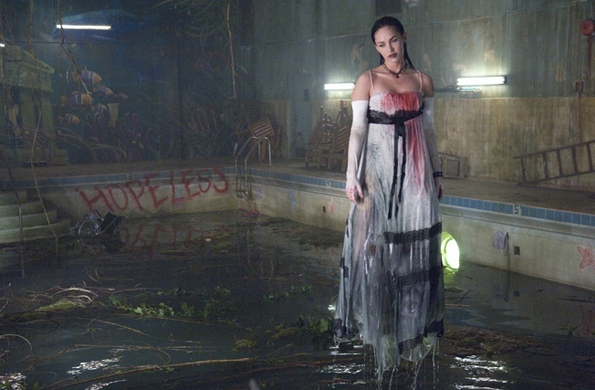 Let's get this out of the way: Jennifer's Body is not a great film. It might not even be a good film; I'd need to see it two or three more times to be sure. But it's not a bad film. At worst, it's an interesting mess, a smorgasbord of ideas and genres that never quite congeal.

Jennifer (Megan Fox) and Anita (Amanda Seyfried), who I refuse to call Needy despite her being addressed by that awful, awful nickname throughout the film, have been best friends since childhood. Jennifer blossomed into a cheerleader while Anita blossomed into...well, a wallflower, and a wallflower that suffers from Clark Kent Syndrome at that, considering the essence of her geekiness has been distilled into her glasses, which she can remove at will to expose her inner sexpot. Isn't about time we left this cliché by the wayside? I digress...

Jennifer cajoles Anita into accompanying her to a dive bar, where an up-and-coming rock band "from the city" is playing. After a horrific accident claims the lives of eight locals, the two are separated. When Anita sees Jennifer again, she can't help but notice there's something a little off about her -- maybe because Jennifer's eating chicken off the kitchen floor and vomiting black shit everywhere. Suddenly, Jennifer is "evil...and not just high-school evil."

Revealing anything more about the plot would be a crime, because there is sly social satire lurking in the key to Jennifer's metamorphosis from high-school bitch to flesh-eating high-school bitch. However, as I sat in the darkened theater, yawning through at least half of its 102-minute runtime, I couldn't help but recall the better movies from which Diablo Cody draws inspiration -- Heathers chief among them -- or the spate of subversive teen horror films we've seen in the last couple of years. Horror fans would find more satisfaction in Let the Right One In, Deadgirl, Ginger Snaps, Teeth and All the Boys Love Mandy Lane (which, I might add, still hasn't seen a stateside release). 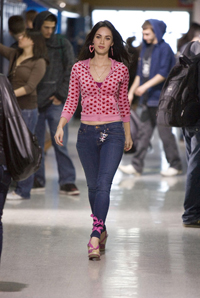 See, she's evil...and not just high school evil.Jennifer's Body is well-shot and well-acted, which is more than I can say for 99% of the teen horror films that get a theatrical release nowadays. Oddly enough, its problems are rooted in the screenplay. In Juno, Cody went a long way with parallel plotting, stylized dialogue, a keen sense of character depth and reversals of expectation -- qualities that secured her an Academy Award. True to form, the screenplay for Jennifer's Body contains all but one of these qualities, but Cody employs two of those strengths in all the wrong ways.

Let's start with the parallel plotting. While Juno contrasted the disintegration of one relationship with the beginning of another, Cody makes a fatal misstep early on in Jennifer's Body by playing her hand -- we sense there's something off about Anita from, oh, the third shot, which negates the shocking twist she was aiming for. Note to fledgling screenwriters: If you plan on writing a twist ending, make sure the reveal comes closer to the closing credits than the opening title card.

In Juno, the stylized dialogue was delivered by only two of the teenagers, both of whom were presumed by the audience to be uncommonly intelligent. In Jennifer's Body, every goddamn teenager speaks this way, leaving the audience frantically recalling references in their mental pop-culture index just to keep up with the dialogue. In my 26 years, I've read more than a few Rolling Stone issues, but to keep pace with these teenagers, I should have also read Wikipedia from A to Z, memorized URLs of political websites and checked tags in the Target cookware section. Their references are so scattershot, so cleverly paced and so uniformly delivered with that whatever Dad tone it becomes impossible to see these characters as teenagers, or as human at all. Here's a horror movie for you: Invasion of the Body Snatchers, except the aliens all speak like Cody characters and the last unenslaved teen has to destroy the invaders before she dies from the suffocating wittiness. Jennifer's Body is like the early conversation in Juno -- yes, that conversation -- stretched to a feature-length hell of infinitely recursive quirky dialogue.

OK, so that's two strikes and...wait, there's no real character depth outside of the two leads. The only reason to see Jennifer's Body is the subversion of expectations on display, which brings me to what I liked about this film and why Jennifer's Body deserves only the faintest, most guarded praise. If there's one thing Cody seems to understand better than any writer working in Hollywood since John Hughes moved to the mountains and stopped paying his phone bills, it's the pain and confusion of adolescence. While better horror films built on genre manipulation have hit multiplexes this year (Orphan and Drag Me to Hell come to mind), both were content to use their characters as cogs; while the dialogue the teenagers deliver in Jennifer's Body betray their existence as anything but screenplay constructs, Cody otherwise treats her characters as real people -- well, the two with starring roles anyway.

There's a certain pathos that occurs when Cody hints at a romantic component to Anita and Jennifer's friendship; for a few fleeting moments, it's like watching an American remake of Fucking Åmål. In addition, there are a couple of tender scenes in which Anita acknowledges the Jennifer she befriended is not the Jennifer who's chewing her way through half of the senior class -- and another tender scene in which she acknowledges the foundation of their friendship is, when laid bare, tragically lopsided. Furthermore, there's bitingly funny commentary in the trajectory of in-film band Low Shoulder's career, a surprisingly apt analogy for the consumerist reaction to 9/11, and a couple great set pieces.

Should you see Jennifer's Body at the theater? Probably not. Eight to ten dollars can buy a lot of things that will make you happier. But if you like thoughtful horror and if you've seen all of the other movies mentioned in the preceding paragraphs, Jennifer's Body is worth a rental. After all, if given the choice between this film or an endless number of teen horror flicks that are all style and no substance (or -- puke! -- the Twilight sequel), Jennifer's Body wins handily. At least Diablo Cody has a lot to say -- so much so, unfortunately, that it feels crammed into this film when it could have fueled 10-20 screenplays by lesser writers. 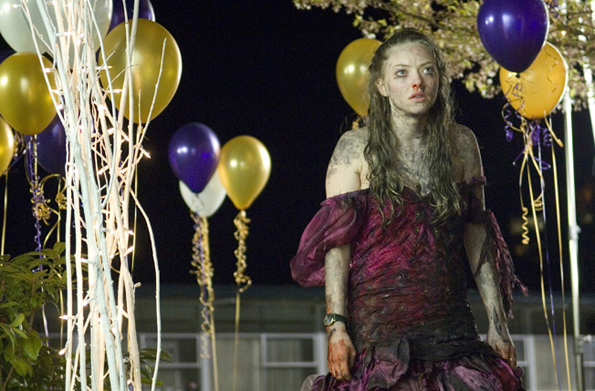 MINORITY REPORT: Misandry abounds when Cody's mouth is round

The horror in Jennifer's Body comes not from the easily predictable something-pops-out scenes. It comes not from the few shots of gore (one of which teaches us that deer do, according to the film, eat the flesh of humans, which I did not know until now). It comes not from the bizarrely placed, often slapstick violence. No, it comes from Diablo Cody's incessant need to inject the most annoying, pun-filled, pop-culture-referencing dialogue into every line of the script. I cringed, wrapping my hands around my stomach, crying out in pain as tragically hip lines including "Nice hardware, Ace" and "Why don't you just MoveOn.org?" were leveled left and right, usually followed by a smug smirk.

At least in Juno, this dialogue had its place among precocious hipsters, although it still made me want to rip my ears from my head. But having a character chortle "....my tit" when stabbed in the chest? Are you serious, Ms. Cody? Are you trying to sever any emotional attachment that the audience has to the scene, or is your year of trading sex as a commodity informing your dialogue more than your golden statue? I'd believe the latter, considering the plot of the film had more gaping holes than an Internet porn clip. Of course, when this writing thing fizzles out, she can always sell her Academy Award for extra cash. It's gold, you know! But considering her habit of reducing her male characters to self-serving idiots and her female characters to the sums of their sexual organs, she might have quite a future writing for Bang Bus.

This chauvinism, though, -- this is the worst sin Cody has committed, this unwavering and unabashed indictment of the male gender that permeates every sentence of her screenplays. I went into Jennifer's Body expecting what I received from Juno, the most repellent display of misandry ever to be given an award by the Academy of Motion Picture Arts and Sciences. I was not disappointed. Jennifer's Body continues Cody's tradition of inserting men -- I say men, but eunuchs would be a more appropriate term -- into roles in which they are utterly devoid of any real identifiable emotion beyond a drive for sex, and they are incapable of displaying even a modicum of common civility. Quite honestly, these are the most infuriatingly neutered male characters I have ever encountered in film.

The boyfriend is a tactless wimp, unable to overpower someone identified as being incredibly weak. The male victims are complete idiots, unable, in their simplicity, to elicit sympathy from the audience. I believe Cody wants the audience to derive enjoyment from these men being brutally murdered throughout the film. Why else would she intersperse her cringe-inducing puns throughout every scene, even when a supposed victim is nearing his death?

This is not some insightful commentary on the usual status of women as subjects of violence in horror films, a simple reversal of male filmmakers' misogyny. No, I believe it is something far more self-serving for Cody, who ventured into the sex industry as a tourist, seemingly oblivious to the reality of what it entailed: being the object of desire from a gaggle of rather undesirable and often inebriated men. Apparently this reality, this well-known truth, that being a stripper was not as sexy and glamorous as portrayed in cinema, shattered Cody's world. How dare they objectify her, a college-educated woman, completely nude, grinding her pelvis on their grease-stained work pants?

This self-loathing has left nothing but a bitter taste in her mouth for the other half of our species, and she uses her pen as a sword, preaching from the pulpit a sermon so full of man-hate it would embarrass even Andrea Dworking. After Juno, I hoped Cody would learn from her mistakes and attempt to write something worthwhile, but that potential remains unfulfilled. Now my only hope is that Hollywood wakes up from its awful nightmare, realizes the mistake it made in giving this woman an award that has only fueled and furthered her misandrist agenda, and runs her out of town so she can resume her rightful position as a provider of the lowest form of male entertainment.