An Awful Week in Movies is expanding! This week, the fine goons from Cinema Discusso review 9, Sorority Row, and I Can Do Bad All By Myself and provide a quick recap of what else is hitting multiplexes and video stores. 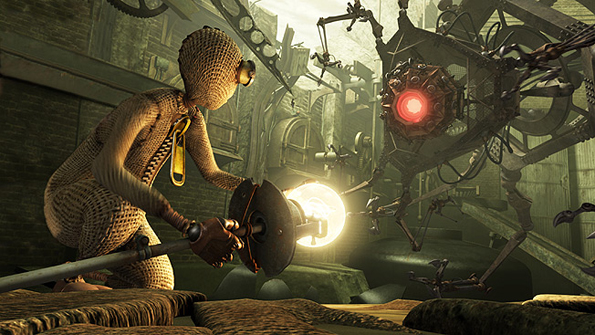 Note to self: When facing a giant robot, arm self with something more powerful than a shadeless lamp.

My Ragdoll is Fight!

The first time I walked into Hot Topic, I was a 15-year-old unique and special snowflake misunderstood by everyone but a major national retailer. I would have loved this movie had I seen it back then, down to plastering my DeviantArt page with fan art of the characters and signing over my McDonald's paychecks to anyone willing to sell me Tim Burton merchandise. Unfortunately, I saw it now, and other than the striking visuals, the film offers little but glistening turds of exposition, anemic dialogue and poor character development.

The movie begins with the patchwork protagonist 9 being handcrafted in the middle of a fucking war. He wakes up some time after his creation with a magical McGuffin, only to find himself in a steampunk wasteland. Our tiny hero quickly befriends 2, the lovable old guy, and 9 takes it upon himself to save 2. He's successful in his mission, only to then screw him over by awakening The Machine, a heavy-handed allegory for the evils of progress. From there on out, it's a nonstop post-apocalyptic battle for survival. Gee, I wonder who will win...

Every single action in the film operates via videogame logic, by which things happen only so the story can progress to the next level, not because actions are organic to the characters. The audience is told "this is important," or "this means something," as if a giant machine trying to kill everyone isn't obvious enough. This might work, you know, if this were a game that you can interact with on some level; however, in a movie it's downright insulting.

9 is just another all-too-common hero, the kind that fucks over everyone else and would rather slash his little burlap wrists than take someone's advice. He is such a videogame protagonist that, at one point, three of the characters square off against a spooky robot villain and -- I swear to God I expected a Final Fantasy battle menu to appear.

Elijah Wood voices 9, and what a fitting choice Wood is, as he has quite a history of playing creepy protagonists. From the first line he utters, I wanted to splash him with a 50/50 mix of hydrochloric acid and holy water. He starts off as a mute, and if he never talked at all, this movie would have been a billion times better, especially considering the animators are perfectly capable of making him non-verbally expressive.

What truly amazed me about the plot was that no matter what happens, nobody is ever truly angry at 9. Despite the fact that everything he touches turns to shit, they all just sigh and say,"What were you thinking?" with the tired exasperation of a single parent of sextuplets.

7, voiced by Jennifer Connelly, is introduced as the film's "spunky independent female," apparently because someone thought that having romantic tension in a movie about androgynous cloth robots wouldn't be creepy. Upon seeing her for the first time, 9 gives her a look that says, "I'd hit that if I had a cock" (no man-brows were given to 7 for realism, unfortunately) and for the entire movie they make doe eyes at each other in a way that only a taxidermist would find endearing. I'm convinced that 7 as a character is part of a Burton conspiracy to create a new fetish among awkward teenagers, and by the end of the month we'll have high-schoolers humping burlap out of sexual frustration.

John C. Reilly as 5 is interesting, in that 5 actually comes across as more human than Reilly himself. While he's obnoxiously chatty, I didn't hate him immediately. I was hoping Crispin Glover, the crown of creepers, would show that fucking hobbit what the truly bizarre really is, but he only gets three lines, which are repeated ad nauseum. The only characters I had any attachment to were 3 and 4, who, not coincidentally, were mute.

Visually, the film is stunning, but also very brown, so even the action sequences come across dull. That's a shame, because the design really is top-notch and Acker has a habit of decorating sets with his concept art. Seriously, it's everywhere, and I honestly wanted to give him a ticket for littering. That aside, the designs were just about the only fascinating aspect of this movie.

Despite all these mean words on the Internet, 9 is not by any stretch a horrible movie. It's safe, inert and pretty wholesome despite pandering to Gothopotami mallus. It's a decent debut for Acker, and hopefully not his last offering. If nothing else, I hope that the film will inspire other fledgling animators to put their ideas out there.

It still worked better as a silent short.