What could make an Easter weekend better than your choice of mediocre-to-bad movies? Nothing, that's what. Ian "ProfessorClumsy" Maddison went through the emotionless experience of seeing Clash of the Titans, while Joseph "Jay Dub" Wade went one worse and weathered the Miley Cyrus vehicle The Last Song. Poor bastard.

EXPECTATIONS: I'm a big fan of Ray Harryhausen. It was his work on films like Jason and the Argonauts and 1981's Clash of the Titans that sparked my fleeting interest in Greek mythology. I even had the great honour of attending a lecture by the man himself a few years ago. I just want you to know right off the bat that my feelings toward this remake are going to be biased toward the original and its stop-motion animation approach. This skepticism hasn't been helped by the film's marketing campaign promise that TITANS WILL CLASH! Will Titans clash? Let's find out.

REALITY: Titans don't clash. Granted, Titans never clashed in the original either. But, this film goes out of its way to explain exactly what Titans are in its opening scene. Later, it decides that Medusa and the Kraken can be Titans too, and it reasons that showing one monster the disembodied head of another counts as those two creatures clashing. Yeah, I just spoiled the entire film. You'll get over it. 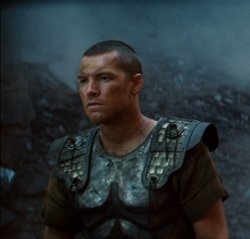 Sam Worthington, oozing charisma and personality.Clash of the Titans tells the story of Perseus (Sam Worthington), the illegitimate son of Zeus (Liam Neeson). He's raised as a man by his adoptive father Spyros (Pete Postlethwaite), but when Hades (a ham-tastic Ralph Fiennes) kills his mortal family, Perseus decides to get revenge by sulking a lot and constantly repeating the fact that he's "just a man" and that he can do anything as "just a man" because he has magical God powers. Anyway, for some reason there are some people on an island who actually declare war on the Gods of Olympus, only to have Hades threaten to release his beloved Kraken (Gerard Butler) on them for shits and giggles. The only hope is for Perseus to go on a quest with a team composed of manly men (including a dude made of wood) and an ageless, all-knowing woman to kill Medusa (Natalia Vodianova) and use her head to kill the Kraken.

Those names will all sound familiar to you, being that the figures of Greek mythology are so deeply ingrained into modern popular culture. I don't need to explain Medusa, Zeus or Hades because you probably learned about them in school. However, this film takes all of these fundamental stories and immediately recognizable characters and turns them into Star Trek. That may sound like an odd thing for me to say, but by the Gods, this film looks a hell of a lot like Star Trek. Olympus is realized in stunning lens-flare vision, with Zeus' armour shining in the most ridiculous way possible. He looks like one of those old limited edition, chrome-plated Rocklord figures. The world of humans has been reconstructed from Greek ruins by people who obviously didn't realize that ruins used to be buildings and weren't actually built that way. It's an honest mistake, I suppose.

Shiny Zeus is available for a limited time only. ROCKLORDS! POWERFUL LIVING ROCKS!

That's not to say the film is without its spectacle. On the contrary, there are a smattering of images that really bring home the power of artistry to overcome technology. The Kraken is so impressive they put it in the trailer: To hell with spoilers, people need to see that thing! In fact, I'd say that the entire Kraken sequence manages to outdo anything Avatar throws at you. It might not look as crisp and solid, but it does look like a work of art. It doesn't quite make up for a shoddy script, though, or the fact that the film is marred by a host of less impressive work elsewhere.

In one sequence, Perseus and the gang do battle with an unspecified amount of giant scorpions. I think there are at least three of them, fighting in different yet identical locations with actors who are all dressed the same. I had a hard time following what was going on and who exactly I was supposed to be cheering for when each scorpion dropped, not that I cared enough to cheer anyway.

I already complained about Sam Worthington being uninteresting when I reviewed Avatar, but now my mind is absolutely made up about him. As physically able as he may be, he just does not have the charisma to carry an action film. I'd take a Statham over a Worthington any day.

I was going to make some comment about Ralph Fiennes being the best thing in the film, but in this film that's not saying much.

There's also the problem of Perseus's band of expendable soldiers, which includes a tragically under-used Mads Mikkelsen and Liam Cunningham who, despite his obvious talent, just feels like a poor man's Bernard Hill. Throw into the mix Gemma Arterton as the all-knowing Io, who is kind of a love interest for Perseus as well as the character who explains every single plot element as needed, and you have a perfect storm of unengaging protagonists. Thank the Gods for the Gods, then. Neeson is as engaging and entertaining as ever, in spite of his super-shiny costume, and Ralph Fiennes steals the show as the husky-voiced, scheming Hades. When he's not on screen, you're just left wishing that he was. There's also Jason Flemyng as Calibos, a wonderfully villainous character who gives Perseus a run for his money in the physical stakes while acting him off the screen with ease. It's a shame that Flemyng, as one of the film's most entertaining actors and characters, just doesn't add anything to the overall story arc.

What really resonates in this story of manly men is a strange air of misogyny and a slightly confused morality. Perseus spends the entire film extolling the virtues of humanity and the power of mortal man, only to finally accept his super God powers when it suits him. Are you telling me I should accept who I am against all odds? Because if accepting who I was meant I got super God powers, I'd quite happily get behind that. But, I am a mortal man. You know what my powers are? I can watch a film and form an opinion on it, I've already accepted that. Thanks for the reminder of my disappointing life, you jerks! 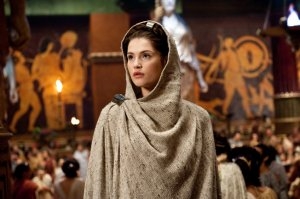 Oh no! It's a woman!All this talk of mortals and humanity is actually slightly misleading on my part. What the film talks of is MEN. Manly men with manly man feelings doing a manly man's job. A manly man's job is to fight and die for honour and glory and ultimate victory against impossible odds, whereas a woman's job is to know her place and be a thing for a man to possess like a shiny suit of armour. And you'd better stay eternally beautiful or you're obviously an evil hag. I'm not making this up; I think the writer must have just come through a rough break-up or something. All of this is re-enforced in Titans' final scene, when Perseus accepts Zeus as a father figure and has the ageless, all-knowing love interest literally given to him as a gift. I know I'm spoiling the hell out of this film, but that needed to be said.

As for the wooden man who wears a turban, has strange religious beliefs, speaks in an unfamiliar language, is not trusted by the "normal" folk and finally turns out to be a suicide bomber... I'm not even touching that one.