EXPECTATIONS: I hadn't heard anything about this movie until the middle of this week and know embarrassingly little about James Brown other than the classics. But I've been trying to get my bad self into some more retro funk, so maybe this will be a good tutorial on where to begin.

REALITY: For the price of a movie ticket, you could buy James Brown: 20 All Time Greatest Hits! and listen to it while scrolling through his entry in Wikipedia. You'd get pretty much the same experience of seeing Get On Up, and you wouldn't have to sit through yet another trailer of Liam Neeson punching people. James Brown (Chadwick Boseman, in flashbacks by Jordan Scott) rises up from extreme poverty and parental abandonment to become the Godfather of Soul. Along the way, he fights with his best friend and bandmate Bobby Byrd (Nelsan Ellis) and teaches his white Jewish manager, Ben Bart (Dan Aykroyd) to like fried catfish. There is plenty of lip-synching and sweat, with the occasional "gee whiz" historical momentum thrown in. Ha ha, those Rolling Stones, no one will remember them! (This is EXTRA ironic, of course, because Mick Jagger produced this film. Except that isn't ironic, it's silly.) 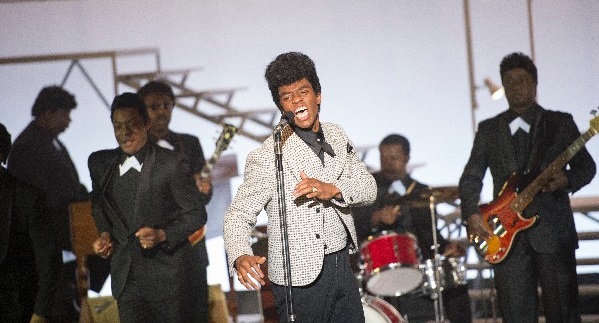 If it sounds like I'm dismissing James Brown's contribution to music, it's because the movie did it first. It was very much a movie about black people designed exclusively for the consumption of white people who like to get funk-eh. There's even a scene where a snotty white couple at the hotel, after complaining about having to share the pool with "a bunch of ENTERTAINERS" (the husband quickly covers for his wife saying the n-word) are twerking like a bunch of drunk teenagers as the band rehearses upstairs. It's supposed to show that Brown's music crossed racial boundaries, but it just comes across as patronizing to everyone involved. "Oh, thank goodness, white people like this music too!" says Get On Up, wiping sweat off its brow with a linen handkerchief.

Boseman's spot-on James Brown is at his best when he's going completely off the chain, such as in the opening scene, where he waves a shotgun and demands to know who used his bathroom. It's exciting and it's bizarre and it sells Brown as an interesting - if unreliable and terrifying - figure. The rest of the movie glosses over the ugly parts of Brown's life; he hits his wife in one scene because audiences expect him to - that's part of the genius' tragedy. But he only hits her once and then looks really sad after he does it, because any more and the audience's delicate palate might get upset. 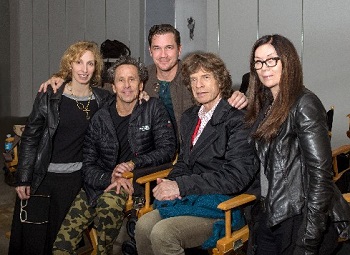 The crew meets an old person who was actually there!

That's not to say Get On Up owed its audience an ugly portrayal of a legendary figure. But it does owe us an honest one, including how he met Byrd. In the film, they meet when Byrd's Gospel Starlighters group is performing in the juvi hall where Brown is doing time for stealing a three-piece suit. In reality, they met when the juvi's baseball team was playing against Byrd's team, and had already changed their name to the Famous Flames when Brown asked for a spot as the drummer. It may seem like a minor detail, but this is the spark the majority of the film burns its fire from. It wouldn't have changed any of the film if they'd just shown it how it happened instead of making something up.

Then there's the way the movie is structured. It's weird and it's uneven, often switching between youth and adulthood within the same scene, and it occasionally breaks the fourth wall, where Brown will address the audience directly about how he feels about how awesome he is. On one hand, it's a neat technique, because Brown is a little bit crazy, but it's also distracting and oddly paced. The film will go several scenes without it, and then all of the sudden, his childhood self is talking to you directly, then everyone in the world is chanting his name, then he's screaming into the microphone. It seems like it's supposed to be artistic and dramatic, but instead, it's jarring and unsettling.

Get on Up is not a bad movie. It's just a dull one, hardly even worth the moniker Oscar-bait. Scene after scene ambles on with no regard for pacing, and with a whole life to cover, no one period in his life gets any due diligence. Brown's complicated legacy is glossed over, but that doesn't do anyone any favors. Get On Up is a film that doesn't trust its audience and instead of introducing new audiences to Brown's work, merely serves as yet-another baby-boomer nostalgia trip, only this time, they invited their "black friends" along for the ride.

MINORITY REPORT: I take it Get On Up never bothers to re-enact the James Brown scene from Rocky IV. I wondered who they would get to play young Dolph Lundgren, but oh well. I guess there's always Expendables III. - Joseph "Jay Dub" Wade