It's utter chaos this week at the Current Releases office. The Purge: Anarchy has somehow infected all of the other films! Crime is everywhere! Suburban parents and street musicians are running amok! It's madness! First up this week, Sean "Keanu Grieves" Hanson gets to the heart of The Purge: Anarchy and explains this week's insanity. Next, guest reviewer Libby "Gentleman Loser" Cudmore" finds out that breaking and entering to steal a Sex Tape is also legal on Purge Night. Finally, Joseph "Jay Dub" Wade gets an inside look at how The Purge allows the musicians of Begin Again to record music in public without a permit. Yes sir, just look at all the great things The Purge does for us.

EXPECTATIONS: The Purge was half of a good movie, told from the wrong side of the socioeconomic divide. As other critics have noted, it's a ridiculous premise built to explore class warfare, so why did we spend an entire film in the company of rich people protecting a homeless veteran from other, less-noble rich people? The trailer for The Purge: Anarchy shows us people stuck out on the streets - although, from the looks of it, they look like they're leaning closer to mild affluence than abject poverty.

REALITY: As a struggling critic, I frequently wonder if what I do matters, if there's a place for us in a world where apathy towards critical opinion, midnight releases, and a declining number of press screenings short-circuit any chance that a guy like me could have any effect on the cinematic landscape or build a viable career out of opining about movies when they're gradually becoming critic-proof. In that sense, The Purge: Anarchy gives me the warm and fuzzies. I didn't review The Purge last year, and Ian took a different path towards assigning The Purge a paltry 15/50, but other critics did call out the film for its perspective error. Writer/director James DeMonaco clearly took that criticism to heart when he set out to make Anarchy, which might as well have been titled The Purge 1.1, and it's hard to recommend against any movie that shows significant progress, even when it's still weighed down by some fundamental flaws. 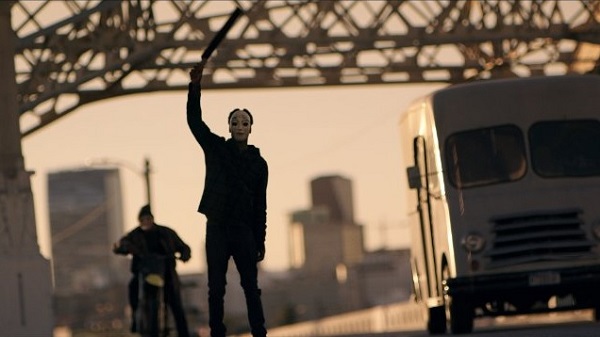 "Hey! You left your machete! Want me to bring it to you?"

The trailer emphasized two of the three interlocking stories: In the year 2023, Liz (Kiele Sanchez) and Shane (Zach Gilford) get stuck on a bridge shortly before the commencement of the annual purge, in which all crime is legal for a twelve-hour span, while Sergeant No-Name (Frank Grillo) gears up to take to the streets as some kind of protector or avenger. What the trailer neglects to mention is that the third major plot strikes closer to the heart of how poor people might fare in such conditions. Eva Sanchez (Carmen Ejogo) is a waitress, working to provide for her daughter Cali (Zoë Soul) and her dying father (John Beasley), and her boss thoughtlessly keeps her at work, with no customers to tend to, even as commencement is imminent. She makes it home in time - barely - but, as they are unable to defend their apartment against intruders, she too finds herself out on the street. Eventually, our five protagonists find themselves united by circumstance and defending themselves against roving gangs and paramilitary teams that are armed to the teeth. 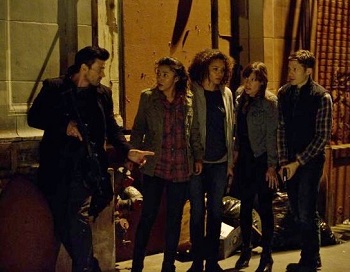 God, levels with escort missions are the worst.As such, Anarchy is less of a horror film and more of an action film reminiscent of The Warriors or Escape from New York, what with its near-futurism, large-scale urban action set pieces and liberal paranoia. Sure enough, DeMonaco says he was influenced by both of those films. But they differ in degrees of humor and camp. The Warriors needed time to become a cult classic, mostly due to its woefully theatrical depiction of gangs, and Escape from New York's hero wore an eye-patch and spat misanthropic one-liners. Time may prove me wrong, but Anarchy is neither campy (despite its appreciably absurd premise, which could be hilarious by 2024) nor particularly witty, and Sergeant is no Snake Plissken. Instead, true to a depressing trend among recent horror films, Anarchy takes itself way too seriously. That the U.S. would implode and rebuild itself with new founding fathers who would sanction crime for twelve hours per year is a premise that requires an acidic undercurrent of satire to work. Aside from a third act tinged with dark comedy that may or may not be intentional, Anarchy is stone-faced. I watched it yesterday. Today, I can't remember a single line of dialogue.

But I do remember the situations in which these characters find themselves and how well they speak to the ideology of the film, which is refreshingly liberal for a movie that straddles the line between horror and action, two genres known for critiquing social structures before ultimately reinforcing conservative values. The Warriors despairs of urban violence and Escape from New York emphasizes the effect one wise-talkin' anti-authoritarian can have on a lawless state. Meanwhile, Anarchy emphasizes the value of teamwork and cooperation, uses its premise to critique the U.S. circa 2014, and even includes an unsubtle critique of the Creepy Nice Guy: a neighborhood dude offers Eva and Cali protection, Eva politely declines & and guess who bursts into her apartment with a shotgun, ready to rape them both because Eva didn't politely spread her legs in the face of his overwhelming generosity? That the rape does not follow proves that DeMonaco is capable of restraint, even if he beats us over the head with meaning elsewhere, and that he knows cinema doesn't need another rape scene in films primarily crafted to entertain. You see, even when Anarchy isn't great, it's at least refreshing.

MINORITY REPORT: I'm honestly more willing to buy a ticket to this Purge film if it means DeMonaco gets to do another and keep learning from his mistakes. Let this end with three, though. The last thing we need is someone remaking the same film his entire life in a Sisyphean struggle to get things right. - Joseph "Jay Dub" Wade