The Lego Movie; The Monuments Men; Best Night Ever

According to reports, Ian "Professor Clumsy" Maddison has been captured by pirates. They say they will not release him until he stops talking about how every film is full of boners. That may be a while, so Joseph "Jay Dub" Wade will be taking over in the meantime. But have no fear, Martin R. "Vargo" Schneider is here to tell you all the awesome things about The Lego Movie, Joe inspects The Monuments Men and Sean "Keanu Grieves" Hanson has the Best Night Ever. Yes, things are still moving like clockwork around the Current Releases office.

EXPECTATIONS: I know that you may think there's not much to get excited for in a movie about plastic interlocking building bricks which are just irrationally painful when stepped on. However, this one comes with a high pedigree. Phil Lord and Chris Miller are basically masters of making films that come out much better than the basic concept suggests they have any right to be. They're two of the best comedy directors out there, period. There's no reason to think that this film won't be as good as 21 Jump Street or Cloudy With a Chance of Meatballs, a film I can talk about for hours - and have. When you combine an intellectual property driven by imagination with two of the most imaginative guys in the industry, then yeah, I'd say that's something to look forward to.

REALITY: Throughout The Lego Movie, an insanely catchy Tegan and Sara tune pops up to remind us that "EVERYTHING IS AWESOME." It's first introduced to make fun of manufactured, cookie-cutter pop tunes, but as the film goes on, it morphs into something of an anthem. Lord/Miller have once again created a comedy that is worthy of close reading and analysis, but also have politely chosen to remind you that you are in the middle of a movie wherein Batman teams up with a Robot Pirate to sneak into a building full of Laser Sharks, and y'know what? That's pretty friggin' awesome.

The Lego Movie follows Emmett (Chris Pratt), our Everyman hero, here represented as a plain construction worker Minifig, the kind you had dozens of in your bucket as a child. When Emmett falls into an underground pit, he finds the renowned Piece of Resistance which the prophecy of the wizard Vetruvius (Morgan Freeman) says will be used by The Special in order to stop the evil Lord Business (Will Ferrell) from use his doomsday device to freeze everything in the Lego universe into perfection. After being dragged into the underground resistance by WyldStyle (Elizabeth Banks), Emmet has to figure out a way to lead the Master Builders against Lord Business, including 1980's Space Guy (Charlie Day), Batman (Will Arnett) and, of course, a cute little unicorn kitty (Allison Brie). At this point, I'd like to point out that those run-on sentences are the most fun I've ever had writing a plot description. What is an incredibly standard plotline is still taken to absolutely amazing levels of silliness.

This is basically an overarching theme in the film, that there is so much creative potential in the world, but the inspiration for creativity has to come from somewhere. This is appropriate, considering that the entire purpose of Lego toys is to give people the ability to power their imaginations using pre-established sets and pieces. (As long as their imaginations don't require rounded edges.) As a result, we have a movie without a shred of cynicism, which refuses to look down on anyone. If The Incredibles tells us "If everyone is special, then no one is," then The Lego Movie tells us "Everyone IS special, and that rocks!" but is clever and creative enough to do it without pandering. 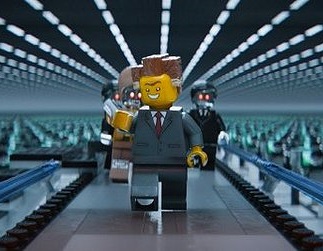 Obeying and Consuming: Awesome!Of course, none of this would work if the film weren't brilliant on the most technical levels. The computer-animated Lego world is expansive and inspiring, and the vivid art direction makes the best use of the source material (ha!) possible. Everything in this film is made of CGI Lego, and anyone who has ever been a child will realize what pieces are being utilized in the most original ways possible. The script is also smart and funny, since Lord and Miller have this remarkable ability to constantly toss out gags at a madcap pace and have them all hit. The constant frenetic pacing may be offputting to some, and it does lead to "action" sequences which go too quickly to be fully comprehensible. However, near the climax of the film, the movie slows down long enough to explain itself, re-assessing everything we've seen up until that point. The result is simple and touching, and it propels a good film into greatness.

The Lego Movie is one of those rare films which works on any level you wish to analyze it. Taken at face value, it's fun, exciting, and hilarious. Diving a little deeper, it's a 90-minute toy commercial which also simultaneously decries and celebrates capitalism and consumerism, and somehow makes it work. Hell, the bad guy is named "President Business" and during his monologue, he mentions that he never got a trophy just for showing up. It's an assessment of families, a denouement of hipsterdom, a platform for all sides of the "how to properly play with Lego" argument, and a reminder of how stupid it is that people have that argument. It's a movie for people who call them "LEGOs" and people that insist they're "LEGO-brand building blocks." Mostly though, it's just a solid moviegoing experience that did its job of entertaining me and making me want to buy a Lego set, until I remembered that I really, really suck at those things.

MINORITY REPORT: Damn, I could've sworn this movie was about preparations for the Winter Olympics. -Sean "Keanu Grieves" Hanson