This week there are two movies of the week! By that I mean this week has two movies that are of it. It was either that or make them fight in a tie-break scenario. To get the ball rolling, we have Joseph "Jay Dub" Wade jumping back in time with Lawless, then Ian "Professor Clumsy" Maddison gets depressed over fictional divorce in The Possession; Sean "Keanu Grieves" Hanson delves into his obsolete movie collection with V/H/S; and, finally, Martin R. "Vargo" Schneider struggles to wrap his noodle around Cosmopolis.

EXPECTATIONS: John Hillcoat nailed period-piece films like The Proposition and The Road (hey, post-apocalypse counts as a period), so I'm looking forward to seeing what his version of a Prohibition-era gangster film looks like. I'm at least hoping for something a little more cinematic than Michael Mann's digital wet fart Public Enemies.

REALITY: Sometimes, even a decent film can leave you feeling disappointed. I saw Lawless on Friday afternoon and was thoroughly entertained. I sat down Friday night to write this review, only to discover that my interest in it had dropped off almost completely. By Saturday morning, I was struggling to remember anything about the film at all. My notes, my ticket stub and my memories of Shia LaBeouf's terrible Southern accent are all that remain of Lawless, which is a damn shame. It's a great cinematic experience in the moment, but evaporates almost instantly.

It's 1931, the tail-end of the Prohibition era, and the bootleggers of Franklin County, Virginia are having one hell of a time. The Bondurant brothers make their living running moonshine out of their family restaurant, and the local sheriff is willing to look the other way so long as he gets a jar or two. The youngest brother, Jack (Shia LaBeouf), wants in on the family racket, but his brothers Forrest (Tom Hardy) and Howard (Jason Clarke) think he's too weak for the job. So Jack starts selling his own moonshine to local gangster Floyd Banner (Gary Oldman), which only causes trouble for the Bondurants. On top of that, a government agent named Rakes (Guy Pearce) arrives in town to shake down the bootleggers, threatening to ignite a war between the feds and the Bondurants. 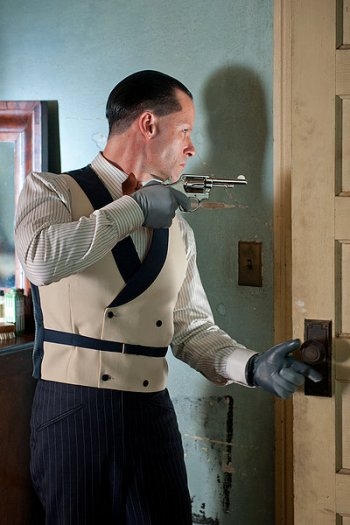 That's just silly.For as many characters as the film has, Lawless is surprisingly light on actual story. Between the feds, the gangsters, the Bondurants, their mysterious new waitress (Jessica Chastain), and a local girl Jack tries to court (Mia Wasikowska), the film takes half a dozen tangents, but always comes back to the central plot of "Jack tries to help his brothers sell moonshine." But while Jack is the heart of the film, his part in the story rings hollow. Shia LaBeouf takes pratfalls and gets jabbed in the face with a shotgun like a trooper, but he's written as the stock 'young pup' character we've seen too many times before. He's our viewpoint character, the one through whom we experience this world, but he's only as interesting as the characters he's playing against.

Fortunately, those characters are remarkably well-drawn. As Jack's older brother, Tom Hardy brings the sort of quiet intensity to Forrest that's quickly becoming Hardy's trademark. He's a man of few words, but those few words are filled with gravelly, hard-nosed wisdom; the kind of wisdom that says "I'm taking the less is more approach because, unlike Shia, I know damn well I can't do a Southern accent." Hardy is able to communicate more in one angry stare-down than most actors can manage with an entire monologue.

The other standout performance in Lawless belongs to Guy Pearce. Pearce doesn't stop at playing Special Agent Charlie Rakes as a city boy; he pushes the character full-tilt crazy by playing him as a germophobic sexual deviant. With completely shaved eyebrows and an oddly precise haircut, Pearce is ten times slimier than his character in Prometheus, and infinitely more disturbing. Eliot Ness wouldn't want to work with this guy; he is literally Untouchable. If anything, Rakes is almost too outlandish for a film like this. For a film that nails the backwoods setting and tone, he sticks out like a sore thumb (though much of that is almost certainly intentional).

Speaking of setting, I would argue the setting is this film's greatest strength. Director John Hillcoat and his crew do a marvelous job of recreating Depression-era Virginia, right down to the the streets of backwoods Franklin County. Every location looks like it was just hit by a dust storm (despite the fact that Lawless takes place in the mountains); the entire film's color palette consists of a dozen or so shades of brown and grey. This feels like the sort of film that might have been going on in the background of O Brother Where Art Thou while George Clooney was farting around.

Coupled with an equally impressive soundtrack by screenwriter Nick Cave and fellow Bad Seed Warren Ellis, Lawless's setting makes for a thoroughly engrossing viewing experience. Sadly, it's an experience that can't last forever. There is little in Lawless worth holding onto, save for a sepia-toned aesthetic and some well-drawn characters. The final showdown between the bootleggers and the feds seems as though it's going to build to a much bigger crescendo than the one we eventually get, and certain characters ultimately serve no real purpose. There are hints of Bonnie and Clyde in Jack's journey to becoming a big-time bootlegger, and it's that journey we should have been more privy to, but all of it collapses in the wake of Agent Rakes, a cartoonishly villainous character practically begging for his own spin-off.

MINORITY REPORT: Shia LaBeouf is such an oddity of an actor: He's not even that bad, but he acts like a total douche in his personal life to make up for the fact that he automatically makes any film he's in seem like Mrs. Harris' fourth-grade history play. - Martin R. "Vargo" Schneider