EXPECTATIONS: I'm a Jason Statham fan, no point pretending I'm not. I think action films are perfect time capsules, and that Jason Statham is what our generation decided to seal up and bury so future generations would think we were all like him. This particular Statham vehicle is based on a book by Sir Ranulph Fiennes and features Clive Owen and Robert De Niro, so it has a pretty meaty pedigree to back it up, which bodes very well indeed. 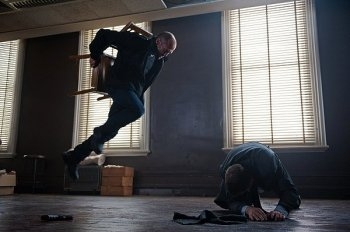 You'll be happy to know that this is exactly what it looks like.REALITY: Killer Elite is, quite simply, the best action film since Fast Five. Its twisty, suspense-driven plot isn't always effective, but there's a relentlessness to it that keeps you excited right until the end. All of its flaws can be forgiven because this is like an alternative version of Tinker Tailor Soldier Spy, where instead of finding out who the mole is, they just kill all the suspects and everyone else.

The year is 1980 and former assassin Danny (Jason Statham) is brought out of retirement when his erstwhile partner and mentor Hunter (Robert De Niro) is kidnapped by a vengeful Sheik in Oman. Confronting the sheik, Danny is given a job to do: return to London and kill the S.A.S. operatives who assassinated his three sons. When he's reunited with his team (Dominic Purcell and Aden Young), it doesn't take long before the killings garner the attention of the secret society of former S.A.S. officers known as The Feathermen, and their tenacious field operative Spike (Clive Owen), who is intent on tracking down the culprits at all costs.

Killer Elite gets it absolutely right, with some set pieces that I suspect will become unforgettable classics. Any time Statham and Owen appear in the same scene, you just know something amazing is about to happen. An early encounter between the pair in an operating room is, simply put, the best onscreen fight I have seen since... I don't even know when. What makes the dynamic between the two leads interesting is that neither is more heroic or villainous than the other; they are simply two professionals with conflicting interests.

Corridor shoot-outs are the staple of the action thriller genre.

The cast is generally very good. De Niro is in top form, clearly relishing the chance to play an entertaining character again (it's been a while). The real surprise here is Australian actor Dominic Purcell, best known for Prison Break. His English accent is a little muddy, but he is just so joyously watchable as a slimy and mostly ineffective sidekick rocking a hilariously greasy mustache and a generally unpleasant, yet somehow likable, demeanour. And then, of course, there are the always entertaining and intense leads, not afraid to play up their similarities where they can in an effort to maintain an on-screen relationship even when they are not sharing scenes. 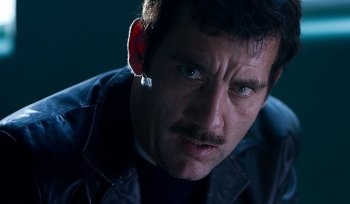 Did you just make fun of my mustache?A mixture of brute force, resourcefulness and quick thinking, these two men never miss an opportunity to turn a situation to their advantage. Even thought the plot trundles along through familiar and predictable territory, it's these huge moments of watching the characters just go for something when they have the chance that bring surprises. You know when you watch an action film and wonder why they didn't try and do something another way? Killer Elite has a lot of fun with that idea.

Even though Killer Elite is set within the real world of 1980, the modernity of the visual style helps to reinforce the idea that this is all fun and games and should only be taken just seriously enough to care. However, this all becomes a little problematic as we come into the third act. Just when Danny thinks he is done, he gets a new target: Ranulph Fiennes. Well, real life has spoiled the outcome of that scenario -- Sir Ranulph is very much alive to this day -- but that doesn't stop them trying to milk as much suspense out of it as they can. Unfortunately it falls a little flat, but does lead to one of the best scenes in the film. From then on, you'll pretty much be waiting for the film to end, as it kind of runs out of steam once the main conflict is resolved. The sad part about the rival leads not being true enemies is that once the bad guy is out of the way, their problem remains to be solved, and it just juts out at the sides like an uneven shelf. It doesn't so much end as it just... peters out. Don't let that put you off, though, this is still a film in which Jason Statham uses a corn cob as a silencer.

MINORITY REPORT: See, the difference between this and a movie like Abduction is that people expect these guys to do more than just be young and muscular. Maybe in 30 years Taylor Lautner will get his chance to beat people up while tied to a chair (assuming this doesn't already happen at Twilight conventions). - Joseph "Jay Dub" Wade