That Sonic the Hedgehog movie trailer was released yesterday, which means literally every person on Earth has made fun of it by now. I won't rehash any of that.

What I will do is tell you the film's real problem: It's not Speed Racer.

Earth is dumb as hell. Normal people are terrible things. Get them out of here! Sonic should be zipping through a twirling confusion of color-barf landscapes while hyper-unreal characters slide into the frame and shout interjections.

Okay, you would need to make a few minor changes. Replace the words Speed Racer in the title with Sonic the Hedgehog. Digitally remove Emile Hirsch and the Mach 5. Replace them with Sonic, which is a five second loop of Christina Ricci jogging in place in a blue hoodie.

Valve's new virtual reality headset is called the Index. It's slightly nicer than the competition, and if you want one with the controllers + base stations it will cost $999. 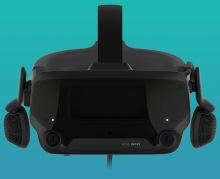 That's three hundred and ninety nine dollars more than I'd be willing to pay for any VR setup!

That's a hundred dollar bill for every worthwhile and substantial VR game that exists! And that's being generous!

Hopefully this is a premium package test run to pave the way for a cheaper product down the line. As optimistic as I am about virtual reality, it's a little weird that I still don't own a headset.

And lol at the idea of ever buying an Oculus product.

It's been a while since our last board game feature, hasn't it? My Warhammer painting process is still in the "deciding which color paints to buy" phase, so that's obviously going super well. And after a while all those standalone themed board games were starting to blur together. Yes, the miniatures in Fantasy Flight's $80 The Slap board game are nice, but is it really that different from Fantasy Flight's $80 Police Academy board game?

That's why I just picked up Carcassonne. It's my first European-style board game. It was on sale. And never in my life have I passed up a free river + abbot combination.

After playing precisely one game: It's good! I made a very long road and got confused by a farm! I might play a bit more and do a new installment of Board Game Article! I will never stop using exclamation points!

Steamworld Quest!
The Steamworld series is easily the most creative and consistently great brand in games, followed closely by Divinity! 9/10

Days Gone!
It's like several popular games but not as interesting or satisfying as any of them but not completely terrible! 6/10

Mortal Kombat 11!
The people in charge of NetherRealm are pieces of shit who treat their workers poorly (a lot of that going on, imagine that!) so please imagine a Mortal Kombat screenshot with the word UNIONALITY in a cool bloody font! 6/10