Like many people my age, I grew up on a healthy diet of movies and video games. My childhood coincided with the Nintendo Entertainment System bringing video games out of the 1983 video game crash and eventually into a $66 billion industry. With gamers on average in their thirties, millions of us undoubtedly have spent hours upon hours pushing buttons and sweating over a plastic controller so as to manipulate our primitive sprites into ramming into the CPU's primitive sprites for bragging rights, shaping our worldviews in ways we probably can't even fully articulate.

Well, my generation has grown up, and quite a few of them have brought these experiences to Hollywood. 2010 gave us Scott Pilgrim vs. the World, a gamer panegyric that exudes video games from start to finish. Josh Trank, who directed Chronicle, mentioned video games as an influence as well. Shane Carruth cites Portal and Grand Theft Auto IV as artistic influences.


But even directors who don't play video games still find themselves influenced by video game culture. Your average big-budget video game has cutscenes blocked and shot much like a film. Your average big-budget film relies on computer graphics for its aesthetic almost as much as any video game. As the processes come together, it only makes sense that the two storytelling forms would start to come together artistically. As Americans consume more and more video games and movies, cultural expectations of what constitutes a "good movie" shift as well.

Peter Debruge of Variety posits that video game influences manifest in heavy first-person camera usage and storytelling through "levels" rather than acts. Oversimplified as it sounds, Debruge has a point. The first-person camera can yield the heightened emotions and aleatory feelings that typify video games. The found footage genre as a whole plays well off this idea, as we see in V/H/S and V/H/S/2, two anthology films where one feels right there in the protagonists' shoes.

Indeed, I find that, in general, found footage comes closer than any other genre to making the viewer "feel" a sense of interaction with the film. These films seem to induce us to think instinctively about how we'd react in a life-or-death situation in which we don't necessarily know all the facts. In Cloverfield, the narrator practically forces us to see the situation through his eyes. When we watch the film, we don't know what we see or where to go; we only know to run. The better segments of both V/H/S films treat the viewer similarly. When we view the story through a character's eyes, we almost feel our blood pressure rising and falling with theirs. We find ourselves instinctively asking, "What would I do?"... or for an especially persuasive film, "What do I do?" 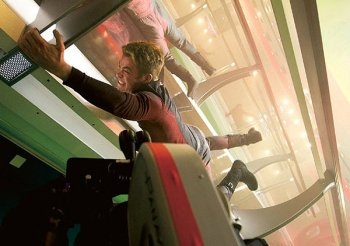 Ugh, I'm stuck on the shifting gravity level in Star Trek Into Darkness.Debruge's definition of "levels" seems to presuppose a storytelling mode wherein the protagonist defeats a series of antagonists in sequence culminating in a "final battle." (Scott Pilgrim probably serves as the ideal example.) We do see this in Now You See Me, where the protagonists perform three escalating performances, but these performances line up with a typical three-act structure. The Purge features a series of antagonists in its own right: a rash boyfriend, a gang of patrician bullies, and several unexpected others.

I see "levels" more as several variegated locations. Marc Forster designed 2008's Quantum of Solace so each fight would evoke a different "element": earth; wind; fire; water. The Thor movies give us a garish Valhalla with a plenitude of settings and virtually every color we can imagine. Pain & Gain and Spring Breakers each run with Michael Mann's famous Florida cinematography. Bay and Korine use their respective styles to shoot everything from dingy, gray hideouts to parties bursting with secondary colors. In Star Trek: Into Darkness, Abrams takes us from the crimson forests of Nibiru to the sterile Enterprise bridge to the drab wastelands of Qo'noS.

But "levels" don't always manifest as antagonists or places. Most of the Metal Gear games, for instance, have a protagonist explore one place in great depth. The last two Universal Soldier movies-both directed by John Hyams-feel nearly identical to Metal Gear games: the protagonist sneaks into a large, hostile compound and furtively kills his way to saving the day. Here, the "levels" manifest as shifting objectives within the story. With each sequence our hero has a different goal, something he needs to do right then.

This idea of "levels" speaks in general to the main selling point of video games: we want things to change based on our decisions. We want more plot twists, more action, more of the unexpected, more change. Oblivion and Gravity exemplify this. Objectives shift and characters suddenly enter or exit the story with a force that changes everything every few minutes.

One can also see this by looking at average shot length. We viewers of 2013 have grown used to an ever-shifting viewpoint and near-constant change of angle. Star Trek: Into Darkness had an average shot length of 3.5 seconds; its spiritual antecedent, Star Trek II: The Wrath of Khan, had an average of 6.6 seconds. Baz Luhrmann's hyper-kinetic style boasts shot changes at breakneck speed. his adaptation of The Great Gatsby has shots lasting 2.3 seconds on average. Its predecessor from 1974? 10.5 seconds.

Of course, since the days of Night Trap, video games have come under fire for containing things firing... and exploding, stabbing and bleeding. 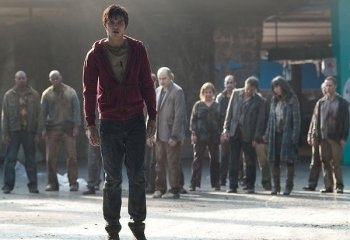 Yes, I just beat the falling in love level in Warm Bodies.Personally, I strongly doubt video game violence causes violence in film-especially considering Americans my age and younger have spent most of our cognizant years in the shadow of real-life war-but 2013 has certainly given us our share of hyper-stylized violence. Spring Breakers almost feels like it wants the viewer to buy a balaclava and cruise beaches with a shotgun. This is the End takes violent humor to a bloody and hilarious extreme. Warm Bodies takes zombie violence-a long-running video game staple-and attempts to find romance therein. The Purge features antagonists who view killing people as a video game.

With this said, 2013 in film also marks a sort of enervation. Upstream Color's violence usually comes with great reluctance. The Place Beyond the Pines and Insidious: Chapter 2 give us characters who feel trapped in a cycle that precipitates violence. We've lived a long time in the shadow of violence; we've started to feel the toll it takes.

To understand how video games influence movies, we should ask ourselves why we play games. I believe gamers receive stimulation from feeling in control of a situation... but that control only appeals when they feel a lack of predictability. Connect Four, Master Mind, and Tic-Tac-Toe become boring if you know their mathematical solutions. Games seem exciting and fresh to us when we sense infinite possibilities.

Truly, I think this exemplifies the main influence of video games on film. Viewers want that unpredictability. Video games give us a craving to feel surprised, to feel like we don't know what will happen next.

Perhaps that should serve as our rallying cry for 2014: let us not know what to expect.