The Hobbit: The Desolation of Smaug; Saving Mr. Banks; Blue is the Warmest Color

You should probably go out to the cinema this weekend, we've got three films here that range from pretty good to excellent. We start with the one you're all waiting for: The Hobbit: The Desolation of Smaug, which Joseph "Jay Dub" Wade reckons is much better than the first one. Then, Saving Mr. Banks leaves Ian "Professor Clumsy" Maddison weeping and confused. Finally, Sean "Keanu Grieves" Hanson contorts his body into all manner of sexy shapes to express his love for Blue is the Warmest Color.

The Hobbit: The Desolation of Smaug

EXPECTATIONS: Oh boy, it's the Hobbit movie everyone's been waiting for, in which we finally meet the dragon Smaug, voiced by Benedict Cumber -- wait a minute. Wait just a dwarf-humping, hobbit-snuffing minute here. Ian, you sneaky devil. You sent me to a movie with a talking animal in it. If I didn't know any better, I'd think that was your plan all along. You're not a clumsy professor at all. You're a monster.

REALITY: Finally, these movies are about something again! (SUBTEXT ALERT) While The Hobbit: An Unexpected Journey was entertaining enough as adventure romps go, the only things holding it together were a likeable cast and the movie's steadfast insistence that we'd get to the good stuff eventually. Well, not only does The Desolation of Smaug finally get to that proverbial good stuff, but it turns out to be damned interesting stuff to boot.

Luke Evans really is doing his best to appear in everything possible just lately.


When last we left our heroes, the dwarves had escaped Goblin Town and our titular hobbit had found a neat little ring in Gollum's cave. Bilbo (Martin Freeman) and friends are still on the run from Azog the Defiler, and they encounter all manner of people on their way to the Lonely Mountain. In Mirkwood forest, they escape a pack of giant spiders only to be captured by wood elves, among them Legolas (Orlando Bloom) and Tauriel (Evangeline Lilly). Their journey then takes them to Laketown, where Bard the Bowman (Luke Evans) offers shelter as they prepare to enter the nearby mountain.

This time around, the series recovers the narrative footing established in The Two Towers. Sure, it still suffers a bit from being the second act in a larger story, but is this a problem that actually bothers people? It seems like a strange complaint to make about the fifth film in a pair of trilogies. Aside from juggling too many plots at once, this film flows much more smoothly than the previous one. (Mostly because the endgame is finally in sight.) I will confess, I had absolutely no idea how they were going to tell the rest of this story across two films, but not only does Desolation manage to end on a natural act break, it also makes for one of the most chilling cliffhangers we've seen in years. 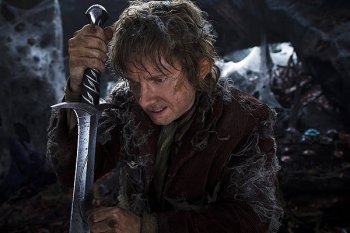 Bilbo, what did you do?What elevates Desolation above its predecessor is that it largely ditches the first Hobbit's bouncy, directionless adventure, and instead becomes a surprisingly potent study in megalomania. This film finds Bilbo beginning to understand the weight and power that his ring carries. He suddenly can't bear to be without it for a moment, and even becomes a stone-cold killer when others threaten to take it. Additionally, everyone Bilbo meets seems to be in love with his own ego. Thorin (Richard Armitage) still has a laser-focus on his birthright, the hapless Master of Laketown (the always delightful Stephen Fry) rules his people from a bedroom adorned with tapestries of himself, and even the dragon Smaug boldly declares himself King Under the Mountain.

"Absolute power corrupts absolutely," as the saying goes. It's one of the guiding principles of Tolkien's work, and comes to be Desolation's central theme. Even tertiary characters like the elf king Thranduil (Lee Pace) exhibit an air of superiority simply because they can. Nowhere is this corruption more evident than in the dual villains of Smaug and Sauron, who finally reveals himself to Gandalf (Ian McKellen), because Gandalf has nothing else to do in this film. It's an indulgence on the part of Peter Jackson and his writing partners (Fran Walsh, Philippa Boyens and Guillermo del Toro), but it works. I know, deviation from the Almighty Text is a cardinal sin, but believe me, it works.

Sure, making Legolas central to the plot mostly serves to pad things out, but it's not a bad addition as far as plot devices go. Azog and his son Bolg are still roaming around the story, so it makes sense to give them an adversary while Bilbo and Thorin fart around with the dragon. And Legolas' companion Tauriel is a welcome addition to an otherwise male-centric mix. Her budding relationship with one of the dwarves is a plot thread worth revisiting in the next film. The flow of this story was already pretty fucked to begin with, so I'm willing to roll with the inclusion of an elven rock band if it'll keep things moving.

Bilbo, are you high?

All things considered, Jackson & Co. do a decent job of incorporating elves and orcs into the story. They fare less well in finding any discernable reason for including Sauron, aside from making sure everyone is present and accounted for. That said, when we see Sauron against the backdrop of all the petty men in this film asserting their own power, his purpose becomes clear. He's the personification of Thorin's greed, Bard's pride, Azog's wrath, etc. Sauron shows us the absolute evil these other characters might be capable of if left unchecked. Whether he'll play a role in the next film, however, remains to be seen. There's still a giant battle looming on the horizon, and now that we know how far Jackson is willing to go in adapting this story, anything is possible.

What I do know is that, freed from the narrative tethers of endless introductions and set-ups, Desolation is more fun than its predecessor by leaps and bounds. The sequence in which Bilbo and the dwarves escape Mirkwood by way of a barrel ride downriver is an absolute blast, even as Jackson piles on the sight gags and makes their escape sillier and stranger. This is an adaptation of a children's book, after all. And in the back half of the film, Bilbo's encounter with the dragon Smaug is a sight to behold. It's the centerpiece of the entire trilogy, and Benedict Cumberbatch lends the dragon a wonderfully wry personality.

If you're still on board with this series, The Desolation of Smaug is a welcome improvement and a whole lot of fun. With any luck, this series will go out on a high note and the Hobbit trilogy might finally shake the impression that it's simply a billion-dollar boondoggle. The Almighty Text be damned, this is good cinema.

MINORITY REPORT: I'm not a huge fan of the Lord of the Rings trilogy and I loved An Unexpected Journey for Bilbo's evolution from a coward to a hero, but I've never considered the action scenes the best parts of the series. Then I saw the barrel chase. - Sean "Keanu Grieves" Hanson