When the first Machete film opened with the trailer for Machete Kills, I thought it was another clever Robert Rodriguez joke, like Red Sonja or Sin City 2. So when my friend Eeon (of the excellent Canned Laser podcast) called me up and asked if I wanted to see Machete Kills, I thought it was a ruse to get me out of the house so someone could throw me a surprise party. That in itself was confusing, because my birthday was back in April, but I went along to this "movie" he suggested, just in case there was cake later on.

Turns out Machete Kills actually was a movie, and a terrifically boring one at that. The first act puts the film's extremely confusing plot and players in their places like a cruel scavenger hunt. By the second act, the movie is dragging like a jackal hauling a carcass through the desert. The "Machete don't ____" joke from the first film is repeated endlessly. ("Machete Don't Tweet/Machete Don't Manscape/Machete Don't Drone Strike/Machete Don't Watch the Fourth Season of Arrested Development") A bunch of prostitutes show up in costumes rejected from Sin City and act out fight scenes that were cut from Sin City. Shots are ripped off wholesale from other, better Rodriguez films and Lady GaGa adjusts her tits while speaking in Walton Goggins' disembodied voice, a full-assault sensory experience I will have nightmares about for the rest of my life. 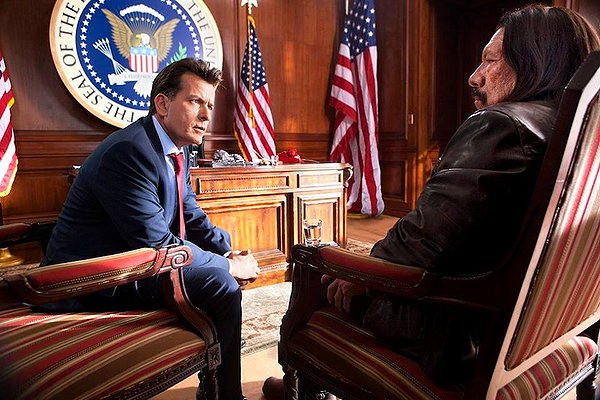 Machete even loves you, despite his better judgement.


And somewhere in the shallow, muddy puddle that is the third act, I found myself asking, of the action on screen, Hmm, where have I see that before? It took me a good minute to realize that I had seen it in the beginning of the film I was currently watching. That's how empty and soulless this movie is. I couldn't remember a callback from an hour ago.

But the movie really grinds to a screeching halt somewhere in the late second act where She (Michelle Rodriguez) teases, "I thought Machete didn't text" and Machete says, "Machete Loves Everybody." It is a line completely without context, without irony, without a place in the world that Rodriguez has created for us. Does he love all the people he brutally murdered? Does he love President Charlie Sheen? If he loves everybody, why is he making us watch this movie?

I've always admired Robert Rodriguez immensely and not just because I saw Sin City four times opening weekend. He was an antidote to the bloated corpse of modern filmmaking, real living proof that powerful movies could be made by regular people with a camera and some willing friends and a script cobbled together one weekend. His men were brooding and brutal, his women beautiful and deadly. His films balanced witty punchlines with solid action and, occasionally, scenes of pure beauty. And he makes filmmaking look like fun, a trait I believed had long since been drained out of studio productions. This is a man who clearly loves movies from the absolute core of his being. And that love still shows in parts of Machete Kills. The splashy, pop-art opening titles were hand-coddled little gems of hope that maybe, just maybe, the movie wouldn't be terrible. But all that was left by the time the credits rolled was a deranged sense of sadness. 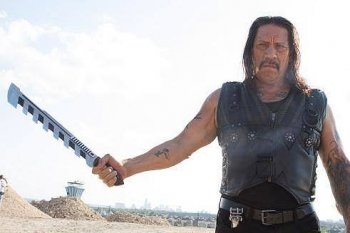 Machete doesn't love his goofy-looking knife, though.Modern moviemaking needs Rodriguez to be the beacon of hope he once was. As smaller films fall further and further by the wayside in favor of Transformers 5: Dubstep Comes To Life, he needs to lead by example, and that means not by skittering back to easy former properties. Maybe there didn't need to be three El Mariachi or Spy Kids movies. Maybe the world doesn't need Sin City 2 nearly a decade later. Maybe what we need is for Rodriguez to go back to making interesting, innovative films that remind us why we go to the movies in the first place, instead of just reheating his leftovers and slapping the Tarantino treatment on them. Machete was a step in the right direction. It was clearly a film he wanted to make, a new notch on his filmmaker's bandolier, a chance to shoot an action movie with some friends.

But with Machete Kills, Rodriguez veers dangerously into Kevin Smith territory, a bitter, Gen-X fanboy who continues to believe that, because of early success and promise, critics of his current work are just jealous assholes who don't "get" what he's trying to do. We get it, gentlemen, but the problem is that maybe you don't. Not all films need to be franchises. Not all characters need to be revisited. Four hours after Eeon and I stumbled out of the theater, we did not go to a surprise party. Instead, we found ourselves parked in front of our old dorm at Binghamton University. BU has done a lot of renovations since we graduated in 2005, converting the old cement-walled prison-style dorms into futuristic glass-walled penthouses, but Oneida Hall and the College in the Woods community is one of the last ones standing. That was the dorm where my best friend Catch and I would recite the opening Jackie Boy/Shelly scene from "The Big Fat Kill" like a secret password through pressboard dorm-room doors, where I watched Once Upon a Time in Mexico on a date with a guy who would later marry a rabbi, where we ate cheap tacos and replayed the Desperado scene where Quentin Tarantino gets his head blown off over and over and over and over, laughing like hyenas each time the bullet hit his stupid smug face.

We sat there for a few minutes. Steely Dan's "Midnight Cruiser" was playing on the radio. All the pieces were aligned for some great revelation about life and nostalgia, but nothing came. The truth is you can't go home again and that's nothing to mourn about. It's a hard lesson Robert Rodriguez should study until he gets right, because until he figures it out, he's going to keep churning out shit like Machete Kills.