It's a quiet week here for Current Releases due to massive snowfall. We don't have a roof, so we have a lot of shoveling to do before we uncover our desks. I say "desks," but they're really just dogs we tell to stand still while we balance computers on their backs. Anyway, only two movies featured this week: Side Effects, the latest (and probably not last) film from Steven "Churn 'em Out" Soderbergh; and, for dessert, a bizarre little Australian sci-fi horror called Crawlspace.

EXPECTATIONS: If you feel like you've accomplished anything this week, remember that Steven Soderbergh has made four films in about a year and a half. And that's AFTER announcing his retirement/hiatus. I truly don't want Soderbergh to quit making films, but it's not like the man doesn't deserve a break. Soderbergh is one of those rare directors who can take chances and make risky films while still remaining commercially viable, which makes him basically the most important man in Hollywood. This is a man who made people dying of the flu look cool.


When it's a story he really cares about, and not just an excuse for him to party at George Clooney's house in Italy (the Ocean's films), Soderbergh's movies will always interest me, and so I'm as excited to see this movie as I am to mention that he made Out of Sight, so people can quit reminding me that I forgot it while going through Jennifer Lopez movies two weeks ago. 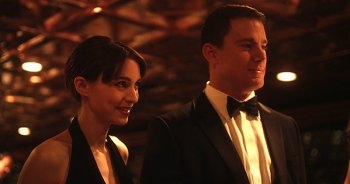 Are you sure this isn't Magic Mike 2?

REALITY: Quick America! Have a serious evaluation of our societal stigmas and general attitudes about mental-health treatments! Do it now while we're all still paying attention! Oh no, it's too late, all we care about is the post office closing on Saturday and the Grammys banning skimpy dresses! CURSE YOU DWINDLING NATIONAL ATTENTION SPAN!


Seriously, this is a conversation that needs to be had, and it's just one of many reasons why I think Silver Linings Playbook will be winning a bunch of little gold dudes in a few weeks. So I'll admit that as much as I was enjoying Side Effects, I was getting ready to switch on my patented Righteous Indignation mode, because the last thing we need is more reasons not to take medications. But like Andy Garcia in Ocean's 11, I was convinced the movie was going in one direction, while in actuality it was heading out a different door carried by Brad Pitt in a security uniform... you know, I really have no idea where I'm going with this metaphor. CURSE YOU DWINDLING PERSONAL ATTENTION SPAN

Side Effects follows Emily Taylor (Rooney Mara), a severely depressed young woman who attempts suicide shortly after her husband Martin (Channing "It's okay to like this guy now" Tatum) is released from serving a prison sentence for insider trading. While in the hospital, she begins treatment from Dr. Jonathan Banks (Jude Law), who begins treating her with a series of different medications, including Ablixa, an experimental pill recommended to him by Emily's previous psychologist, Dr. Veronica Siebert. (Catherine Zeta-Jones). Pay attention to that name, by the way, it'll be plastered EVERYWHERE throughout the film, even in some subconscious levels. It's almost like Soderbergh wants you to pay attention to this character or something.


Anyway, after Emily has a violent episode while under the effects of Ablixa, Dr. Banks finds himself under criticism for his diagnosis/prescription habits. What follows is a targeted discussion of the responsibilities that psychiatrists have to their patients, and the massive issues that face a heavily medicated society. Oh wait, no, I was wrong. That's what I thought was happening, but it turns out I was really watching one of Soderbergh's "GOTCHA!" capers. Which is probably for the best, really. 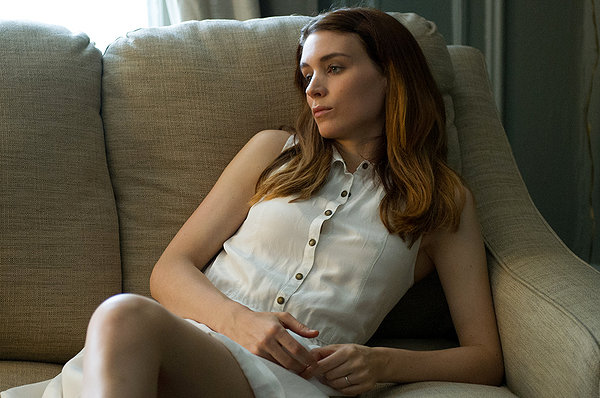 Just gonna slouch here and own this movie.


Critics have complained that as the film's plotline develops, it becomes more and more far-fetched, which is a fair point. I mean, come on... a rich person goes to jail! The main reason for this complaint is the massive tonal shift that happens about an hour in. But Soderbergh foreshadows this change throughout with his use of contrasts. He shifts abruptly from sickly yellow hospital lighting to clear pale blue; from a quiet intimate moment between a husband and wife to a painfully loud street back to a quiet office. The film is designed to keep the viewer in a heightened state of tension, and Thomas Newman's staccato score complements the abrasive nature. Soderbergh broadcasts his intent in ways that are subtle enough to be missed even by people who are supposed to be looking for them, but seem painfully obvious when you think about it the next day. 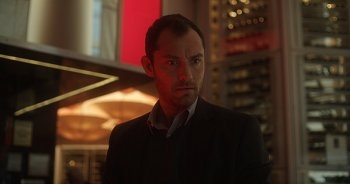 Jude Law still the no. 1 style icon for balding men everywhere.In fact, this is a film all about making abrupt switches, which is why Rooney Mara's performance is perfect and truly the film's powerhouse. The movie relies on her ability to change from weepy and weak to sexually provocative to cold and lifeless in an instant, and she delivers. It's a performance about depression that's intentionally bipolar.

There's a refined level of understatement from Mara that is almost completely absent from Zeta-Jones. She's one of Soderbergh's favorite people to work with, and I don't really see why. It feels like her performance is so weak, especially when placed against Mara, that he feels the audience won't necessarily get the point, so he has to overcompensate with costuming and tone.

There's a reason why this film is getting comparisons to earlier Hitchcock, because Soderbergh is not afraid of showing you all of his influences. Before the movie, my theater ran a preview of Bates Motel, which is apparently a "re-imagining" of the story before Psycho, featuring Norman Bates as a teenager. This means that at some point in time, an actual human being said "Let's make Norman Bates someone that today's youth can really relate to." And then a room full of executives and people with money all agreed with him.


I don't want to pass judgment on Bates Motel without seeing it, but my point is this: Steven Soderbergh's retirement/hiatus is both the best and worst thing that could happen. We need people who know how to make quality thrillers, but if Soderbergh makes good on his promise to focus on smaller projects like TV and plays, and if someone like HBO were to pick him up, we could get some of his best, most interesting and intimate work yet. To most of us, it seems counter-intuitive to step out of the director's chair while you're earning comparisons to Hitchcock, but Hitchcock did the same thing. And ten minutes of American Horror Story is enough to prove that Soderbergh's talents are needed elsewhere.

MINORITY REPORT: I once suffered very disconcerting side effects from an experimental drug. It was given to me by a Scottish witch doctor in a dark alley on a cold Wednesday afternoon. He assured me it would cure what ailed me. Since I was ailed, at the time, by a tremendous sense of lethargy, I took it immediately. What followed was a very strange episode. The only thing I remember was extreme lucidity and clarity of mind. I went to a library and read a book. I smiled at a dog. I rode a bus. Terrifying memories. - Montague "Legally Sane" Smythe