EXPECTATIONS: A science fiction film I know absolutely nothing about with a poster that looks ripped straight out of Drew Struzan's Star Wars sketchbook, and a tagline specifically riffing on Alien? Where the hell do I sign up?

REALITY: Here's another one of those exercises I was talking about a couple of weeks ago. But whereas Broken City was an average workout from a seasoned veteran, Crawlspace is a strenuous attempt to stretch the abilities of a fledgling filmmaker. The goal of this exercise is a simple one, though: "What would happen if Scanners took place aboard the Nostromo from the film Alien?" A goddamn mess. That's what would happen.

AH, here we see the titular crawlspace in use. You know you're getting your money's worth here.


For 46 years, a secret military base has been operating deep underneath the Australian outback. When things suddenly go awry, a marine unit is called in to wipe the facility clean. The operation goes smoothly until Captain Romeo (Ditch Davey) discovers his old flame Eve (Amber Clayton). Against his better judgment, Romeo decides to escort Eve to safety. Along the way, they encounter crazed gorillas in jumpsuits, pissed-off scientists, knife-happy orderlies, and human test subjects who can read people's minds. The test subjects have escaped their handlers, and all hell is in the process of breaking loose.

First-time director Justin Dix, who got his start as a droid technician on the Star Wars prequels, rips off Ridley Scott at every opportunity. Everything from the cramped quarters to the blinding white spotlights to the deep, cavernous shadows to the inexplicable overabundance of a cartoony green/red color scheme brings Alien to mind (though that last thing has nothing to do with Alien). Dix is trying his hardest to make you think you're on a spaceship, and it very nearly works. But the film takes place underground in the middle of the desert, and you're reminded of this from frame one. The film's entire game is making you think it's doing one thing while blatantly doing another.

I have to give Crawlspace credit for that, because it's the same game played by many of the film's main characters. It does a poor job of hiding the fact that its actually a film about weaponized telepathy and not an alien invasion or viral outbreak, but tries its hardest at it anyway. The mind games come early and often, yet it wants us to believe an epic firefight is about to break out for at least 45 minutes. By the time the film has already beaten its plot out of one of the scientists, we've already gotten the gist of it. Oh really? There might be aliens involved too? Who cares? Mind control. Let's move on already. 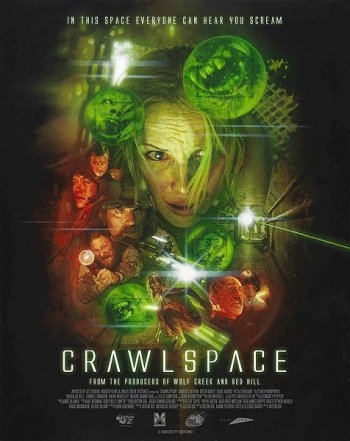 Check out this genius tagline: "In this space, everyone can hear you scream!" Sometimes you don't even need to write a joke.Of course, that doesn't stop the film from showing us bits and pieces of flashbacks that are supposed to reveal character and backstory, but only serve to confuse us as to which story we're supposed to believe. All throughout Crawlspace are little moments where we see Eve's vague recollections of her past: brief flashes of her on an operating table, a tender moment with Romeo, etc. These would be effective backstory if there weren't constantly a character in the background telling everyone not to believe anything they hear. This is sort of the point, but intentionally muddling the story only does one thing: It muddles the goddamn story.

It worked in Scanners because David Cronenberg used the mind-control gimmick sparingly, allowing us to grasp where it was being applied and from whom. Dix tries to show us telepaths getting inside other telepaths' heads, and it brings the whole film to a halt. It's disappointing, really, because the idea that a film would cast its mind-readers as unreliable narrators is an underused one. Then again, I suppose there's a reason for that. It's a unique enough concept, but Crawlspace utilizes it in all the wrong ways. Instead of using it to build suspense or give us a heroine to root for (or maybe a monster to root against), it only serves to make the film seem like a kid who doesn't know how to use his dad's tools.

Come to think of it, Crawlspace misuses most of its core conceits. Aside from completely bungling the mind-reader arc, the film even manages to waste its own title as well. You would think that with a title like Crawlspace, with a setting that includes tight passages and air ducts, that the film would at least make some mention of claustrophobia. Or at least it would make use of its tight quarters. You would be wrong, because a surprisingly high percentage of the film takes place in open corridors, empty rooms, and spacious flashbacks. This might be a petty nitpick, but when they can't even land on an appropriate title for such an oddly specific science fiction film, something has gone wrong.

I applaud Dix and his co-writers for attempting an idea like "Scanners in Space," but the digression into Alien territory and the resulting phoniness of a space movie that actually takes place underground aren't doing this film any favors. Judging by what we've seen here, the way to get the most mileage out of the concept might be to just try watching Scanners and Aliens at the same time. It would at least save you two hours, not counting the time it would take to watch Crawlspace.

MINORITY REPORT: I think gorillas in jump suits are something that every film should try to make more use of. One day they'll replace actors. - Ian "Professor Clumsy" Maddison