This week, Ian "Professor Clumsy" Maddison takes on the guntastic Gangster Squad, in which a bunch of cops go hunting for a wanted criminal. On the opposite end of the spectrum, Sean "Keanu Grieves" Hanson takes on the less-guntastic Zero Dark Thirty, in which a bunch of Navy SEALs go hunting for a wanted criminal. In other news, our secret overseer Andrew "garbage day" Miller flees A Haunted House, and Joseph "Jay Dub" Wade takes a look at Any Day Now.

EXPECTATIONS: This looks like someone wanted to remake The Untouchables but couldn't get the rights, so they compensated by gathering the most impressive ensemble cast they could muster, shoving them into desperately cool period costumes and giving them all guns. There's nothing wrong with that, though.

REALITY: Gangster Squad has its problems, but it manages to be an entertaining action comedy. It takes its inspiration from The Untouchables, rinses it in a bowl of The Seven Samurai and freshens it with a cup of Lethal Weapon. There are plenty of gags and an almost slapstick approach to violence, but after a while it starts to get a little tiresome and there's not enough humanity in there to keep you interested. 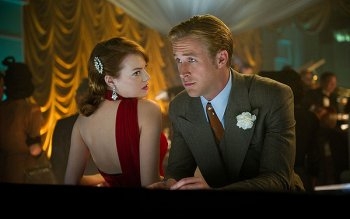 Obligatory "Hey, girl..." joke goes here."Every man wears a metaphorical badge," explains L.A.P.D Sgt. John O'Mara (Josh Brolin) in his overly explanatory opening narration, "but sometimes those metaphorical badges are also literal badges that you don't wear, but you still wear the metaphorical badge, because that's an important thematic element you need to remember. Another important thematic element is that the differences between those badges can be blurred when they are badges of violence, which is what I and Mickey Cohen (Sean Penn) have in common. Now that I've explained the film to you, you needn't pay too much attention." I'm slightly paraphrasing, of course, but the gist is dead on.


Gangster Squad is bookended by these narrative pieces that just love to explain the film to you. I can't help but wonder if this decision was made because someone somewhere thought that Gangster Squad might be too cerebral for the kind of person who would want to see Gangster Squad. This in itself is balmy as hell: When they're evoking so many cinema classics, you'd think that they'd expect their audiences to be cinema-savvy enough to figure out what's going on.

Explaining films is supposed to be my job, though, so I'll have at it: After we are introduced to Cohen murdering the cast of Prison Break, police Chief Parker (Nick Nolte) calls O'Mara into his office and charges him with the task of starting up a clandestine Gangster Squad to take Cohen down. He gathers impulsive Sgt. Jerry Wooters (Ryan Gosling), genius Officer Conway Keeler (Giovanni Ribisi), Wild West style gunslinger Max Kennard (Robert Patrick), rookie Navidad Ramirez (Michael Peña) and butt-kicking beat cop Coleman Harris (Anthony Mackie) and sets out to turn crime fighting into warfare. 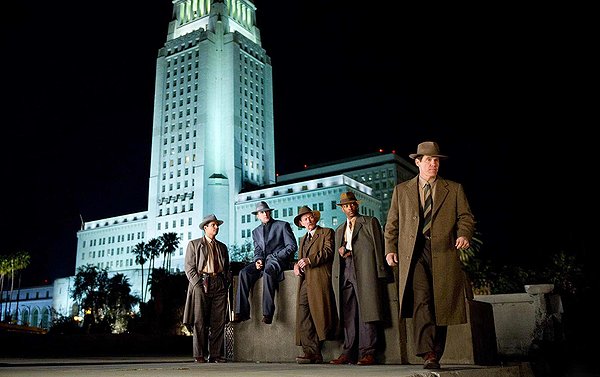 They're really more of an Anti-Gangster Squad, but I guess that doesn't look as cool on a poster.

Very few of these characters get any kind of embellishment. Jerry has a bit of a fling with Grace Faraday (Emma Stone), Cohen's etiquette coach. Keeler is a technical whiz with a family, Kennard is a two-hundred-year-old pistolero, Ramirez is a young and eager Mexican, and Harris' only character trait is that he carries a knife. That's all you ever get to know about these guys, as about 98% of their scenes in this film involve them shooting gangsters or breaking inanimate objects. It's a shame because there's a really fantastic cast at work here and a lot of them are criminally wasted, especially Peña and Mackie, two actors I admire who don't really get anything to do here other than blend into the ensemble. They're angry, they're tough, that's it. 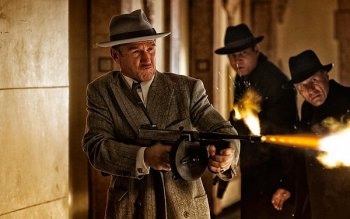 Yeah, there's a lot of this stuff going on.The thing is, that's all you really need. Gangster Squad draws a lot of humour from its tough-guy shenanigans. O'Mara will happily walk into a dangerous situation without a plan or a weapon and end up on top through sheer violent gusto. It appears at first to be a vaguely nostalgic call back to a time when men were men, but it soon becomes apparent just how absurd that is when every scene ends with gunfire, punch-ups or the destruction of furniture as these guys go out and face death without any idea of what to do next. Characters' deaths are played for laughs; every set piece is followed by Cohen taking his anger out on his lackeys; and the cinema auditorium echoes ceaselessly with the sound of gunshots. For all the fun and silliness in its early scenes, it eventually starts to feel rather repetitive before the end.

The problem is, almost every joke in the film becomes a running gag. It's like several episodes of a Saturday morning cartoon tacked together. The good guys win by the skin of their teeth, make some wisecracks and then the bad guy berates his henchmen while growling "I'll get you next time, Gangster Squad... Next time!" Then they do it all over again until the film ends and the moral of the story is explained to the kids in the audience. "So you see, Cohen's metaphorical badge and my metaphorical badge were really the same, but my literal badge stood for more than violence and... basically what I'm saying here is that good guys have to win because they're fighting for what's right even though the fighting itself is bad."

"And knowing is half the battle!"

MINORITY REPORT: Mickey, if you really want to get rid of the Gangster Squad once and for all, you have to get one of your goons into the White House. Once he kills the president and wears his face, you can have him exile the Gangster Squad to the middle of nowhere with Channing Tatum! Works every time! Ahahahaha... - Cobra Commander