Carlos Mencia Is A Fag

A huge fag. Carlos Mencia is only on the air so people will watch him on Comedy Central and say "Well, I guess 18 episodes of MadTV a day isn't that bad."

Carlos, if you're reading this (and you very well may be, since the SA Forums Goons were in a tizzy after you stole an animated gif from here a few months back), let me tell you something: You are not edgy. You're not funny, either. When you inevitably die of some drug overdose like all second-rate comedians do, you'll be relegated to finding groupies for Bill Hicks to fuck in hell, you coattail-hanging wannaspic. Mitch Hedberg won't want to hang around with you even if you have bags of uncut cocaine hanging from the heroin syringes sticking out of your eyeballs.

As you all probably guessed SA Forums member Crok did the artwork for this week's update. If you're so inclined you can check out our past collaborations in the Gingerdead Man review or the National Daily Student update. Here are a few pieces of work that I couldn't find space for: 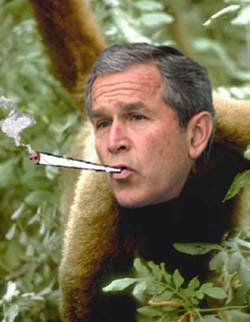 It is a little known fact that my proofreaders at the forums write 90% of my stuff and only leave the additional 10% in to appease me. Since I keep promising them a thank you and I just love circlejerking it up in my Daily Dirts, here is the one and only time I will ever namedrop any of them.

I think that's it. If I forgot someone, I'm sorry -- I'm just incredibly overworked! Just kidding! I hate you and I hope you die.

This week the two-part zombie series went underway with a review of "I Was a Teenage Zombie." Next was going to be "Day of the Dead 2: Contagium" but it was so boring it was impossible to review so I'm probably going to go to Blockbuster and rent a copy of "Zombiez" instead. That or "Children of the Living Dead." Either way, the people behind "Contagium" are possibly the most untalented people in the world, and I'm considering Reid "Frolixo" Paskewasixczcxz when I say that.

See you all in a few weeks!