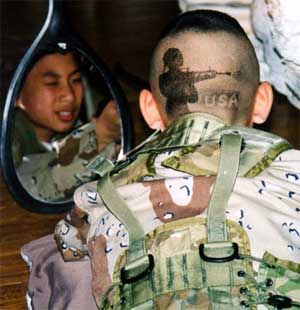 I decided to officially start this summer off with an article which would equally offend everybody, an update about religion. I tried to stay away from the time-honored Internet tradition of "only bashing Christians," because jeez, that gets old really fast. Go to any Livejournal and you'll find some drooling, pasty-faced idiot bitching about how close minded Christians are and how they are dumb and he is smart and blah blah blah Christians suck. Well here's a shocker for you Chancy: fundamentalists in EVERY religion stink. There is no monopoly on ignorance held by fundie Christians, it's equally spread over every country, every language, every set of beliefs. The only difference is that Christians do it in your own backyard, therefore making it some unspeakable crime against your big fat open mind.

Speaking of open minds, I expect to get a lot of hate mail from atheists as well. A lot of the more vocal atheists have absolutely no problem bitching about close-minded religious zealots, somehow overlooking the fact that they themselves have become exactly what they hate. The act of not being a religion has become a religion to some, and they're more sensitive than any Christian can ever become. It's weird.

I didn't write today's update with the sole purpose of pissing people off. Believe it or not, I never do anything just to piss people off, because that's hardly ever funny. Oh boy, you made somebody angry over the Internet, you're a real big man Kyanka. I like poking fun at religions / non-religions because they're just so goofy to people on the outside, and I don't think religious folks see that. It's like, once they're enveloped into the bubble of the church, they cannot imagine how distorted their image looks to somebody on the outside looking in.

But anyway, back to the whole "pissing people off" deal. I'm sure somebody out there will say, "but Lowtax, what about TruthMedia Reviews? That exists just to piss people off!" Stuff like TruthMedia Reviews are funny to me, not for the review itself, but for the reaction of the diehard zealots who choose to defend a product or company who doesn't give a shit about them. The humor comes with parading their hate mail out for the world to see, so everybody can witness just how insanely aggravated these people get when somebody insults a video game or movie or something else meaningless. Or our lives defined by the release of Square games? Can we truly find meaning in an operating system? Do you define your existence with your web browser? If the answer to these questions is "no," perhaps you should think about why one ignorant person's comments on the Internet have any meaning to you at all.

I am a Faggot

I just now realized how pathetic my WinAmp playlist is. It's all Sega Genesis songs in .gym format. It's like eight hours of Genesis video game music looped nonstop, even from games I've never played or seen. I honestly can't think of anything more pathetic offhand, really. If you ever think your life is really sad, just say to yourself, "at least I don't listen to Sega Genesis music."

Speaking of retro games, I've been looking for some good action / puzzle games, such as Tetris, to play with my wife on MAME. We've been mostly playing Magical Drop, Money Exchanger, Puzzle Bobble, Tetris, and a few other retarded Japanese games. Anybody know of any related MAME titles? Please email me with suggestions!

I really enjoyed it. Make no mistake; I loathed Episode I and Episode II, but I really enjoyed Ep. III. To this very day, I still haven't successfully watched all of Ep. 1 or Ep. 2, and I doubt I ever will, because the idea of watching a film dedicated to space politics and cardboard romantic interests does not appeal to me. But Ep. III, I just really liked it. Yeah, the lizard chase was silly, and yeah, there were plotholes and factual errors and shit, but hell, I didn't buy a movie ticket thinking I was walking in to see a documentary. It's a popcorn flick, there for pure entertainment, and it serves its purpose well. Turn off your brain and enjoy the movie the way it was intended, as an action-packed science fiction film.

On a related note, people still send me flame mail. I'm not really sure why; I've never actually gotten pissed off at an email sent to me. I think some people still hold some hope that words they write will really aggravate me. Oh, ha ha, I am not funny! That's a good one. Ha ha, I am ugly! Ha ha, my wife is a mail-order bride! Ha ha, nobody likes me! Take that, old man Kyanka!

Here's my philosophy: I don't care what my non-peers think about me. I don't care if somebody with a Yahoo email address thinks I'm untalented. I don't give a shit if a Counter-Strike player hates Something Awful. It really doesn't bother me if a Juggalo wants to beat the shit out of me. It would be one thing if a writer of another large humor site I respected put me down, but really, the Internet is full of millions of people, most of which who have no idea I even exist, and some of which loathe my very existence. I'm not going to give any dope with an email client the ability to make me upset and ruin my day. If somebody wants to piss me off, they'll have to try hard and not recycle the same generic garbage insults I see every day. Yes, I know I'm not funny. Yes, I know I'm ugly. Yes, I know I'm untalented. Now that we have that out of the way, I can go about writing and continuing to do things I love to do, without having to worry about the negative opinion of coold00d4823.

This same outlook should apply to the people who run sites featured as the Awful Link of the Day. Oh wow, some unpopular humor site nobody reads wrote bad words about your website. Boo hoo, how will anybody ever survive this scathing and unwarranted attack? Here's how: stop caring what other people think about you if they're just putting you down. If you're doing what you love to do, nobody should have the power to make you stop. Well, I mean, within reason; if you love to stick flaming police batons up seven-year old girls' vaginas, then obviously you should stop. But if you're writing erotic Star Trek / ALF crossover slash fiction, and that crap really does make you happy, don't let one person or one website destroy your dream. However, you should be prepared for people to make fun of you, and you should develop a thick skin, because the Internet is full of people who simply cannot wait to see you fail. Hell, the whole world is full of people who are powered by other peoples' misery. Why do you think reality TV shows are so popular? People don't care about who WINS something, they only care about the people who LOSE. Nobody ever talks about, "boy, did you see that POPULAR REALITY SHOW last night? Can you believe how happy the girl was when she won?" No, the talk around the water cooler is how immature, how evil, how bratty the loser was. It's far easier for humanity to bond through hate and scorn than it is through love and understanding.

That's not a bad thing, that's not a good thing, it's just a human thing.