When You're Glomping the Whole World Glomps With You

Monday, May 30, 2005 by Zack "Geist Editor" Parsons (@sexyfacts4u)
On Horsell Common, the Martians continued hammering and stirring, sleepless, indefatigable, at work upon the machines they were making. Now and again a light, like the beam of a warship's searchlight, swept the Common - and the Heat Ray was ready to follow. In the afternoon, a company of soldiers came through and deployed along the edge of the Common, to form a cordon.

That evening, there was a violent crash and I realized with horror that my home was now within range of the Martian's Heat Ray. At dawn, a falling star with a trail of green mist landed with a flash like summer lightning.

This was the second cylinder. 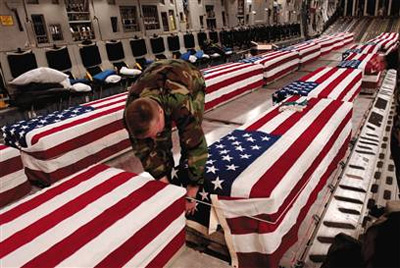 Bent double, like old beggars under sacks,
Knock-kneed, coughing like hags, we cursed through sludge,
Till on the haunting flares we turned our backs
And towards our distant rest began to trudge.
Men marched asleep. Many had lost their boots
But limped on, blood-shod. All went lame; all blind;
Drunk with fatigue; deaf even to the hoots
Of disappointed shells that dropped behind.

GAS! Gas! Quick, boys!-- An ecstasy of fumbling,
Fitting the clumsy helmets just in time;
But someone still was yelling out and stumbling
And floundering like a man in fire or lime.--
Dim, through the misty panes and thick green light
As under a green sea, I saw him drowning.

In all my dreams, before my helpless sight,
He plunges at me, guttering, choking, drowning.

If in some smothering dreams you too could pace
Behind the wagon that we flung him in,
And watch the white eyes writhing in his face,
His hanging face, like a devil's sick of sin;
If you could hear, at every jolt, the blood
Come gargling from the froth-corrupted lungs,
Obscene as cancer, bitter as the cud
Of vile, incurable sores on innocent tongues,--
My friend, you would not tell with such high zest
To children ardent for some desperate glory,
The old Lie: Dulce et decorum est
Pro patria mori. 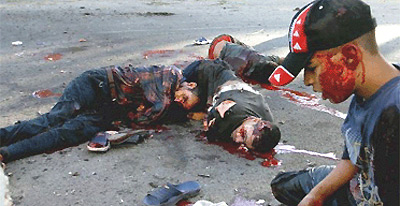 I considered just posting the poem without commentary, but these days that sort of thing is a bad idea so I'll explain myself. Owen's poem, to me at least, isn't about the politics of war and how war is wrong, it's about how war is absolutely horrible for everybody involved and the real glory of it is for people not participating. I'm sure he would see the grim reality of his poem reflected in suicide attacks, beheadings, civilian casualties, and improvised bombs leaving burning HUMVEEs by the side of the road.

Are you righteous? Kind? Does your confidence lie in this? Are you loved by all? Know that I was, too. Do you imagine your suffering will be any less because you loved goodness and truth?

Right and wrong, good and evil: those are false dichotomies for politicians. The soldiers of every side in every conflict share in the bitter bond of death and carnage that accompanies the grim traveling carnival of war. We all begin as little fat babies, we all learn to do as we believe is right, and we all end as dirt and dust. On this Memorial Day I will remember the men and women of the United States who have lost their lives in war and then I will take a bit longer to remember our fallen allies and our vanquished enemies. 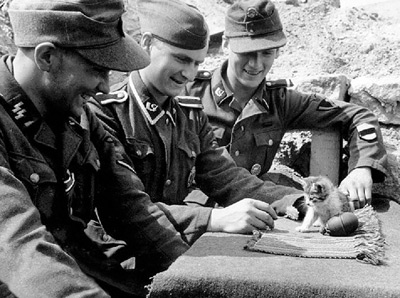 At least one good thing has come from war: awesome videogames! Thanks for your sacrifices throughout history, warriors of the world! Your misery has proven to be my pleasure.

I have been playing the addictive and gorgeous Silent Hunter III for the PC lately and my mind is frothing with U-boat terminology and strategy. The worst part of Silent Hunter III? Hardly anyone plays it so I have no one with whom I can share my feats of derring-do in the game. Like just yesterday I stalked a huge British convoy at periscope depth for almost an hour. Even at flank speed they were bearing away from me and it took a long time to catch up. Because of an unsatisfactory angle of attack my first spread of torpedoes went into the pack and did nothing other than alert the ships to my presence. This summoned the destroyer that was at the head of the pack and it immediately started sweeping for me. I fired off my torpedoes at it but the damnable thing was weaving back and forth at almost 20 knots and all of my shots missed. I did hit two freighters purely by chance, although even then one of my torpedoes was a dud.

I dove deep and ran silent to escape, right? Wrong! All ahead flank, blow ballast, and surface dramatically right in front of the fucking destroyer. Wham, like that I was on the 88mm deck gun and I was slamming shells into the gun turrets on the destroyer like I was punching a timecard. The captain must have gone brown trou from that. Of course the destroyer was much more heavily armed so even though my fire was precise I was getting hammered pretty bad by the destroyer and the horribly inaccurate long range fire from the handful of armed cargo ships. Over the course of about a minute I knocked out everything but the machineguns on the destroyer and put my damage team to work repairing the fairly severe damage done to my own Type VIIB. Defanged, the destroyer was listing and ablaze and I turned my attention to the armed freighters. 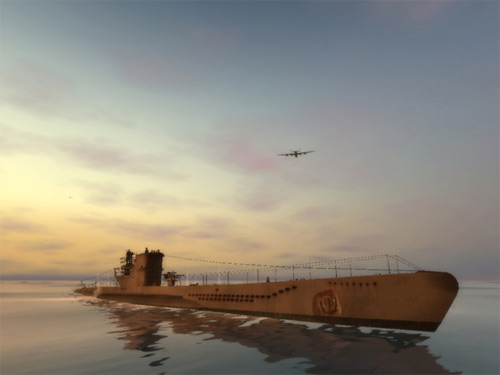 I took their guns out of commission as the destroyer brewed up and went under and I was left to move among the cargo ships to dispatch them at my leisure. I ran the deck gun out of ammo until I was sinking ships with the illumination star shells and the dual 20mm flak gun. With one ship burning and several left unscathed I considered a ramming campaign to finish them off. Then I checked my sub's hull integrity and saw that it was at three percent. Oops! Sorry, Hitler! That patrol's tonnage finally put me above the last two U-boat commanders on the aces list ahead of me. Ten ships, including a destroyer, with my deck gun. Beat that Gunther Prien. I'm fucking headed to Scapa Flow next and I'm going to make your mission there look like juice break at Kindergarten.