Adventure MH-1: The Breeder Bombs was the first stand-alone adventure module for Marvel Superheroes. It was written by Marvel Super Heroes creator Jeff Grubb, who would go on to heavily influence TSR's questionable products throughout the 1980s and 1990s. Marvel Super Heroes posed a challenge to gamers and the authors of modules. Grubb decided with this particular questionable product he would replace dungeons and wilderness with...not really anything. The Breeder Bombs features a selection of playable X-men and takes its cues from the comics of the time. It is divided into a series of short chapters that provide a thin excuse for super heroes to battle one another in every scene. The adventure is so simplistic it made us wonder if there was enough room between the BAMF! and SNIKT! for a "thinking man's" role-player like Steve to have fun. 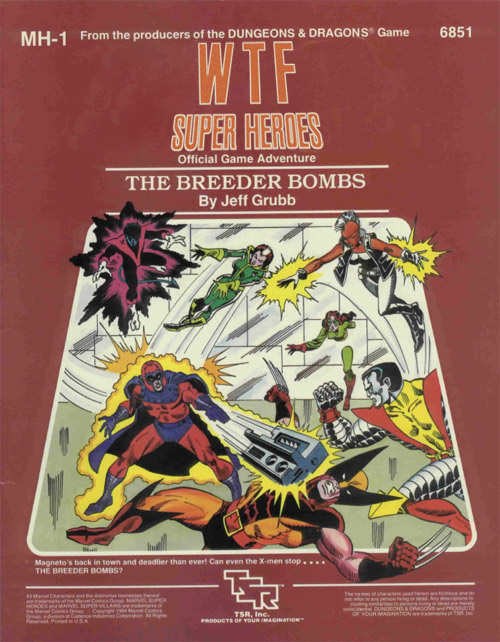 Steve: I'm playing Wolverine. Don't even need to look at the book.

Zack: Actually you're going to be playing all of the characters at once. Wolverine, Colossus, Storm, Nightcrawler, Rogue, and fan-favorite Ariel.

Zack: I was wondering that to so I looked it up. Kitty Pryde was known as Ariel for like one issue of the X-men, apparently during the brief time this adventure came out. What makes this really confusing is there is another character named Ariel that existed a few years later and she is the one listed in the Monster Manual type books for Marvel Super Heroes.

Zack: According to Wikipedia Professor X called her Ariel, but she didn't like it so she changed her name to Sprite, neither of which anyone remembers because her name was Shadowcat for 25 fucking years.

Zack: Also according to her Wikipedia page I learned that "Kitty Pryde appears in the X-Men/Star Trek crossover novel Planet X. In it, she is examined by Geordi La Forge, who notes the similarities between her ability and the chroniton displacement he and Ro Laren experienced in the Star Trek: The Next Generation episode 'The Next Phase'."

Steve: Ensign Ro dude, the first Bajoran, think about the effect on DS9, hell the impact on the entire Star Trek canon, all associated with Kitty Pryde.

Zack: And the author of Planet X was, are you ready for some Guy de Maupassant shit...Jeff Grubb.

Steve: WHOOOAAAA dude. I'm freaking out a little bit here. That is awesome.

Zack: Oh, wait, I misspoke. What I meant to say was I have no idea who wrote Planet X because it's a fucking novel about the X-men and Star Trek and I would rather die from dicks than read something like that.