If you were the sort of lowlife that hung around hobby shops and gaming stores in the mid-1990s you probably remember seeing a dusty copy of Synnibarr sitting on the shelf. You might have even picked one of the 477-page copies up, marveling at its possible uses as a bludgeon, door stop, or walnut smasher. Then you put it back, because no one in their right mind ever played it. Synnibarr is the creation of Raven c.s. McCracken, who envisioned it as "single-book system." This means taking every stupid thing you can think of in every roleplaying game ever made and distilling it into a single potent elixir of bad. The game was terrible, maybe the worst, which is why it is perfect for WTF, D&D!? Special thanks on this one go to loyal reader Ajoxer, who went to the trouble of sending us a review copy. 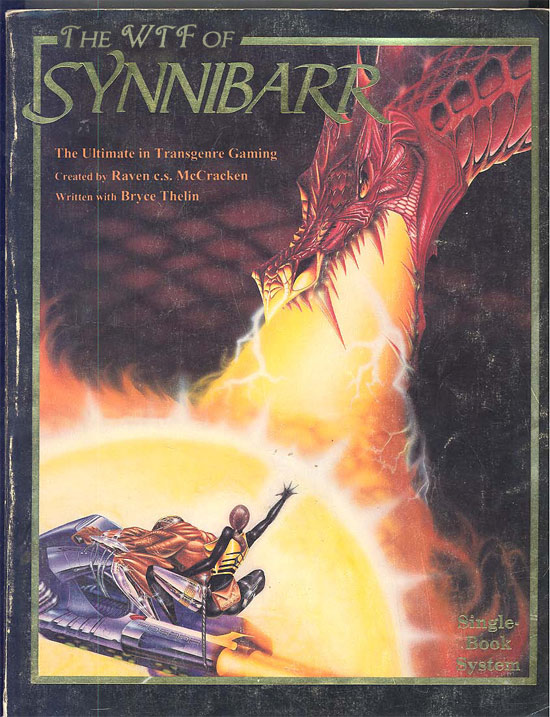 Zack: According to page "ii" the cover illustration was done by Andrew and Alex Posada. It depicts "a thermal drake breathing fire on a Mutant driving an antigravity bike while a Mage Warrior blocks the flames with a shield."

Steve: If only the Posadas had been able to work in a wicked skeleton king.

Zack: Readers, savor that description. In a book that seems to abhor brevity, there is your concise and accurate description of Synnibarr.

Steve: You forgot the part where you and your friends spend an entire day making your characters.

Steve: That part was implied.

Zack: So here we are, Steve. At long last. We stand before one of the monuments of 1990s roleplaying gone wrong. The magnum opus of Raven c.s. McCracken.

Steve: I feel sort of excited.

Steve: What? No! That was so long ago. Like seven or eight or nineteen years ago or something. I have had sex so many times with hot babes I can't even recall such a distant primordial epoch.

Steve: My boner has been around so many ladies it's ridiculous, is what I'm saying. I am laying babes constantly. All week. I'm taking a break to do this.

Zack: Thank you for taking a break.

Steve: You're welcome, but I needed the rest. Because my boner is on fire from all that rubbing on babes. On their boobs and heads, etc.