The Fantastic Artwork of Frank Frazetta

Fantasy art legend Frank Frazetta died on May 10th, 2010 at the age of 82. For more than 50 years Frazetta has produced fantasy and science fiction artwork for books, movies, and comics. Frazetta defined the entire genre of fantasy artwork as we know it and We have Frank to thank for staples like oily homoerotic barbarians and barely-clothed (or not-at-all-clothed) damsels in distress. Artists like Boris Vallejo and Don Maitz only wished they could be Frank Frazetta. We salute Frank on behalf of all those who loved fantasy artwork and comic covers they had to hide from mom. 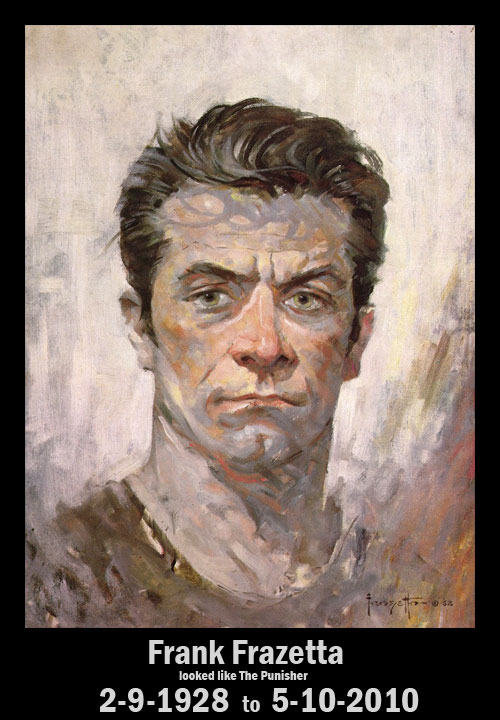 A Special Message From Keith: Today I am bummed as hell because Frank Frazetta is dead. You might remember that I did the Hot Babe News on the Barbarian's Dojo podcast with Steve. Well, Frank Frazetta really influenced what my definition of a hot babe is: she's pretty close to naked, she's stacked as heck and she's sorta draped off my leg. Frazetta's babes were some of the best hot babes and the HOTTEST hot babes of all times, and I'm proud to say that he gave me more boners than any other man except maybe Boris Vallejo. Maybe I got more boners from Boris Vallejo, actually, but you could always feel the quality of a Frazetta boner. -- Keith

Steve: This is weird seeing his face. I never really knew what he looked like. I guess I always figured sort of like Dumbledore or maybe that guy from The Princess Bride who got tricked into drinking the poison.

Steve: It turns out he looks pretty much like a badass dude. Like the sort of dude you'd see in someone else's regular painting doing some badass saint stuff like getting whipped by cronkites or chased into a bee's nest or whatever the Bible bad guys were always doing to saints.

Zack: The Retribution of St. Andre the Giant. "You killed my family Hulk Hogan!" and then he puts on a skull singlet.

Steve: Not Andre the Giant, dude. And you're the one who put the Punisher on the picture.

Zack: Since you're our resident fantasy art expert everyone probably wants to know how you felt when you heard the news. Do you remember what you were doing?

Steve: I know exactly what I was doing. I found an old all-lead Dragon Ogre figure from Citadel I painted solid gold with a red head when I was like eight, so I had that soaking in the Simple Green and was getting my paints set up. Decided to check in with bashcraft on kotaku, you know, find out what was going on in Akihabara. You can guess what happened next.

Zack: You picked up some kotaku merch emblazoned with curvy anime babe kotaku-tan?

Steve: No dude I read Frank Frazetta died. After that I didn't even have the heart to paint and I forgot my dragon ogre in the simple green and it ended up looking like a centaur mannequin.

Steve: So are we going to celebrate his art or what?

Zack: Yes, sorry. I was just reading his obit on Kotaku. Did you know that Legend of Zelda series illustrator Yusuke Nakano lists Frazetta as an inspiration? I hope Frank got a chance to play Twilight Princess so he could see his art come to life.

Steve: Yeah, it said he died from a stroke after having Mother's Day dinner.