Since WTF, D&D!? debuted we have received numerous emails from readers begging us to cover Palladium's Rifts role playing game. Folks out there seem to have a love/hate relationship with Rifts. Or maybe they just really love to hate it. If you're not familiar with the title, don't worry, Zack didn't know all that much about it either and had to rely on Steve to fill in the details. 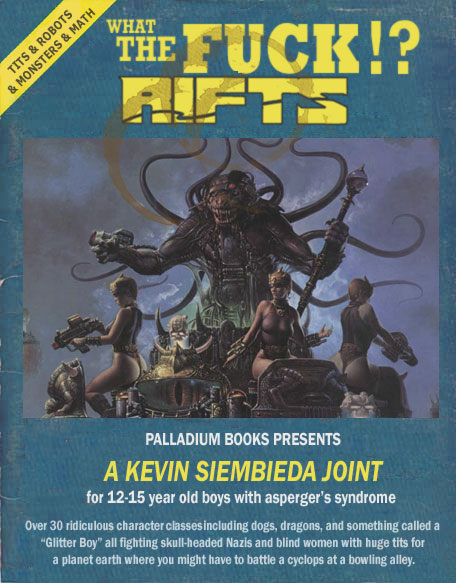 Steve: It's sort of that.

Zack: Palladium. Those were the guys back in the 1980s that lucked into a jackpot with the Teenage Mutant Ninja Turtles RPG. They licensed it when it was just a comic, probably for practically nothing, and then made a mint after those goddamn turtles started showing up everywhere. They even had their own pies!

Steve: That's right. They made that and Heroes Unlimited and Robotech. There were some other games too, but Rifts is their big one now.

Zack: They had their own fucking pies, Steve. Full of pudding.

Steve: I barely remember those.

Zack: I have heard of Rifts, but it came out right as my nerdiness was diminishing very slightly. I know it's a similar system to all of Palladium's other games, but maybe you can explain it in twenty words or less.

Steve: Uh, 20 words? Okay. It's a totally awesome game about everything, in the future, after an apocalypse, with magic.

Steve: Well you set those parameters! This is freaking Rifts, dude! Way too complicated for 20 words or less. You might as well ask, "What is TV about?"

Zack: TV is a marketing vector for stuffed crust pizza and the prescription drugs you have to take so that it doesn't blow out your heart by age 30.

Steve: Oh, yeah, that really helps Dr. Negative. Look, Rifts is totally postmodernistic. The dudes at Palladium were like, "Yeah, jeez, Turtles rule, and so do Robotech robots and also super heroes. Let's take all that and combine it with Dungeons and Dragons, set it in the future on planet earth, and make it so we can add in anything else we want."

Zack: Ah, so it's like they didn't just rip off D&D, they ripped off everyone!

Steve: No, no, it's original. Like all these portals open and monsters and other dimensions start coming through. So you can have anything. Like there's this bug army of aliens that comes through and this robot army sort of like the Daleks and then you've got the factions on earth. It's unlimited!

Zack: Okay, so you're the expert. Where do we start? How do we tackle Rifts?

Steve: You've got to start with the Coalition.