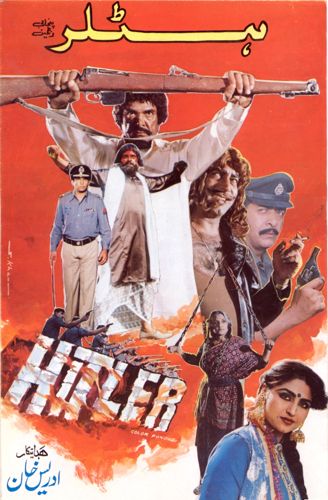 Zack: Ah, now this is JUST how I remember Hitler. Hitler was a corrupt Mexican police chief, right?

Dr. Thorpe: This is the story of World War Two, as it was meant to be told!

Zack: I like the inclusion of the sneering permed Frenchman. No movie about Nazis would be complete without a villainous French scoundrel.

Dr. Thorpe: And, of course, an Afghani warlord.

Zack: And a Hindu woman with eyeliner. Those babes were everywhere during World War II.

Dr. Thorpe: The guy on the left looks like he's just back from the yacht club, and he's about to go play a round of golf.

Zack: I was going to say that he looks like the guy who helped me pick out treated wood for my garden deck at the lumber barn. Hitler: fascist dictator and landscaping expert. Lebensraum was just a reference to Hitler's lust for topiary gardens

Dr. Thorpe: Somehow he doesn't seem to fit in with the warlord, the Frenchman, the Hindu woman, the fat messiah, and the mustached officer. But then again, what DOES fit in this picture? It looks like it was cobbled together from ten different low-budged action movies.

Zack: I'll tell you what would fit in. Santosh. What movie about the Second World War wouldn't be made instantly better by a marauding fat-girl seducing and flesh eating pan-dimensional horse monster? Imagine the tense depth-charge scene in "Das Boot" and suddenly Santosh appears in the torpedo room and starts trying to hit on some pie-faced girl in a sari. I know "Saving Private Ryan" would have been awesome. Tom Hanks could get to the top of the bunkers and look out at the landing field and say "yes it is...quite a view" and then Santosh could loom up to fill the frame and the horror of battle would be eclipsed by his piercing human eyes.

Dr. Thorpe: Yeah, he'd definitely carve an impressive swath of destruction right through this mess. Then again, what movie wouldn't be better with a pan-dimensional horse monster? Imagine him kicking ass in "The Remains of the Day."

Zack: Yes, Merchant Ivory should really look into incorporating Santosh into all of their future scripts. They could really stand to be punched up a notch.

Dr. Thorpe: Maybe I'll stick him in my script for The Bacchanal of Illusion.

Zack: Do you think you can train a horse to comb a woman's hair?

Dr. Thorpe: Well, since I have to train him to eat people too, I think the combing will be the least of my worries.

Zack: The hard part will be tearing Kahahkahah away from his cronjobs long enough to yell and tear some rubbery guy in half.

Dr. Thorpe: Speaking of which, if there are any eccentric millionaires looking to finance the greatest masterpiece in the history of human expression, you should e-mail me right away. I'm willing to start shooting "Hitler: The Baccanal of Illusion" right away. Also, guys with two heads should be aware that I'm casting a part that requires a guy with two heads. Preferably bearded.