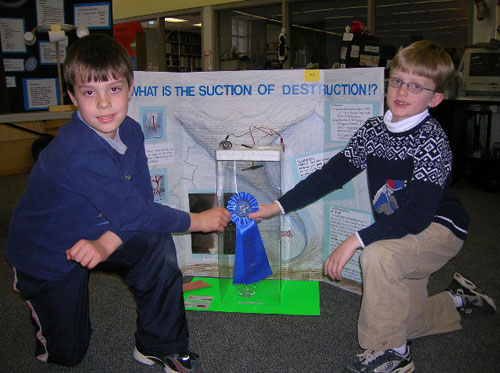 Zack:I knew this one girl, worked the docks in Hong Kong...well, let's just say when she donated bone marrow they picked it out from between her teeth.

Dr. Thorpe:That's a blue ribbon right there, boy howdy. Sometimes when they need to get the particle accelerator started down at Fermilab, the scientists just put her mouth around one end of it and tell her to do her thing.

Zack:Before you know it they've got a whole Trojan full of quarks.

Dr. Thorpe:She's already got some antimatter floating around in there from when she was working on a particularly recalcitrant case and she sucked so hard she momentarily inverted the cosmos.

Dr. Thorpe:She's a little bit like a black hole. Not just because she sucks pretty hard, but because she's let herself go a little bit in the past few years and now a teaspoon of her weighs a ton.

Zack:Man I just realized, my hooker prices seem really low. I don't think I have updated my mental hooker menu since Doctor Detroit.

Zack:This is pretty much exactly what these two kids are going to look like until they start going bald.

Dr. Thorpe:I think the one on the left already is. Look at that hairline. He grows his bangs long to cover it up, but something's going on up there.

Zack:It's going to be bowl cuts, lame turtlenecks and Velcro sneakers for the next thirty years. They'll be dressed like this when they lose their virginity to a woman in a wheelchair at a Linux seminar in Oslo.

Zack:"Open source isn't just a content model, it's a way of life." "Could you move my legs? I think you're cutting off the circulation in them and I don't want to get gangrene." "No, it's okay, I came as soon as I said open source."

Dr. Thorpe:WHAT IS THE DISTRO OF DESTRUCTION?

Zack:Linux: the only thing grandmas understand less than homosexuals.

Dr. Thorpe:That won't be the first time those two concepts have been put in the same category.

Zack:I wonder how many gay Linux advocates have gotten revenge on their homophobic grandparents by "fixing their computer" by installing Linux? Probably not many, because they would probably think they were doing grandma a favor. "So what if she can't use anything or do anything with it? It's open source now!"

Dr. Thorpe:"Imagine how cool everything is going to look once somebody writes drivers for your video card! Hell, your eyesight isn't so good anymore anyway, just feel around."

Zack:"I installed an open source clock, open source word processor, and I put an open source Hearts game in there for you to play. Only thing, it's in ASCII characters and you can't play online with your friends anymore. See you next year, grandma!"

Dr. Thorpe:Hey, do you get the weird feeling like this experiment is the prequel to "SPURT"?

Zack:Or maybe they agreed to share research. "We'll gather all your data sets if you help us conduct our experiments. Starting with us."

Dr. Thorpe:Man, these little motherfuckers are real-life pimps, cuz. They get more play in a wack-ass turtleneck than you'd get in a fine suede vest over a purple silk shirt, you dig?

Zack:They get more ass than a rendering plant next to a mule farm.

Dr. Thorpe:They get more booty than a suburban bronzework studio.

Zack:They get more gash than the US cavalry at Little Bighorn.

Dr. Thorpe:They get more Poon than a Chinese phonebook.

Zack:They get so much action if they follow the law of conservation of energy the whole world be recoiling and staggering around like a crackhead.

Dr. Thorpe:They get more tail than a trash can next to an encampment of beaver fur trappers.

Zack:They get more play than a Hokey Pokey tape at a skating rink

Dr. Thorpe:They get more trim than a guy who lives upstairs from a barber shop and he's good friends with the barber and he's really fastidious about his hair.

Zack:They get more panties wet than a diuretic at an old folks home.

Dr. Thorpe:Man, I would love to see one of those kids do that to some woman. I know it sounds like some Man Show shit on the surface, but I think with one of these kids it would just be, like, profound.

Zack:"Hey, shorty, you know about the suction of destruction? Yeah, you feel me."

Dr. Thorpe:"Let me just show you this diagram. It's written in Braille on my dick."