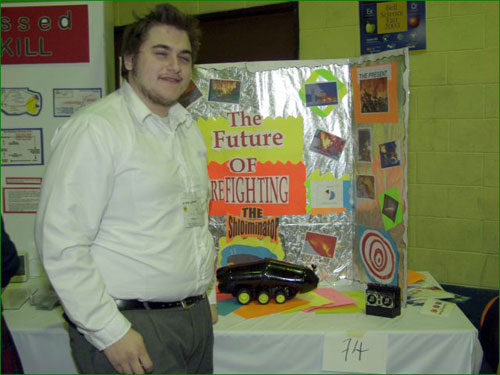 Dr. Thorpe:The future of firefighting: getting really friggin stoned and peeing on a building and then realizing it's on fire and totally putting it out with your pee, wouldn't that be crazy awesome? I bet they'd give you, like, some amazing car...

Zack:Man, if I had a sweet ride that was like, six wheels, and all black, I'd call it the Shloiminator and I'd just cruise around in it through every time vortex I see. Maybe like, I stopped Hitler and invented the peanut and a bunch of other sweet stuff, but I just haven't gotten around to it yet. Did you think about that?

Dr. Thorpe:I like to think all the tin foil on there is carefully flattened Wendy's wrappers.

Zack:I think this is the guy they based that Donnie Darko movie on.

Dr. Thorpe:Maybe his mom is some insane packrat and she irons them all and saves them. Being an insane packrat would explain why she didn't furiously wash out Shloiminator Sr's reproductive fluids with club soda the minute they entered her cavity.

Zack:When you eat something poisonous most of the time you vomit. I wonder if there is a vaginal equivalent to puking? I'm sure the Japanese know the answer to that question.

Dr. Thorpe:Yeah, but you left the door to that joke swinging wide open. Just like your mom left her vagina before it puked you out. Man, I almost feel kind of bad about that dude, I'm sorry.

Zack:Don't you have another article to write for your Hoboken newspaper or something? System of a Down is shitty? Really? Genius. Thank you, I've got another smash hit book to write.

Dr. Thorpe:99.9% of customers who viewed My Tank is Fight (available for pre-order now from Kensington books) eventually bought: "The Encyclopedia of Stupid Redneck Irony Shit" by Maddox.

Zack:99.9% of the ads in the back of your free rag are for phone sex lines run by the Russian mob.

Dr. Thorpe:And 99.9% of their calls are from you, because the only people who will listen to you hawk your stupid book are people who you pay 2.99 a minute to listen.

Zack:Oh, really, I'm a bird's asshole? Because I'm pretty sure that's the closest thing to an eye that has ever been pointed at the Weekly Dig.

Dr. Thorpe:You'd better collect that bird shit to process into fertilizer and make bombs out of, because that's the only way you're going to get copies of My Tank is Fight! (available for pre-order now) to fly off the shelves. I just don't think the literary world has a place for a book of its caliber. Well, they did have a place, but they filled it up with copies of the Atari "E.T." game a couple decades ago.

Zack:There is no way it can compete with Da Capo's Best Music Writing 2006, currently soaring to 100,000 in books at Amazon.com. How does it feel to have your work fill the same tome as that guy from Entertainment Weekly who wrote that 20 best of 2005 article in which he compared the Black Eyed Peas to the Beatles?

Dr. Thorpe:I'd better call the Shloiminator, because I just got flamed.