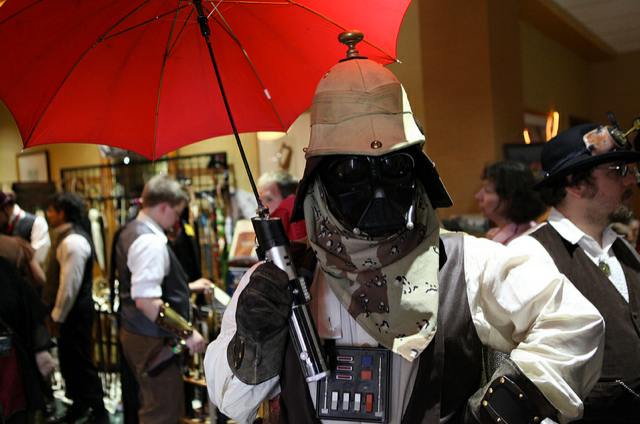 Dave: It's lame enough to go to a Steampunk convention, but it's somehow even lamer to totally do it wrong.

Zack: He's the girl in the peasant costume at the ren faire who never looks up from her iPhone.

Zack: On the other hand, there is this whole insufferable subset of steampunk that obsesses over reimagining every fictional character as a steampunk version. Like there are probably elaborate brass Darth Vaders, so credit to this guy for sticking a broken umbrella in his toy lightsaber and just rolling with it.

Dave: I think "reimagining" is the worst trend of the 21st Century. Oh, cool, you made all the characters from Futurama... as anime characters! Out of Lego!

Zack: You haven't lived until you have seen genderswapped Star Wars characters in steampunk costumes. Also I am not sure this is the steampunk convention. It might be the awkward conversations between fat guys in vests convention.

Dave: I don't think so, because there would be way more fedoras at that convention. I only see one fedora here, and it might actually be a bowler.

Zack: Yeah and it has goggles on the brim. A dead giveaway.

Dave: Dude, imagine the cast of Harry Potter... as fat guys in vests! Drawn like the Simpsons!

Zack: All the characters from Dr. Who having awkward conversations about retro video gaming and small batch IPAs, only as fat women.

Dave: Sure, but here's the 8-bit version of that.

Zack: Set to the chiptune version of the Soviet national anthem.

Zack: Here's what it would look like if Sherlock Holmes was a woman in Tokyo. Correction. Victorian Tokyo.

Dave: I've considered it, and I've decided that if you're going to take your nerd horseshit seriously enough to hold a nerd horseshit convention, at least have the balls to eject the scofflaws. This is YOUR horseshit! Defend it to the death!