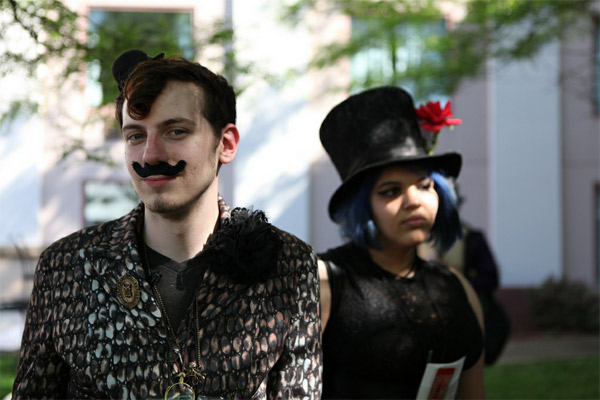 Zack: These two weren't even there for the convention. They were just filming the video for some twee indie rock band with an animal name.

Dave: That's really weird, I was thinking the exact same thing. I'd almost be OK with this if they were just a band with a really whack sensibility.

Dave: Either they're a band who's really trying something, or they're steampunks who are barely trying at all.

Zack: They're working on their concept album about laundry girls in 18th century New England and the story of one who goes wandering in the woods and encounters a murderer and meets a spirit who is an owl.

Dave: He's got the costume pragmatism of an experienced touring musician. When your fake mustache is really shoddy, it's a good idea to carry a patch of spare mustache fiber upon your person so you can just yank off another one.

Zack: Next up is their album about World War I. Because 24-year-old kids from Vancouver surely have something valuable to say about the horrors of poison gas attacks.

Dave: I'm sure they made some OK art about World War I at the time, but today's analog synth arpeggio technology makes it possible to go way deeper.

Zack: What we really need to convey the pants-shitting terror of charging across an open hellscape at a machine gun is three gospel-trained black women doing backing vocals.

Dave: We're trying to recapture the stark minimalism of starving in the trenches, so I put masking tape over all the pads on Zya's 808 except for the handclap.

Zack: We can sing a letter a shell shocked corporal writes home to his young bride conveying the sickly sweetness of rotting corpses and also Brenth will play the wine-o-phone.

Dave: I feel like we have a really personal connection to this project, because Derek's grandpa was in the first Desert Storm.

Zack: Yeah, he earned his purple heart for dropping a tray of deviled eggs on his foot while he was stationed in Saudi Arabia. Did you know in Saudi Arabia they call them "Jew eggs?"

Dave: See this thing on my lapel? This is the medal he got for watching a video of a missile hitting a truck.

Zack: This one is the one he got for rigging up a tape deck to play in the truck they used to bring folding chairs to Kuwait City. They called it the "Thunder Run" because the only tape they had was a Cassingle of Thunderstruck.

Dave: Oh, and this thing on my shoulder is the same hank of raw mustache Saddam Hussein used at the time.