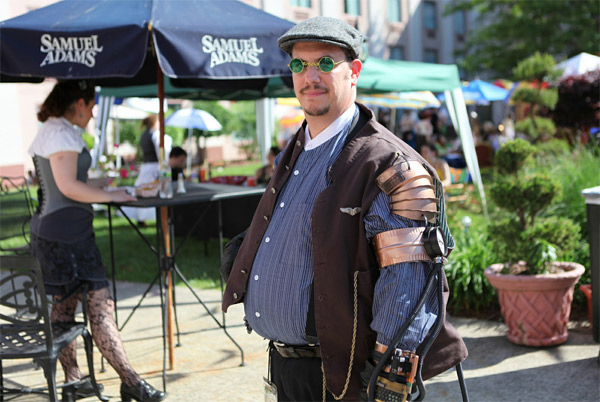 Dave: Here's a reimagining for you: what if Matthew Lillard's character in Hackers... became an alcoholic?

Zack: This is what happens when you forget to unvelcro the blood pressure cuff at the Walgreens. You walk off with it still on your arm and turn into a fat investment banker from the 1880s.

Dave: I want to give this guy props for one thing: you see a lot of big oversized shoulder plates out there in the post-Liefeld world, but this guy is holding it down for classic shoulder plate modesty.

Dave: That shoulder plate is just a hair above pathetic. Maybe that's why he's giving the photographer that look, cause he thinks they're going to be the 50th person to ask about it.

Dave: YES, I KNOW. They were out of husky men's shoulder plates, OK?

Zack: I bet you he stood in front of a mirror for like ten minutes arguing with himself whether to go tucked or untucked on that shirt.

Dave: This is a man who's bad with big decisions. That's why he's wearing a belt and suspenders.

Zack: No, I think that was probably the right call in his case. Maybe even go double suspenders.

Zack: I can imagine him hooking his thumbs in the suspenders and bragging to some other fat guy in a vest about his stock trades. "Yeppp, I deal mostly in tech stocks. Just cashed in my 401k and bought a ton of Yahoo."

Dave: I bet the alternate-universe Victorian era is the smartest time to buy Yahoo stock.

Zack: Huh? Now is the time! Yahoo is making their own browser based on Angry Birds that will run on Blackberries in 2013.

Dave: He's gonna cash in all his dotcom millions and invest it all in the next big fashion trend: glasses that make your eyes look super far apart. Fetal alcohol syndrome chic.

Zack: Not a bad investment. If you had fetal alcohol syndrome, for decades your only option for sunglasses were those comically giant ones they put on horses in movies.

Dave: You ever see the guy from Hoobastank in sunglasses? He looks like a hammerhead shark.