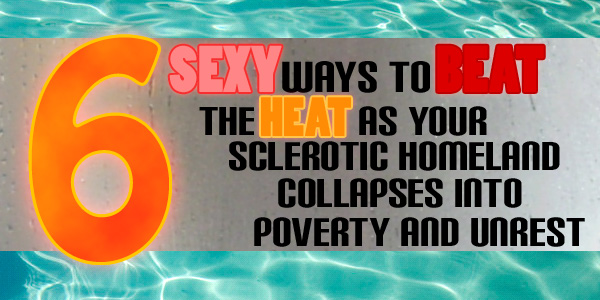 And just when you thought that global warming business was debunked, it's another record scorcher of a year. The American South is turning into a desert and the Midwest is going tropical. Temperatures are rising from Greece to Portugal, California to D.C., so what are you going to do to escape this terrible heat as your nation, once vital and great, succumbs to the weight of centuries of mismanagement and descends into a living nightmare of poverty, panic and techno-oppression? We've got six sexy ways to help you cool off! 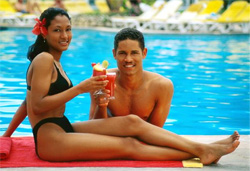 6. Be sure to drink plenty of fluid

Did you know that for every degree of temperature over 90 Fahrenheit you are supposed to drink an extra 24 ounces of water per day? It's probably true. Be sure to stay hydrated and do not drink alcohol excessively. We know that the news is worse every day and you just stare into that bottle, like a mouth you wish would swallow you up, hoping that you could drink enough to drown and never wake up again, but you need to drink twice as much water as alcohol.

Hopefully worker furloughs and government shutdowns haven't halted your local water delivery. If the taps are dry, you can get water the old fashioned way from one of many fine beverage retailers: kidnap the families of employees and threaten them with box-cutters if they don't hand over bottled water. 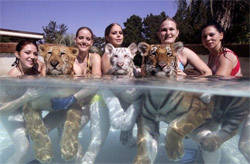 Overpopulation and suburbanization have caused the decline of freshwater levels throughout the first world and desalination requires prohibitive amounts of energy. Sounds bad, and it's far worse than you know, but the good news is the discharge of medicine contaminated sewage into our fresh water, coupled with ever-declining water levels, have created a soup of anti-depressants, human growth hormone and particulate plastics.

Swallow enough the next time you go swimming and you'll come out of the toxic treacle a grinning boulder of inappropriate musculature armored with empty soda bottles. Who needs to cool off when all that Ambien and Cialis runoff has turned your perception of the world into a gauzy dreamland of misguided lust. 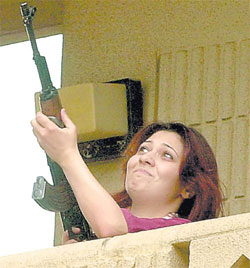 4. Shoot guns into the air

According to Dr. Phil's website's article comment section, releasing stress is a great way to cope with the symptoms of heat exhaustion. If you start to feel shaky or extremely thirsty, might we suggest letting off a little steam by raising your favorite death-dealer skyward and emptying off a magazine's worth of pent-up frustration.

You've watched your job slip away, your debt mount and now this heat? Nobody is going to give you a break, so you need to take it yourself, one bullet fiesta at a time.