Last week, Michael Richards appeared on the Late Show with David Letterman to apologize for his remarks to the six-legged deer. Here is a transcript of his statement. 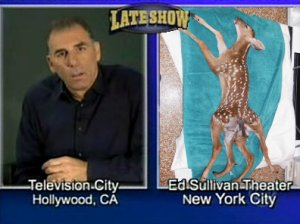 "It's not what you think.

"No really, it just slipped out. I saw you eating my suet ball and lost my head. I don't think you're a mutant. And that reference to John Carpenter's The Thing, I don't even know what that means. I have nothing against six-legged deer. Having six legs is great. It makes you geometrically correct; you fit perfectly inside a golden rectangle.

"Plus, I bet you run really fast. Sure, all deer can, but I bet you haul ass. Not because you have six legs, but because you look really athletic. You must work out a lot. You can probably leg-press 400 easy. Or at least 350. I couldn't do half that, even if I did have an extra set of freak legs.

"Crap. I did it again, didn't I? I'm sorry. I guess I'm not used to six-legged deer, just the four-legged kind, or the two-legged kind in The Far Side.

"I'm probably the least racist person you'll ever meet. Which is what's so silly about this. It could be a Seinfeld sketch, if NBC would return my calls about bringing the show back. Fortunately, I have other ideas. How about a chef who teams up with a cop to solve food-related crimes? I'd be the chef, who's sort of offbeat, but dead serious about his job, because I can play serious. I can play anything. 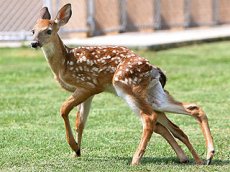 "What was I saying ...? Oh yeah, I'm not racist. If I saw you on the street, I wouldn't look twice. Or if I did, it'd be in admiration. I've always wanted an extra limb. Like an extra neck maybe. I could play a circus freak looking for a girlfriend, except when he finds her, she has terminal cancer. So - get this - he lops off her head and attaches it to his extra neck. She becomes his "other half" literally. It'd be a romantic comedy, co-starring Marisa Coughlan as the head. No sequel though, since it's kind of gimmicky and I'm anything but a one-note comic.

"Diversity. That's what I'm all about. I've been reading the literature of your people and it's fascinating. I never knew Bambi was a book. Disney butchered it by taking out the German existentialism. I also read some deer poetry. Great stuff. Especially that sestina where the six words are leaf, rock, dirt, grass, tree, and poop.

"Anyway, I'm sorry I offended you. As penance, I've donated a thousand dollars to the National Wildlife Federation. Hopefully, they'll cure your condition someday. And if you want to snack on my birdseed again, help yourself. If I've learned one thing it's that there's too much hate in the world. We need to love all people, whether they're black, white, Hispanic or sextopod.

"What? I hear them use that word all the time. If they can say it, why can't I?"