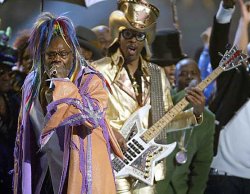 Last month was Baltimore's Farpoint Science Fiction Convention. I doubt you knew that since, unless I'm reading this pie chart backwards, only 1% of this site's readers are nerds. I unfortunately am a huge nerd, so I went.

I was nervous when I arrived. My Neo from The Matrix costume consisted only of a pair of sunglasses and a blank expression and I was afraid of catching shade from other convention-goers. As always when I get anxious, I started craving drugs. This might be because anxiety so closely resembles drug withdrawal. Or maybe I just really like drugs. I scanned the crowd for anyone who looked like they might have some meth, heroin or tek. In a room full of people dressed as aliens and Victorian-era prostitutes, drug users are hard to spot. Unless, of course, they're cosplaying as fellow Matrix characters. Drug enthusiasts have always identified with the Matrix films, just as the gay community has always identified with The Wizard of Oz and, to a lesser extent, the TV show Oz.

When I saw a girl dressed as Trinity, I knew she must have what I was looking for. I approached her and said I was a friend of Morpheus, the code Matrix fans use to solicit drugs. She smiled and motioned for me to follow her behind a partition displaying steampunk top hats and cogs. 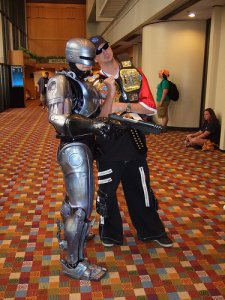 I think Robocop was hiding in this guy's pants.At this point my Farpoint experience took a turn for the worse. Most people don't know this, but science-fiction conventions aren't actually the lawless free-for-all they look like in photos. Many are monitored by security guards and even undercover police officers. "Undercover" in this case meaning in plain sight: As Trinity and I finalized our drug deal, we were accosted by a narcotics officer in a Robocop suit.

My accomplice and I were hauled out of the hotel to the nearest police station. The police tried to trap me in a web of circumstantial evidence, consisting of blurry photos, a blurry surveillance video, and a blurrily signed confession of my crime. They ultimately let me off with a warning. If they ever saw me again, they wouldn't hesitate to throw me in jail. It was a hollow threat, but to move things along, I treated it with the requisite amount of fear. To be honest, the officers' menacing voices did actually scare me a little. That and the fact that I lost my sunglasses in the scuffle with Robocop were why I spent the rest of Farpoint sulking in my hotel room.

What my encounter at Farpoint taught me is that the science-fiction dream of a utopian future for all people, whether they be Klingons, Romulans or habitual users of dangerous drugs, is dead. I'm not sure what TV composer and Justice League member Alex Courage had in mind when he wrote the Star Trek theme, but it certainly wasn't this. That said, I've still decided to attend the convention next year, because in the immortal words of the apparently quite mortal Hunter S. Thompson, why not? I've already seen too much of this shitshow to not stick around. Might as well watch the thing I once loved wither and die like the Babylon 5 IP.

It's what Morpheus would have wanted.