Weddings are a beautiful celebration of two entities forming into one very special partnership which may or may not last more than 3 months. Perhaps this is old news to you, as you may have attended one of these elegant ceremonies before, or watched Ken's ending in Street Fighter 2. However, not all weddings go to plan. If you're lucky, your special day may go without a hitch (That was deliberate, I know what I'm doing, I'm a professional writing man), or you may even strike gold and find your special day captured forever as a finalist on America's Funniest Home Videos. Here are a few tales of events that didn't go to plan, courtesy of the forum goons. These stories put the "moan" in "matri-moan-y", if you didn't know how to spell "matrimony". 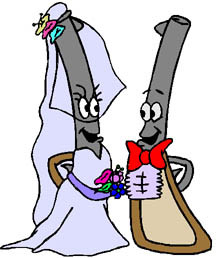 At my best friend's wedding the pastor, after the rehearsal, decided that the dogs would not be allowed, even though his dog was attending. So the groom's party had to scamper and drive the hour back to the house to drop the dogs off and everything had to be rearranged since they were the ring bearers.

He also called the groom the wrong name. Every time. Even after being corrected. The groom's name was Wes. He called him Steve. And he started chatting with someone while the hymn was playing in the middle of the ceremony.

At my brother's wedding the bride's mother tried to kidnap their children. That ended a bit awkwardly.

Elbowed my cousin's four year old step-daughter in the face on accident as she jetted across the dance floor.

One of the most amazing things I've ever seen at a wedding was the time a friend of mine had to have her appendix out the Wednesday before the wedding, and while they were at it, they found cysts of some kind that had to be removed as well. The doctors said no way was she going to make the wedding, but everything was paid for, people had flown in, and she was one of those girls who had waited her whole life for the wedding, and by God, she was getting married.

You know how there's usually about half as many people at the wedding as at the reception? Not this time. The tiny little church was overflowing. The march started up and there she was, pale as a ghost. She wouldn't take any pain meds before the ceremony, either. She walked all the way down the aisle between her father and her brother, and then they sat on chairs for the bulk of the ceremony.

It was simultaneously awesome and terrifying. I half expected her to rip out all her stitches or something. It was a stupid thing to do, but impressive nonetheless. She sat in a wheelchair at the reception and her new husband wheeled her around, and they left early.

When I was giving a toast for my sister's wedding, I forgot the toast. I just said a minute-long speech and sat down. The MC edged his way over to me and whispered to say "Let us raise our glasses", which I repeated flustered in front of a room of two hundred people. It was my first toast, sue me.

I worked weddings for a bit. It taught me an enduring hatred of what I still consider to be the lamest type of party ever created.

We had the legendarily bad Groomsman speech. "So like David and I were hanging out, and he was like, 'I'm not sure whether I should break up with Rachel or not' and he was all down on Rachel but then like wow look how things turned out... I mean heh, we all thought he'd end up with Cindy or something... And this one time when we were all TOTALLY wasted..." One middle aged dude turned to his eight year old daughter and told her that she should memorize this speech because if she gave something like this when her brother got married, he would disown her.