It's a familiar scenario: you're walking through a field or house or area of some sort and are attacked by a Dalek. "How do I stop this evil menace?" you think to yourself and anyone else who might be reading your thoughts. Fear not, here are 49 can't-miss Dalek-killing strategies. 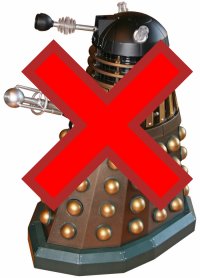 1. Lure it into a field of watches with a rock in the middle, causing it to form a reverse-watchmaker analogy against the existence of God, depressing it to the point of suicide.

2. Tell it that you'll let it take over the world if it gives you a penny. It will think you're joking at first, but be persistent. Keep repeating the offer, being more emphatic each time. Finally it will do whatever Daleks do that's the equivalent of shrugging and give you a penny. Immediately point at it and start laughing. It will self-destruct out of embarrassment.

3. Flush it down a giant toilet.

4. Ask it if it's heard of culture jamming. Take a Culture Club CD and jam it in its eye. Now it has.

5. Dress up as a 1950s housewife and throw dishes at it until it dies.

6. Create a compilation CD called "Rock Against Daleks" featuring the hottest artists of yesterday and today.

7. Feign romantic interest in it but then slowly drift away, sealing the entrances to your heart one by one until it becomes a broken skeleton of a person. Then hit it with a crowbar.

8. Convince a hungry bear that it's a trash can.

9. Find everything it enjoys in life and systematically remove these things from its life.

10. Use ventriloquism to make it say dickish things to other Daleks until they shoot it.

11. Get drunk with it at your sister's graduation party. When it says it's driving home, shrug and say "Okay, see you tomorrow." 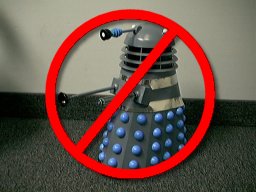 12. Just as it's about to kill you through the windshield of your moving car, hit the brakes.

14. Destroy it on a quantum level by making all its atoms spin in reverse.

15. Use it as a shuttlecock in a giant badminton game.

17. Send it to a futuristic theme park where nothing can go wrong. Except it does.

18. Perform the exact sequence of actions performed by Uma Thurman in Kill Bill, except on a Dalek instead of Bill.

19. Find its secret lust and murder it in some ironic way based on that lust.

21. Challenge it to a knife fight - against itself.

22. Create a Dalek costume and commit a series of Dalek-themed crimes, forcing it to run from the law and eventually track you down to an abandoned warehouse that you've rigged with booby traps and explosions. Realize this plan is too elaborate and shoot it in the head.