SA: In the final scene, when all the bad guys are being sucked into the Vortex of Hell (tm), the weird guy in back seems to be "rocking out" and waving his arms in some of the cuts, and in the other ones he's just holding onto the woman in front of him. Why did you choose to leave this continuity error in?

MF: Because it's even less satisfying cut any other way. Continuity gaff obviously wasn't caught until we were in post. I could have chosen to go with the wide shot alone, but the effect wasn't good enough. (It's not good enough as it stands right now, either. But believe me, if you have to watch that wide for more than 6 seconds, the effect starts looking even cheesier.) There had to be a cutaway to get away from the wide, and the effect in the close 45 degree 3 shot was strong enough to direct others attention away from the rock-on gaff. (You're the only person to ever see it. Did you see the even bigger gaff in the "snatch/evil goo sequence" when Amy Ballard's dress "magically" falls off? You can see the pa's arms behind her undoing the top. Nobody else ever sees that one either. Wonder why?)

SA: You use the same actresses in most of your films... what breeds such loyalty in the cutthroat business of show?

MF: While I'm always looking to work with any talented folks, I have a soft part for those who have worked so hard for us in the past for so little. My favorite "true Grit" movie story: Vamps. We had 3 important scenes to get shot at a location that we only had for 24 hours. We arrived at 10am on Tuesday, wrapped at 6am Wednesday, never had an "official" lunch or dinner break, and out of the 20 or so folks involved, NOBODY was making scale. They just believed in the project and the folks they had made the commitment with. Makes me proud of all of them every time I think about it. And that's just the tip of the iceberg. Sleeping on the floor of editing studios over a weekend of continuous work. Shooting an action piece in 95 degree heat in a virtually condemned building with no air conditioning. I've personally slept on set numerous times just to keep the gear secure when we were shooting in a questionable part of town. Our movies require incredible commitment from everyone involved, and I try to show my appreciation by being as loyal as I possibly can. 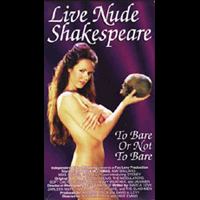 If Shakespeare had never died, this would more than likely kill him.

SA: Do you film everything in Ohio?

SA: On a scale of one to ten, one being where you started with this company and ten where you'd like to be financially and creatively, where are you right now?

MF: About 4. We've proven that we can get product done on time and on budget with an eye for established markets. Next I'd like to be able to take more than 17 days to shoot a piece. And a budget larger than a Hillary Clinton tip would be kinda nifty, as well. My partner Mark Burchett and I started B+ Productions with our meager life savings, and we hope we're getting closer to the point where larger budgets will be available. Our movies are either already in profit, or heading in that direction, and that's really the key second step (the first being that you prove that you can come in on time and on budget.)

SA: Are your movies more popular locally, nationally, or internationally?

MF: The only yardstick I can use is total sales, and we've sold more nationwide than locally or internationally, although it still amazes me that we've sold in Canada, England, Wales, Ireland, Italy, France, Switzerland, Ecuador, Japan, Malaysia, Germany, Sweden, Belgium, Portugal, Venezuela, Denmark, Australia, Russia, Mexico. Every continent but Africa. Hmmm...

(Note from editor: David Hasselhoff is also a film star in many of these countries. Draw your own conclusions)

SA: Do the actresses that tour strip clubs actively promote your work?

SA: Which movie do you feel is the best example of your work yet, and why?

MF: Sorry, but I'm not sure I can answer that. I'm proud of PARTS of all of them, and want to bury my head over parts, as well. The best dramatic story is VAMPS. The prettiest images are in Evil Ambitions. The best music is in Chickboxin Underground. Same for the graphics. The most just plain entertaining and artistically risky is Live Nude Shakespeare. The best example of low cost production is RUDE TV. Let's put it this way, I'm not thrilled with having any single piece as "the one I'll be remembered for". They all have their high and low points. My goal is to get to where there isn't a single moment where a viewer would say "Well now, THAT sucks". As it stands now, the marketplace is telling us that there are enough "hmmmm" moments to more than counterbalance the "what the hell was that?" gaffs.

SA: Thanks for the interview, Michael! Keep up the, er, work!

You can read more about Michael Fox's work at the Indi-Edge / B+ Productions website, although you might regret it.