Saturday, Sep 20, 2003 by Jedidiah (@notoriousamoeba)
Before playing Midnight Outlaw Illegal Street Drag, I didn't even think I was capable of parallel parking, let alone winning a race against a guy named after a petroleum product, but now I have the poise and confidence to live life a quarter mile at a time on the streets of adventure! This game taught me that street racing isn't about the size of your tailpipe or the number of Xs you can spell a word with, it's about the freedom you feel when you dance, dance, dance in a ring of fire. Now you too can earn the adulation and mad clown luv of your fellow racers with this comprehensive strategy guide to the only drag racing game authentic enough to contain the line "Yo, money grip, it's time to flip!"

The game will occasionally try to "flip the script" on you by secretly replacing girl at the starting line with a break dancing female undercover police officer. Always try to seduce her with your suave charm and street racing ways. Should you find that for some reason the game engine doesn't allow you to exist as a temporal entity outside of your car, feel free to reinterpret these instructions as "run her over repeatedly". 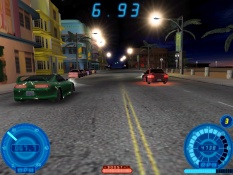 Protip: Press the 83 unused keys on your keyboard to hear hilarious farting sounds!

For more tips refer to the "Outlaw Manual" .pdf file included with the game. Now, if you grew up on the streets like Taylor "Psychosis" Bell and I, you're probably saying to yourself "Hey, I don't need no motherfuckin' manual to show me how to be an outlaw!" but trust me, you can't go wrong with something that contains advice like this:

"Sure, you can steer, but the best option is to head straight for the finish, one quarter mile ahead. If you collide with the other car, the race will stop and you'll be assessed a damage penalty. So keep your foot on the pedal and your eyes on the finish line."

You'll notice that some upgrades improve your car's performance whereas others boost your "respect" rating. That means if you die in a tragic subwoofer explosion, some of the other racers will say they're going to pour out a 40 in your honor before remembering that they're too young to buy alcohol and need to get home for their 11:00 curfew.

Spoiler - For a considerable price, the spoiler will minimize aerodynamic lift on the rear axle. This is especially helpful on low gravity tracks such as the Phobos Iridium Mines.

Tinted Windows - For a considerable price, these windows will conceal the 11 bricks of heroin you're smuggling into Florida while simultaneously keeping out such pesky intruders as light and air molecules. Be advised that this will dramatically decrease visibility in in-car camera mode until you install Car Upgrade: AMAZING X-CAM 2!! LETS YOU VIEW OBJECTS OUTSIDE OF YOUR CAR INTERSPERSED WITH A CONSTANTLY SCROLLING IMAGE OF A NAKED SUPERMODEL!! GUARANTEED TO MAKE YOU NAUSEOUS!!

Nitrous - For a considerable price, a nitrous tank will propel your car into an incredible world of high-octane thrills where the traditional laws of speed don't apply. Even though they didn't really apply to begin with, since this game's physics and collision detection code have been ported over from the Moon Patrol engine. This upgrade was officially rated "Ass-Grippingly Awesome" by a focus group of zombies who had just finished eating the brains of Vin Diesel's stunt double.