Wednesday, Jun 11, 2003 by Taylor "Psychosis" Bell
Hey there, gang! Today we’re going to try something a little different from a normal game review. You see, back when I was enrolled in Renton Technical College and attending two-hour lectures on how to make “mailto” links, a fellow student (we’ll call him “Lance” because that’s what everyone has been calling him since he was born and it would be kind of awkward if we changed it now) suggested I try Ragnarok Online, a massively multiplayer online RPG from a Korean company known as Gravity. As you probably deduced when I mentioned that it was an MMORPG, the game turned out to be absolutely horrible, and this nifty two-part article will chronicle my wonderful experiences with it.

I spent quite a while playing the game back when it was first recommended to me, and despite Lance’s repeated assurances that it would eventually become fun, it always seemed like a 2D version of Everquest created by and for anime-obsessed pedophiles. Lance’s enjoyment of the game slowly intensified into an obsession, and it got to the point where we would all give him shit about it by occasionally interrupting him in mid sentence and saying “Lance, you know what? You play Ragnarok Online.” Naturally he would respond by becoming very angry and threatening to do things such as “strap you down to a table and burn your skin off with a hand lighter” (actual quote), but despite his terrifying threats and constant attempts at convincing us that it was a great game even when no one else was talking about it, neither I nor anybody I associated with ever grew to like it. So when we had an assignment that had to do with defining an acronym and giving information on it (I honestly don’t remember which course, it was probably Technical Writing or possibly one of the advanced courses such as “Using <b> and <u> Tags 101”) I wrote the following documentation on the highly technical term “LPRO.” I thought this would be the last time I had anything to do with Ragnarok Online, but as you will see on page three, I was wrong! 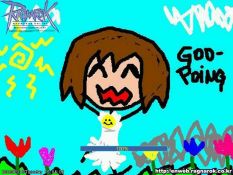 This is one of several hideous images you get to stare at during loading. Seriously.LPRO: Lance Plays Ragnarok Online

The slogan means so much to so many people. All over the RTC campus, this deep and meaningful phrase has been spoken, shouted, and written on signs that then get taped to the backs of unsuspecting people's cars. It is the most influential and powerful four-letter phrase of all time, not counting swear words and 'taco'. However, there are some people who have not yet experienced all the knowledge and wisdom that this simple phrase can bestow. Those people should rejoice, because I have written this to educate them so that they may run around yelling the slogan at the top of their lungs.

Our story begins in the beautiful country of North Korea. Boredom had hit record levels. People had no idea what to do with their lives. This was mostly because Korea has only three known national pastimes:

Killing random dogs and then eating them 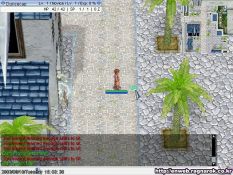 You have to love an RPG that makes you reach a certain level before you're able to sit down.Dog-eating had long ago been outlawed by zealous American animal rights groups, and their 'killing random things' skills had long ago been surpassed by Israel. Koreans needed to do something to occupy the time to fill the gaping void in their lives. A small development company known as Gravity stepped up to take the challenge. They set out to create the best online RPG known to mankind. A magical RPG that would transport the user to realms beyond their wildest imagination. A masterpiece that would transcend the language barrier and offer the world an experience the likes of which had never been seen before. But then the opium wore off and they decided to bang out a quick point-and-click game so they could collect their paychecks and spend them on dog tenderloin.