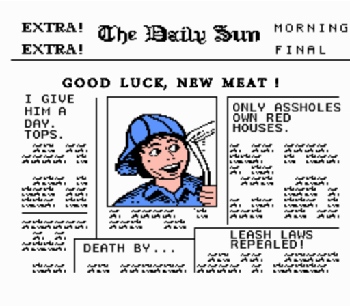 Had a pretty good day today at the new job! I guess the last guy must have been pretty bad, because once the folks in the neighborhood saw what a good a job I did, I got a brand new subscription for the paper. Carl says if I keep it up they might give me another route! One thing, though, is that the people in this neighborhood are kind of rude. I almost got hit by two skateboarders today, and one of the subscribers forgot to tie her dog up very well!

Mom seems happier today because she doesn't have to work overtime anymore. The doctor says we won't see any improvements immediately, but getting rid of the stress should be helpful. 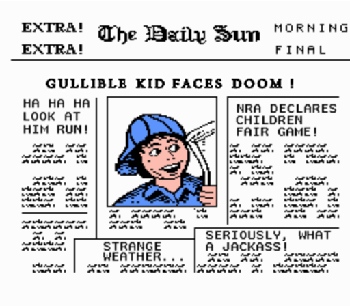 What a day! A tornado came right across the street when I was dropping off the papers, I couldn't believe it! I'd never even heard of one happening in this area before. Plus, I thought they were a lot bigger. I guess you don't need to worry too much about the tiny ones.

They were doing a lot of construction today, too. I tried to ask the workers to move out of the way but I guess they couldn't hear me over the jackhammers. That lady left her dog untied again, too! I tried to be nice to it, but it just chased after me and I had to pedal extra hard to get away. I was so concerned about the dog, I forgot to get a paper to 2217, and they got so mad they called Carl and canceled their subscription! Carl says it's okay, though. Another good day like yesterday and they'll come back.

Speaking of Carl, he played a trick on me today! He showed me a shortcut to get home even faster, but it turned out it was a weird shooting range with pools and electric gates and all sorts of stuff! I ended up getting a flat tire after I landed right in one of the pools after a jump. That's alright, mom says we can afford to get a new one this week. She says she doesn't technically need the painkillers.

I think I did something very bad today. It's that stupid dog, every day, that stupid dog. It started chasing after me like always, and I panicked and threw a newspaper at it, hit it right in the face. It stopped dead in its tracks. I think I gave it a heart attack. I think I killed it. I hope the owners don't report me to the police.

I saw a man in a dark cloak holding a scythe today, that was a big surprise. I didn't even know there were farmers so close to here! I told mom what I saw, and she started crying and said we need to talk about what's going to happen to me when she leaves. I told her she's too sick to be going on vacation right now. 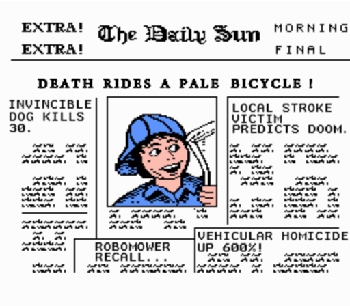 The dog is back, so I think I'm safe. I don't know what I was worried about, anyway. I don't think this town even has police. I saw a man trying to break into one of my customer's houses. Through the front windows. In broad daylight. I hit him with a newspaper, so I hope that scares him off. Unfortunately, I missed the first time, and I broke the customer's window. They canceled their subscription, and they were so mad they called Carl and Carl yelled at me about it. I tried explaining to him what happened, but he wouldn't listen. He said he won't fire me, though. Something about how I'm the only one in years who has stayed this long. It's only been four days, but it feels like so much longer.

I had that dream again, where I pass him on my bike. Back on the ground, legs fitfully kicking the air, eyes wide and staring at me, pleading for help. I'll never forget the choking noises he made, as long as I live. I should have stopped, but I had to keep pedaling. Keep pedaling.

I must be getting paranoid. We've had more of those tornadoes - worst summer in history according to the newspaper - and it feels like they're following me. They move so slowly, but so deliberately, coming right across the street, and it feels like just when I'm out of their grasp, they disappear. But that can't be true, right? It's just the weather. It can't be following me. It's probably just the stress. Once this first week is over, I'll be more used to it and things will be better. 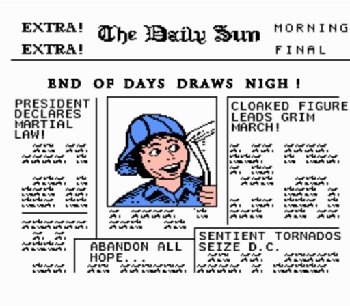 I fell three times today. A car hit me and didn't even stop. And that crazy lawnmower ... I tried to avoid it, but it kept running in circles. There wasn't even anyone behind it. I'm starting to think something is seriously wrong with this town. That creepy old mansion with the gargoyles? I swear I saw one of them move today. And I keep seeing that poor, seizing man, kicking, kicking, kicking. I thought I crashed into him today. It turned out to be a tire someone had just left in the middle of the sidewalk. I hate these people. 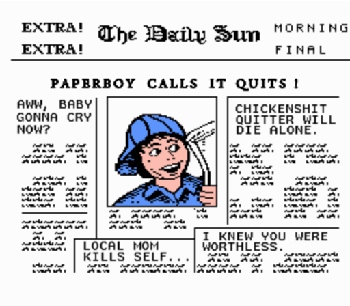