Something Awful Goes to Cancun 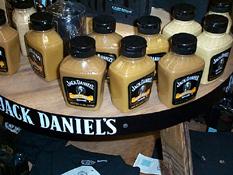 The duty-free mustard is the biggest seller in the Charlotte airport.

We eventually arrived in the Charlotte, North Carolina airport, which apparently also doubles as gigantic shopping mall. Scott and I decided to pass the layover time by reaping the fantastic savings of a duty free shop. In airport lingo, "duty free" means "stuff we wouldn't be able to GIVE away, much less sell for normal price." These stores prey on the fact that if you're in an airport, chances are very high that your brain isn't functioning under optimal working conditions, and you'll buy just about any hunk of shit with a "DISCOUNTED!!!" tag on it. This is why they sell orange parkas with the airport location embroidered on the breast patch for more money than your last home loan. Charlotte's duty free store is no exception. They proudly sport jugs of "fancy" cologne with pseudo-Italian sounding names, liquor bottles that have had up to 90 cents taken off their retail price, and various other crap that nobody in their right mind would every purchase. Like mustard. Yup, there was a gigantic stand devoted to displaying a monumental tribute to duty-free mustard. I can't even begin to imagine why anybody would purchase large quantities of mustard in an airport, but I'm not writing this during a 50-hour layover, so perhaps I'm not in the most appropriate frame of mind here.

Three hours of flying and two boxes of airline food (foam sandwich wrapped in cellophane which tastes better than the actual food) later, and we're flying right over Mexico. The Mexican air seemed almost exactly like my native California air, except for two slight differences:

1) It is not a deep hue of brown,
2) You can actually see the back of your hand if you hold it out in front of you. 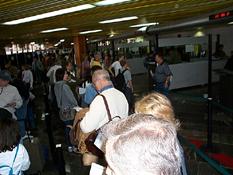 Fun with customs. Notice the lack of fun, but the abundance of customs.

I'm not trying to insinuate that the pollution in California is bad, but the biggest industry in our state is split between vehicular smog tests and exporting trash to Tiajuana. Cancun generally seemed to be remarkably different than California, and the fact that I didn't come face-to-face with dozens of Pikachu figurines within nine seconds of leaving the plane proved this.

We passed by the ever-alert Cancun customs inspectors, whose entire job description is "hitting anything in front of them with a red, rubber stamp", and proceeded to press our luck with the final challenge: the Stoplight of Doom. Before leaving any Mexican airport, you must gamble your humility away by pressing the Stoplight of Doom button, a simple red circle which determines if you'll walk out with dignity or have a guy with "AMERICA INSSPECTIONS?" scribbled on his hat rifle through your underwear bag. All people passing through must hit the button and hope the Stoplight of Doom turns green, allowing you to pass by unhindered. If you get the horrible red light, you are stopped and customs gets to inspect all the various embarrassing things you decided to bring along with you, like the strapon and duty-free mustard I usually pack. We lucked out and got the green light, so a potential crisis was averted. I could just imagine the look of horror and embarrassment on my parents' faces if Mexican officials were to reach into my baggage and pull out a gigantic bottle of duty free mustard. They'd probably disown me.

Our hotel turned out to be quite nicer than the normal rat-infested slumholes that I frequent, so I was pleasantly surprised. The hotel features multiple pools (for the really fat people, I guess), a beachfront view, and more importantly, famed performer Barry Ivan White. I wasn't able to catch his performance that night, but Scott did, and claims it was "riveting." Scott also thinks that "Return to Oz" was riveting, so I'm not putting too much faith into his review.

As I am typing this, day one is coming to an end and day two is beginning. I'm sure everybody out there can hardly wait until the site is updated with even more painfully banal events and occurrences, but I need some way to actually produce content on this trip, and a Cancun journal is the best thing I can think of. If you have any complaints, you should feel free to email them to Andrew Stine, who will more than willingly laugh at them and subscribe you to a Hello Kitty mailing list. Stay tuned for more exciting adventures, folks!